From Russia with antiquity 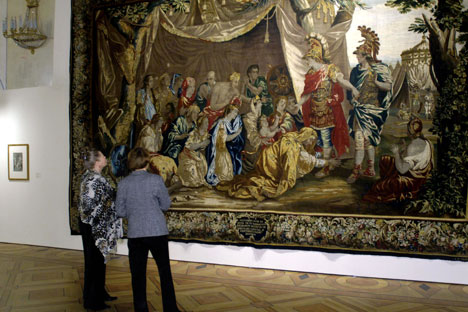 Alexander the Great, the largest exhibition ever mounted by Russia's State Hermitage Museum, has come to Australia. Source: ITAR-TASS.

Until April, the Australian Museum in Sydney is hosting an exhibition from the Russian State Hermitage Museum.

Although Russia's State Hermitage Museum often mounts shows outside its home in St Petersburg, it is an infrequent guest in Australia, and for good reason: an unusually large attendance is required to cover the costs involved in the transport, insurance and protection of exhibits.

Nevertheless, in November more than 400 exhibits of classical antiquity on loan from the Hermitage went on display at Sydney's Australia Museum. The exhibition, entitled Alexander the Great – 2000 Years of Treasures, demonstrates how Greek architecture and art spread throughout the world and covers more than 2500 years of history – from the 5th century BC to the 20th century.

Organisers have selected the exhibits to appeal to the public and they are confident that Alexander's outsized personality and his influence on the world will attract a broad audience.

The exhibition can be seen at the Australian Museum until April 28. Tickets for adults cost $24; for families (two adults and two children) $60; for children between 5 and 15, $12; and children under five are admitted free of charge.  Tickets can be bought in advance and are available online at australianmuseum.net.au.

Apart from spawning a whole subculture of myths, the story of Alexander the Great has often been used to illustrate both the success of brilliant generalship and the dangers of hubris. His armies of up to 50,000 men employed state-of-the-art military techniques and logistics to win battles against all the major kingdoms of the day, while his legend grew with each victory.

Yet as he conquered Persia and swathes of Asia as far as Afghanistan, Alexander took to drink, murdered friends he believed to be enemies, executed dissidents and turned many of his soldiers against him as he began to adopt many of the mannerisms of the gods, a heresy to the ancient Greeks, who believed in a strict demarcation between the human world and the divine. He died in Babylon (present-day Iraq) in 323BC, at the age of just 32. While his legacy lived on through Hellenistic culture, his empire collapsed immediately.

Mikhail Piotrovsky, director of the State Hermitage Museum, hailed the exhibition’s opening in Sydney as an example of ancient art’s lessons for new generations.

“Today’s world, which was once united by Alexander, is rapidly disintegrating. It’s instructive for us to bear in mind that globalisation is not always an ugly process. This exhibition is just one example of that,” Mr Piotrovksy said.

Unique exhibits at the Australian Museum, including the Gonzaga cameo and the black basalt statue of Queen Cleopatra VII, present the path followed by great civilisations during Alexander’s time: the Greek world, the ancient empires of the East and the world of nomads.

Visitors see how Greek architecture and art spread, and how the Greek language covered a vast area from Greece to India and Mongolia. Russia’s fascination with Alexander the Great dates back to Catherine the Great, who drew inspiration from his military successes.

The 18th century empress named her grandson after  Alexander, and extended the borders of Russia’s empire during her rule.

Organisers are staging a range of special events for visitors to the Australian Museum, including mosaic-making master classes, academic lectures, battle re-enactments and storytelling for children, and an exchange visit of young  people from St Petersburg to Australia.

Reaction to the collection has been enthusiastic among Australian art lovers, with reviewer Luke Slattery referring to Alexander as “the kickass king”.

“Alexander is part of our modern culture and can be seen on YouTube, in epic movies, as a character in games, and is referred to by numerous writers, artists and musicians,” Slattery quotes Fran Dorey, researcher for the exhibition, as saying.

“The last section of the exhibition brings the 2300-year-old Alexander story up to date with pop cultural objects from a number of contemporary sources such as novels, cigarette cards, stamps, magnets and shaving advertisement from the early 20th century using Alexander's conspicuously beardless face,” Slattery writes.

The Alexander the Great exhibition was first shown in Russia in the Nikolayevsky Hall of St Petersburg’s Winter  Palace in 2007 before travelling to Amsterdam in 2010.

The Hermitage’s first exhibition in Australia, Western  European art of the 5th-20th centuries, took place in 1978, and other classic collections brought here include Rubens and Italy (1992), and Matisse: Drawing Life (2011).

Australian artists have also been shown in the Hermitage; the works of Noel Counihan, Victor O’Connor, James Wigley and Herbert McClintock all travelled to St Petersburg (then known as Leningrad) in 1960.