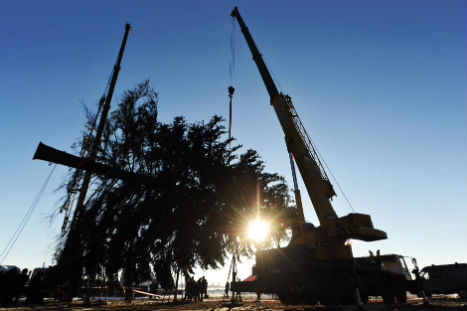 After watching Mikhail Bulgakov’s ‘The Day of the Turbines’ more than 15 times, Stalin decided to return Christmas trees to Russian homes.

Towards the end of December, the Kremlin announced the final preparations for the New Year. It said the programme for the New Year holiday would be thoroughly followed from the beginning to the end. Vladimir Putin, who had secretly been baptised by his mother at an Orthodox Church in his hometown St Petersburg, takes part in all the main events dedicated to the New Year.

Earlier in December, Russia’s main Christmas and New Year tree was cut down in the Dmitrovsky Forest and was transported to the Kremlin and installed on the Cathedral Square inside the Kremlin.

“This time, we chose a 110-year-old tree of 30 metres height, the trunk’s diametre is over 70 centimetres," Putin’s press secretary Viktor Khrekov told reporters.

“This year, it is for the first time that decoration of the Christmas tree was done not by the Kremlin office staff, but by designers, whose ideas had been selected in a competition,” Khrekov said.

The tree needed 3,600 balls of different sizes, which have been put together in ‘clusters,’ 1,500 metres of garlands and 4.5 thousand LED lights. Its upper part is decorated in white-golden colours, the medium part in blue and gold, the lower in red and gold so that the Christmas tree symbolised the Russian national tricolour flag. The tree has a crown of 1.5-metres - Wind Rose Christmas star.

A real fir tree was used in 1996-2001. But in 2001, the heavy freezing in winter forced the organisers to change plans and they used an artificial tree. While the weather in recent years has allowed for a real tree to be set up, they put the artificial tree up on Red Square.

In Russia, the main decoration for New Year's Eve is a fir-tree, with Ded Moroz (Grandfather Frost, Russia's Santa Claus) and Sengurochka (Snow Maiden). Ded Moroz is the guest of honour dressed similar to Santa Claus in a fur coat, a hat, and gloves. He carries a red sack full of presents. The only difference between Grandfather Frost and Santa Claus is his felt boots.

Sengurochka partners Ded Moroz helping him with his New Year’s duties. Her image is familiar to everyone across Russia, but her origins remain shrouded in mystery, even to Russians. In the Soviet era, the pair of Sengurochka and her Ded Moroz became a necessary part of the New Year festivities.

Today, this image in Russia is widely used both in advertising and in the entertainment industry, including strip clubs. But for the most Russians, the image of the icy princess evokes happy memories of childhood.

In Russia, the New Year's Eve is considered a children's holiday and incorporates elements of child-like theatre. It is customary for Russian families to celebrate New Year's Eve with children.

It is very interesting to know how the tradition of Christmas tree started in Russia. In 1817, Tsarina Alexandra Fyodorovna, the wife of Tsar Nicholas I, brought this tradition to Russia from Germany. Initially small fir trees were used to decorate the tables in the Winter Palace, in St. Petersburg to remind the Tsarina of the fir trees decorated with lit candles of her childhood in Prussia.

The quiet celebration in the Tsar’s family was supplemented with the custom of exchanging gifts placed around the fir tree on the table or hung on its branches. But the Tsar’s court wanted to have large trees in the city also and later all of St. Petersburg had trees and soon the practice spread throughout Russia.

However, the October Revolution in 1917 interrupted this Tsarist tradition of the Christmas tree and the midnight dinner on the eve of New Year in Russia and it was banned by the Bolsheviks, as they considered it a remnant of bourgeois tradition.  On January 24, 1918, the Council of People's Commissars issued a decree changing the calendar and shifting the New Year's Eve 13 days earlier.

The New Year's Eve became a regular working day. There were no presents either. No Christmas trees were on sale and cutting down fir trees in the wood was a crime.

However, famous Russian author and playwright Mikhail Bulgakov was the first to remind Muscovites about the Christmas tree in the Tsarist Russia. At the beginning of the second act of his legendary play, ‘The Day of the Turbines,’ the audience saw on stage a live and fragrant Christmas tree decorated with garlands and candles and heard the cracking of the candles on the tree branches, reminding people of the wonderful times.

Perhaps at that point, after seeing the tree on the stage, Soviet dictator Joseph Stalin, who saw the play more than 15 times, decided to return Christmas trees to Russian homes. He revived New Year's celebrations in 1937, the height of the purges, although celebrations marking the birth of Christ on the eve of January 7 in Orthodox tradition, did not officially take place again until the collapse of the Soviet Union in 1991.

The first Soviet tree, a 15-metre tall tree, was unveiled at the Hall of Columns in Moscow's Trade Union House on January 10, 1937. By the next year, New Year's trees were in every part of the country following the Kremlin's example.

As New Year's Eve was not celebrated during World War II, the return of the fir tree brought a carnival-like atmosphere with gifts, New Year's cards and sweets, the children's favourite. During World War II, trees were decorated with small tanks, guns, parachutists and rescue dogs. Shortages forced Soviet citizens to learn to make decorations.

After the collapse of the Soviet Union in 1991, factories making decorations found themselves without work no government orders and they were forced to take their cues from the market. For the most part that led them to Western-style decorations.

At present, the nostalgia for Soviet kitsch lead many people back to the traditional Soviet designs of so many Russian childhoods.  Moscow market stalls and kiosks, including on the pedestrian Arbat Street  and  Tverskaya Street (ex-Gorky Street), in the city’s centre,  helped revive traditional Soviet decorations, with their ballerinas, parachutists and little red tractors.

New Year's Eve parties always have had the potential to be impressive affairs. Hosts spend time and money on the food to be served at the party and are intent on making sure all guests are well fed. In some families, particular foods must be served as a part of annual custom. Some favourites include the famous Russian Olivier salad, herring dishes, and caviar and blini (pancake). Champagne is also a Russian New Year's party must.

Intimate New Year's parties and celebrations take place in people's homes throughout the break, but those who are looking for formal balls, neon dance parties, glitzy galas, or other social events find them, particularly in large cities such as Moscow and St Petersburg.