The most frequently asked questions on Yandex in 2012 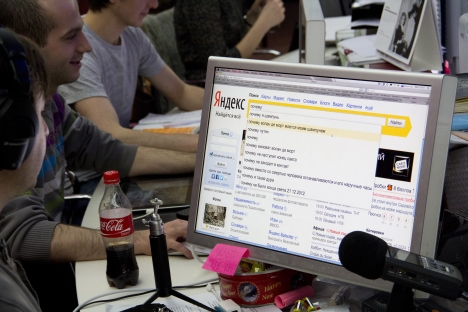 In the outgoing year, Internet users were interested in love, the Russian presidential elections, the European Football Championship, and shampoo.

The biggest Russian search engine, Yandex, has published a rating of search queries in 2012. The rating was organized under various headings, revealing that Russian Internet users in 2012 were most interested in love, the election of the Russian president, the European Football Championship and the question “Why am I Shampoo?”

Yandex divided the rating of search hits into 12 categories such as “National Leaders,” “Men,” “Women,” “Events,” “FAQs,” etc. The top subjects produced either a spike or a prolonged and sustained rate of hits.

Yandex is Russia’s biggest Internet company, with its own search engine of the same name controlling around 60 percent of the Russian Internet search market, as well as some other allied services.

The March 2012 election of the Russian president took the immediate lead in two categories. The webvybory2012.ru site, which streamed live feeds of the voting process on election day, topped the “National Leader” rating. Meanwhile, the phrase “elections 2012” topped the “Events” category.

The “Premiere 2012” category also included the iPhone5, the Boson-Higgs particle, the Lada Largus car, and the scandalous film “Innocence of Muslims,” which occupied spots two through five on the topic.

In the “Events” category, “the end of the world” came in at the bottom. In addition to the abovementioned elections, the most interesting events for Yandex users were the Eurovision Song Contest, the European Football Championship, the Olympic Games, the film “Twilight Saga: Breaking Dawn Part 2,” EGE (the Unified State Examination), and so on.

What? Who? Why? And popular memes

Users were also looking for answers to other questions. “Why is Mr. Putin a Crab?” “Why Am I such a Fool?” and “Why am I Shampoo?” were three of the most popular queries in the rating.

The most frequently asked questions on Yandex concerning films were about “Twilight Saga: Breaking Dawn Part 2,” followed by “The Avengers,” “Men in Black 3,” “Ghost Rider 2,” “Sherlock Holmes: A Game of Shadows,” and others. Users clearly were fans of movie sequels.

Questions about the scores of the Russian team in Euro 2012 were at the top of the category for the most popular matches of the year. Yandex users were not all that interested in Russian players, as evidenced by the “Athletes” category in which there was only one Russian player, Alan Dzagoev, who came in second place. In general, Russian users were most interested in wrestlers, boxers and gymnasts.

The “Men” and “Women” ratings revealed that interest in celebrities tends to surge after they die. These ratings were topped by actor Ilya Oleinikov and actress Marina Golub, both of whom died in 2012. Also remembered were Igor Kvasha, Aleksandr Porokhovshchikov, Anatoly Otradnov, Yevgeny Zharikov and Whitney Houston.

Still, the living stars outnumbered the dead in the rating.

Number two in the men’s category was billionaire politician and businessman Mikhail Prokhorov; number four was the athlete Fedor Emelianenko. The ESP specialist Vitaly Gibert was in sixth place, followed by actor Mario Casas, who is the star of “Three Meters Above the Sky.” Soccer player Alan Dzagoev took ninth place.