Lockouts don’t affect the quality of the game 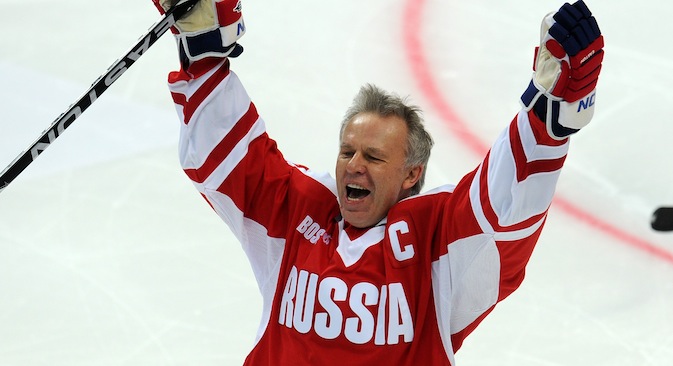 Vyacheslav Fetisov: The NHL recent events don’t affect the quality of the game. They give an impetus to players to do their best at every practice and in every game to prove that they are worth their salaries. Source: ITAR-TASS

Russian legendary defenseman Vyacheslav Fetisov argues that the NHL recent events give an impetus to players to do their best at every practice and in every game.

Russia is keeping an eye on developments in the NHL for a very good reason: many of its superstars have moved to the Kontinental Hockey League (KHL) while the NHL lockout continues. And the KHL season is in full swing.

If the NHL were to reach an agreement with its players, it is the Russian hockey clubs and fans who would suffer the most. But legendary defenseman Vyacheslav Fetisov is concerned about the NHL season for another reason. He spoke to Ilya Zubko for RBTH.

RBTH:  Given the latest news from the U.S., is there any way to salvage the NHL season?

Vyacheslav Fetisov: Only [NHL Commissioner] Gary Bettman and [Executive director of the NHL players association] Donald Fehr know this. I feel sorry for the veterans who are in their final season; in addition to not playing, they won’t even get paid.

Many of them will finish their career without realizing their dream of winning the Stanley Cup. This just goes to show how business can change so many things in your life.But I’m more concerned about another thing. They will eventually come to an agreement.

Even if there is no NHL season this year and the guys finish the season here in the KHL, they will have to go back to their clubs next season. And I’m afraid that most of the stars who are causing such a fuss now won’t be playing in the Sochi Olympic tournament.

RBTH: You seem so sure that the NHL won’t let its players go to the Olympics, but the League won’t comment on this. Do you have inside information from top officials?

V.F.: I know some details of the talks between the NHL and the players. Believe me, international tournaments is the last thing they are talking about, well, maybe the second-to-last thing.

RBTH: But surely the Olympics should be one of the most important points on the agenda…

V.F.: You have to understand the psychology of business. For Bettman, just like any other NHL club owner, the Stanley Cup is a dream. But it also means money.

The Olympics are organized by the International Olympic Committee, which never shares its profits. This is their event, and something tells me that Bettman couldn’t care less about the players who want to play for their national team. I think most of the other club owners will agree with him.

RBTH: But in Vancouver, both the Canadians and Americans were happy about the Olympic tournament. It was hugely popular. That was a good example, and the NHL won’t miss much if it lets its players go for two or three weeks.

V.F.: They played in Vancouver, at the local NHL club’s arena. There were Vancouver Canucks fans in the stands, together with other NHL fans. That was a different thing.

There were no long flights, no jetlag, and the standard of play was just as high as in the NHL, if not better. When it comes to Sochi, you need to factor in the distance and the time lag.

RBTHL Some Russian players have already said they would go to the Olympics, whether their bosses allow them or not.

V.F.: Any Russian fan would applaud these words. But there are certain laws by which the hockey world must abide. First, there are contracts. Then there is the collective bargaining agreement between the players and the NHL – the one we have been talking about.

There are also agreements between the International Ice Hockey Federation (IIHF) and the National Hockey League. I don’t know for sure what sort of terms and conditions they have got there, but as far as I understand, unless there is a lockout, you can’t play in any other place once you have signed a contract. Otherwise a conflict will occur.

RBTH: Who is there to negotiate this problem? The IIHF led by René Fasel?

V.F.: I don’t really think that Fasel has any influence under the circumstances. He has nothing to offer. Ice hockey is already very popular in the U.S. The Olympics can’t make it any more popular, while the IOC won’t ever share its profits.

Back in 1996, Igor Larionov and I were involved in the decision-making process regarding professional players competing in the Olympics. We were the chief spokesmen – we talked about our experience and how important it was for players to represent their country.

RBTH: Did you convince them then?

V.F.: I have no idea. Many European players were moving to the NHL at the time, and our reasons must have been good enough. There were no major money disputes then. But four Olympic tournaments later, and the NHL now understands what it has gained and what it has lost.

It’s hard for us to say: “it’s cool – people are watching,” because the response will be: “having taken everything into account, we have come to the conclusion that it may be cool for some people, but for us it certainly is not.”

RBTH: So we are at an impasse? What should we do?

V.F.: We would love to see the best players at the Olympics, but believe me, it doesn’t depend on us. It depends on the people in the NHL who are using their last chance to reach an agreement. How can we influence Bettman?

He always knew that the best players would come to him, that he would be doing everything that he thinks necessary. The next agreement may be signed for eight years.

The worst-case scenario is that NHL players could be banned from playing in the World Championships, even if their NHL club hasn’t made it into the playoffs. There are many ways to make them stay. We had a chance to influence the decision-making process, but we have to really want it and understand how things work.

RBTH: You have cited the example of the NHL system many times. Do you think some of its elements, like the draft, should be used in Russia? If it is so perfect, why do they have lockouts?

V.F.: The NHL needs to break away from many things that have been there for historical reasons. But we had a chance to make it work from the very start. If we learn from the mistakes of the NHL, we can make it work for us. What is wrong with the NHL?

The lockout is “strictly business”. They will sign a new eight-year deal and everything will be fine again. No one will leave, the guys won’t forget how to play hockey during this season. They understand that they have to play well to get big money.

The recent events in the NHL don’t affect the quality of the game. It is the other way round: they give an impetus to players to do their best at every practice and in every game to prove that they are worth their salaries.