India and the SCO: Can they tango? 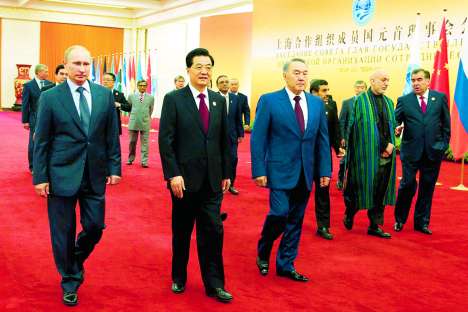 India and the SCO: Can they tango? Source: Photoshot/Vostock-photo

For India, its best chance for a full membership is now since Russia is set to take over as the next chair of the SCO.

Although India has been engaging with the Shanghai Cooperation Organization (SCO) ever since 2005, it is yet to be accepted as a full member. At the SCO Prime Ministerial Meeting in Bishkek, the capital city of Kyrgyzstan, in December, the Secretary (East) in India’s Ministry of External Affairs (MEA) who represented India at the meeting, made it clear that “India stands ready to play a larger, wider and more active role in the SCO as a full member as and when the members of the SCO decide to take forward the expansion process”, thereby laying to rest any doubts as to India’s intentions regarding joining the SCO as a full member.

India is presently an observer in the SCO along with countries like Pakistan, Iran, Mongolia and Afghanistan. In the light of India’s renewed push for full membership in the SCO, it will be worthwhile to lay down how both India and the SCO stand to gain from India’s bid.

What does India stand to gain?

Firstly,India, like Russia and other SCO member countries share common interests in the stability of Afghanistan, especially after the withdrawal of the Western troops by 2014.  India is one of the biggest international donors in Afghanistan, having already committed nearly $2 billion in aid. Once the Western troops exit Afghanistan by 2014, there will be a power vacuum in the country, which China will try its best to fill, both by itself and through the SCO mechanism. Hence it is important for India not to give China a free run in post-2014 Afghanistan.

Secondly, the fight against terrorism is another important area of cooperation between India and the SCO member countries because these countries, like India, are also at risk from terrorist attacks. India has indicated its willingness to increasing its engagement with the RATS (The Regional Anti Terrorism Structure) which is based in Tashkent and is a permanent organ of the SCO, in the light of its own experience of being at the receiving end of some major terrorist attacks.

Thirdly, the Central Asian countries are very important for supplying India with stable energy supplies at a time when its energy demand is increasing. The much-touted Iran-Pakistan-India (IPI) gas pipeline does not seem to be going anywhere due to ostensible pressure from the United States.  On the other hand, the TAPI (Turkmenistan-Afghanistan-Pakistan-India) pipeline is set to bring natural gas from Turkmenistan to India via Afghanistan and Pakistan.  Kazakhstan is already a major source of energy for India. There is an agreement in place between India’s state-owned Oil and Natural Gas Corporation(ONGC) Videsh Limited and KazMunaiGaz for the Satpayev oil block in Kazakhstan while a Memorandum of Understanding(MoU) exists between India’s state-owned NPCIL(Nuclear Power Corporation of India Limited) and Kazatomprom for the supply of uranium to India. During the visit of the Indian Prime Minister Manmohan Singh to Kazakhstan in April 2011 an agreement was signed between the ONGC Videsh Limited and Kazmunaygaz for the purchase of a 25 percent stake in the Satpayev Oil Block in the Caspian Sea.

Fourthly,Pakistan is lobbying hard for full membership of the SCO and is most likely to be inducted as a full member with the tacit backing of Beijing. Hence it is important for India to be in the SCO since otherwise Pakistan is likely to use the forum as a smokescreen to cover up its support for anti-India activities from its own soil.

Fifthly,membership of the SCO also gels well with India’s “Connect Central Asia” policy, which aims to increase its political, economic and people-to-people links with the Central Asian nations. India has always had close historical and civilisation ties with the SCO member countries. The bilateral ties between India and the SCO member countries have been very strong, with the exception of China, with which India has a long-running boundary dispute. It may be mentioned here that during the visit of the Tajik President Emomali Rahmon to India earlier in September this year, the relationship was upgraded to the level of a “strategic partnership”.

What does the SCO stand to gain?

Firstly, the SCO stands to gain from India’s rich experience, especially in sectors like IT. Besides, it can also gain from India’s experience in areas like finance and banking. The Secretary (East) in India’s Ministry of External Affairs outlined at the Bishkek summit that “we would also like to share our experience in specific areas of economic endeavour such as banking, capital markets and micro-finance.”

Secondly, India had cooperated with countries like Russia, Iran and Tajikistan in backing the Northern Alliance in Afghanistan and after the withdrawal of the Western forces by 2014, such an arrangement may need to be resuscitated in the light of the Taliban regaining strength in most parts of Afghanistan.

Thirdly, the presence of India as a full member in the SCO will ensure that China does not become the dominant force in the grouping.  Chinese backing for Pakistan has also not gone down too well with some of the SCO member countries since Pakistan has provided sanctuary to almost all the terror groups and separatists active in the SCO member countries, including in the restive Xinjiang province of China.

However, the fact that India was not represented by somebody from the ministerial level would certainly be taken note of by the SCO member countries when they analyze India’s bid for a full membership. While not discounting the fact that there were domestic compulsions (the debate on Foreign Direct Investment in the Retail Sector was raging in the Indian Parliament), India needs to add more punch to its bid for full membership of the SCO.  This region is crucial if India is to continue on its growth trajectory since it is rich in energy resources.  Although the Middle-East has traditionally been the major source of India’s energy imports, this is likely to see a change in the near future as the region has got embroiled in a series of crises ever since the onset of the so-called “ Arab Spring”.

In case even limited hostilities break out over Iran’s alleged nuclear programme, the Indian economy will take a hard hit. For India, its best chance for a full membership is now since Russia is set to take over as the next chair of the SCO. Besides, peace and tranquillity in the region is crucial to ensure India’s security. Hence, full membership of the Shanghai Cooperation Organisation is a bus India cannot afford to miss.