Is it possible to live on Mars?

The Voice of Russia
Boris Pavlishev 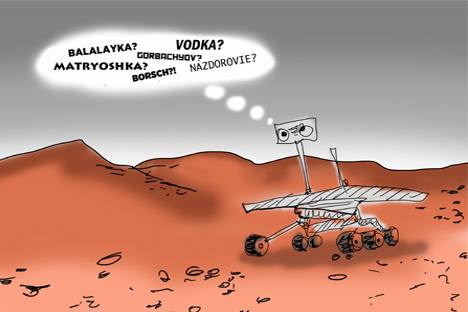 Scientists say the influence of radiation during a stay on Mars is comparable to that during an orbital flight.

Perhaps, people could live on Mars. The radiation levels on the planet are as low as in the lower earth orbit where the International Space Station flies. Scientists have arrived at this conclusion after receiving radiation measurement results from the red planet. Nevertheless, experts are not in a hurry to review their approaches towards the protection of people when making preparations for future expeditions to the Mars.

Radiation remains to be the major obstacle in carrying out manned flights to Mars. This has been technically expedient since the early 1970s. However, scientists have not developed light materials to protect people from radiation yet, while it’s impossible to take heavy thick lead plates into space. It has been estimated that during the three-year flight one of every four crew members might receive a dose of radiation enough to trigger a fatal cancer disease. These three years include the waiting time for favourable conditions to start the return journey. If radiation has no effect on the crew during this period of time, there is a need to make new assessments, says biologist at Moscow State University, Elena Vorobeova.

“Any new information will change our apprehension, and as a result, we will review our approaches towards assuring safety for cosmonauts. However, I believe that overall, this will not affect our general understanding of how to protect cosmonauts on Mars,” Elena Vorobeova said.

During the flight, there is nowhere to hide from dangerous cosmic radiation. Moreover, there is no magnetic field around the planet like on Earth that protects living beings from solar flares. Here is an opinion from head of the department at the Institute of Medical and Biological Problems Vladislav Petrov.

“I see no reason to review any principles or approaches. The atmosphere on Mars is a sufficient protection from various kinds of comic radiation. However, during strong solar flares, the dose of radiation could be large, and this may cause problems. These problems are quite different from those when we fly around the Earth. One of them is the deterioration of working efficiency under the influence of radiation. We are aware of this even when driving a car. We hope that such a thing never happens during a flight to Mars,” Vladislav Petrov said.

The influence of radiation during a stay on Mars is comparable to that during an orbital flight. In fact, a stay on board the ISS for months is also not so safe because cosmonauts are affected by heavy cosmic particles that cause various kinds of defects in the eyes. There have been incidents of growing cataract, says Vladislav Petrov.

The issue should be thoroughly studied not only on the basis of what has been observed in cosmonauts but also on the basis of special experiments. Russia is planning to conduct these experiments on board the BION satellite,” Vladislav Petrov added.

Concerning the chances for discovering life on Mars, the new information sent by Curiosity Mars rover will have no effect on it since radiation is not the most harmful thing for a living cell.

Sometimes bacteria live in the closest proximity to nuclear reactors where radiation is extremely high. Scientists assess the living condition on Mars as not very extreme. Vladislav Petrov believes that new information will lead to the review of the evolution of the biosphere on the planet.

However, the search for the constituency of the biosphere on Mars has not ended successfully. If there is no evidence of life on Mars there is no need to review any hypothesis of its development. Still, there is no clear answer to the main question. Scientists cannot answer why Mars has entirely lost its atmosphere and water, and its warm and wet climate has been replaced by cold and dry weather.