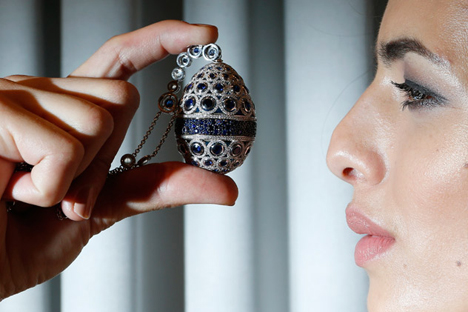 While the tsar was Faberge’s most important customer, the workshop made items for other wealthy clients. Source:Reuters/Vostock-Photo

Estet, Faberge and Tulupov are the most well-known jewellery brands in Russia and each brand has a unique history.

Estet celebrated its 20th anniversary in 2011. It was founded in 1991 by Gagik Gevorkyan, now the president of the company, originating in a small family workshop, the firm’s website said.

Estet’s products are available in stores throughout Russia and the CIS, including all large Russian cities and regional and local centres. In addition, it has developed international relationships to bring its products onto the world market, as well as serve as the Russian conduit for major world firms.

In 2009, it became the distributor for brands such as Ed Hardy and Bijou Tresor, and in 2010 developed two new business lines in collaboration with foreign companies: the ZhemEst brand, with Canadian Gem; and the company ProTime Rus, with Switzerland’s ProTime, to distribute medium- and high-priced Swiss watch brands.

The growth of the company was reflected by its move in 2009 into its own building, which houses facilities for production, presentation, sales and management. In its production and promotion, it has adopted up-todate technology, including laser and 3D design and the use of the Internet videoblogs. Estet’s latest collection is based on the Greek myth of Theseus and the Minotaur, and is dedicated to Ariadne, the Cretan princess who helped Theseus defeat the monster.

Russia’s jewellery industry extends far beyond the two capitals. Based in Yekaterinburg, the company Dragotsennoye Koltso Urala (Precious Ring of the Urals), owner of the Tulupov brand, was founded in 2007.

The company specialises in the use of large precious and semiprecious stones, which it obtains from Russian sources, it said in an e-mailed statement.

Its business is focused on Russia, with sales rooms in Moscow and Sochi, as well as its studio in Yekaterinburg and partnerships with retail outlets in eight other cities around the country.

Tulupov’s themed collections include “The Proof of Love” – capitalizing on what its website describes as the inspiration behind its work – and “Russian Seasons in Paris,” 22 sets of pieces based on Russian experiences of the French capital, focusing on art and ballet.

The firm frequently displays its individual work and its collections around Russia, most recently earlier in December at the Russia’s Best Jewellery exhibitions in Moscow and St. Petersburg. Its set Luchisty (“Radiant”) won second place in the Benefit of Stone competition at the Junwex 2012 exhibition in Moscow in September, and the Tumanny Vecher (“Foggy Evening”) collection and Taina (“Secret”) ring took first place at the Junwex New Russian Style exhibition this spring.

While the tsar was Faberge’s most important customer, the workshop made items for other wealthy clients. Perhaps the most famous jewellery house in the world, the Faberge legacy stretches back to 1870, when Peter Carl Faberge inherited his father’s workshop in St. Petersburg. In 1885, Tsar Alexander III ordered the first of what came to be annual Easter eggs for the imperial family, though eggs were made for other wealthy and aristocratic clients, as well.

The eggs have become renowned for their extravagance and the secrets hidden inside, such as – within the egg commemorating the 300th anniversary of the Romanov dynasty – a globe illustrating the size of the Russian empire under Mikhail at his accession in 1613, and its size under Nicholas II in 1913. The outside is decorated with the portraits of the Romanovs, and the egg currently is kept at the Kremlin Armoury Museum.

Faberge was forced to flee Russia in 1917 and died in France in 1920. The company’s website reports that the family lost the legal rights to the name in 1951, but the brand and the family were reunited in 2007. The re-launch came on Sept. 9, 2009, and the firm is continuing the fusion of contemporary features and tradition pioneered by its progenitor.

Modern collections include Russian Seasons, inspired by the pre-revolutionary world of Peter Carl Faberge, and Les Fabuleuses, embodying themes from Russian folk and fairy tales, the world of 20th-century Russian ballet, and the floral design tradition of the house.