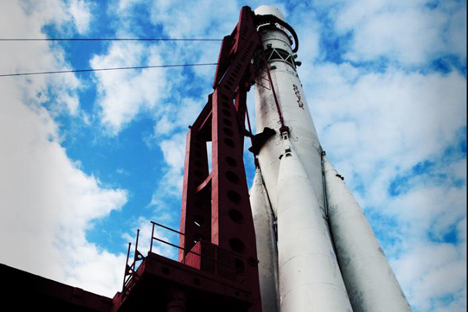 For now, there is only one long-term International Space Station orbiting the Earth. It could have neighbors sometime soon, though.

Russia’s largest rocket and space corporation, Energiya, has signed a 350-million-ruble contract (around $11.4 million) with Roscosmos to develop a draft design for an orbiting sky lab code-named OKA-T-MKS.

The project is proposed as a multipurpose satellite laboratory, engineered to orbit the Earth autonomously and dock with the International Space Station (ISS) from time to time. Its crew will service research equipment, handle fueling, and perform other tasks as needed.

The sky lab will carry 850 kilograms (roughly 1,870 pounds) of research equipment, both inside and on its surface. It will serve as a base for fundamental and applied research in space materials, plasma physics, biology, and medicine.

The lab will feature a pressurized module with an airlock and a docking compartment, which cosmonauts will be able to enter to service research equipment. The OKA will be able to orbit on its own for 90-180 days between dockings at the ISS.

The International Space Station – or at least its Russian segment – will continue to expand, too. The Russian ISS segment now includes five modules: The Zvezda service module, the Zarya functional cargo block (which is officially American, because it was paid for with American money), the Pirs docking compartment, the Poisk mini-research module, and the Rassvet mini-research module.

According to an official announcement by the Khrunichev Center, its specialist staff completed the assembly of the Nauka multipurpose laboratory module (MLM) in mid-December and sent it to RKK Energiya for further testing. A Proton rocket carrier could put this module into orbit in March 2014. The module’s weight at launch will be 20.3 tons, and it will carry up to three tons of research equipment.

The Nauka module is expected to dock with Zvezda’s docking compartment and will carry and operate research equipment and the European Robotic Arm (ERA), store cargo, perform certain life-support functions, navigate the ISS using engines mounted on its pressurized mating adapter, lend its docking compartment to cargo ships and research modules, and transmit fuel from the Progress cargo ship to the Zvezda service module.

A special airlock installed at MLM and ERA side ports can be used to haul equipment and materials from the station’s pressurized compartment onto its surface, without the need for spacewalking. The Nauka module will also be fitted with toilet facilities and three workstations for cosmonauts.

Besides the new research modules for the ISS, Roscosmos has announced a tender to develop a scientific and energy module (NEM-1). According to the technical brief, the module’s service life should be at least 17 years: two years in storage and preparation for launch, and 15 years in operation as part of the Russian segment of the ISS.

The module’s solar arrays should generate at least 18 kilowatts of electricity a year, on average, at the start of its operation. The NEM-1 module will host universal racks for medical equipment, exercise equipment, and means of prevention of adverse space-flight factors, as well as other devices and apparatuses.

Alongside this, Russia may also build an orbital station of its own. According to a statement by Roscosmos head Vladimir Popovkin at the Farnborough International Airshow 2012, Russia is developing several new ISS modules to be used as building blocks for a new generation of manned stations. “If we don’t find further areas for international cooperation, those modules could be used separately as a Russian station,” said Popovkin.

The Roscosmos head added that the countries cooperating on the ISS, based on Russia’s recommendation, have set up a task force that will decide the fate of the station and determine the timing for its decommissioning. Based on preliminary negotiations, the ISS program partner countries intend to extend its operation to 2020. After that, the station could be de-orbited and sea-ditched.

“Open-ended discussions are ongoing,” Popovkin said. “Ideas include the creation of smaller stations to perform specific tasks on the Earth’s orbit, and an international station to be located in the equilibrium points between the moon and the Earth, or behind the dark side of the moon.”