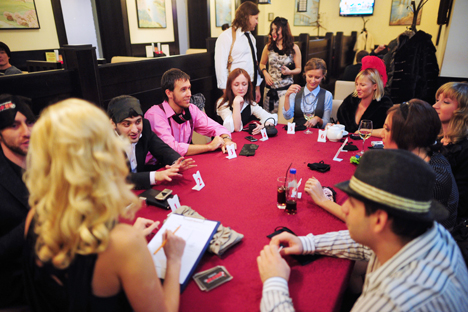 What can you do on a Friday evening in Moscow if you have had enough of clubs and bars? One option is Mafia – an intellectual card-based game created by a psychology student 26 years ago. Russia’s capital is now home to a chain of special clubs, and, in this context, the popular game is proving to be a versatile and profitable business.

Mafia’s predecessors are The Werewolves of Millers Hollow and Cluedo – games that have been famous in Europe since the 1950s. The modern, team-based reincarnation of the game was thought up in 1986 by psychology student Dmitry Davydov.

Mafia first became popular in universities in the Soviet Union; foreign students later took it with them back to their home countries, and the game found fame all over the world. Since its invention, many variations of the original game have appeared.

The most popular version of Mafia is as follows: The leader of the game deals out the cards to the 8-16 other players. Two or three of them are given the role of mafia members, one is told to be a policeman, and the rest are civilians. The leader announces that night has fallen and the city is falling asleep.

The mafia wake up, they make each other’s acquaintance and then “murder” one of the civilians. At night, the policeman and the leader decide which player is in with the mafia. “Morning” comes, the players wake up and discuss who could be the murderer, and, after a vote, the player with the most unconvincing story is put in jail.

Days and nights continue until the mafia members are in the majority, or, until all the bad guys are in jail. Each game lasts about half an hour.

Most people see the game as a nice way of spending an evening with friends. Now, however, businessmen have latched on to the idea that there is money to be made out of this game. Indeed, there are many ways of doing this: there are corporate, children’s and club games, and Mafia is also used in office team-building and psychological training.

Clinical psychologist Lika Mikeladze thinks the game can be used by HR specialists to test how people react in a business environment; it can also be employed to put a potential life partner through his or her paces. According to Mikeladze, big companies often organize games of Mafia in an informal environment, when all players are relaxed and playing the game purely for fun.

“But if you look closely, you can find out a lot of interesting things about them: you can pick up on non-verbal signals that people give out when negotiating business deals; i.e. you can then tell when they are lying or not, what they try to hide and how they do it,” says Mikeladze.

On average, this half-hour character analysis will set each person back $32.50, and the game generally involves 10 players. So, the game’s potential as a business venture is clear…

HR specialists also find out a lot about a potential employee by how they behave during the game – do they have leadership qualities and the ability to find their way out of difficult situations?

Mafia is also an excellent way to train politicians, who can use the game to work on their oral presentation skills: employing the right tone of voice, use of gesture and intonation to persuade and convince.

Mikeladze believes some variations of the game can help children with academic problems, as well as those who find it hard to study or interact with other kids.

“Psychologists often deal with children with poor concentration, and Mafia can sort out this problem, too. During the game, the child learns how to concentrate on certain aims: to win, you must either not give yourself away or figure out who the mafia are. While they are playing this game, children focus, forget their slightly chaotic and destructive state of mind, and learn how to interact with other people,” says the psychologist.

Further on the subject of learning: when played in English, mafia is an excellent way of mastering the language, especially when played with native English speakers or American expats.

Foreigners who come to work in Russia often find it hard to integrate into the Russian community, and, for them, Mafia is a fun way of meeting 50-60 people in one night of playing.

Organizers of these sorts of training sessions and corporate evenings are not hard to come by. One of the best-known companies in this market is Mafliga. Its founder, Kamil Megomedov, sees Mafia as an excellent way of getting to know people from the same social group.

There are different categories of Mafia clubs: classic, gold and platinum; and the costs for playing vary according to how elite the venue is. For example, there are closed, elite clubs, but there are also places where you can play Mafia for free, or, where an evening’s play will cost $17.

As Magomedov notes, Mafia is an elite leisure activity – not in terms of cost, but in terms of the people who like to play it. As a rule, Mafia attracts people above the age of 25 who are tired of endless wild nights out and are looking for intellectual stimulation.

A person can turn up to a game of Mafia by himself and get to know dozens of other players – all of whom are potential friends or partners. A lot of strange situations are played out around the mafia table:

“Once a member of the State Duma ended up playing with a talented student. After voting, the student shouted at the Duma deputy: ‘You call that voting! This isn’t your Duma; here you have to actually use your brain before putting your hand on the table!’ At first, everyone was taken aback; then, one by one, they started to laugh, and the deputy promised to mend his ways.”

According to Magomedov the business is still developing and is yet to bring in substantial dividends. At the moment, the takings from the game generally go toward paying the leaders – the administrators and psychologists. A slightly different format – mass games and tournaments – would be more financially viable.

A similar game (Twee Game or Tuning Hall) attracted about a thousand people, without any kind of advertising other than social networks. Games like these are popular with sponsors and advertisers and have the scope to be very profitable from this point of view.

In Russia and neighboring countries, Mafia is moving up a notch – the Russian Federation of Intellectual Games (FIIM) has ambitious plans lined up for Mafia and wants to make it an official sport. The chairman of the FIIM, Ilya Rogachev, thinks that Mafia will make it to the Russian national level within the next couple of years.

From there, it would not be long before Mafia is recognized as a sport in its own right.  The FIIM also organizes tournaments and is developing an official set of rules and standards. According to FIIM’s chairman, it is also enlightening the public.

“Our mission is simple – education. Mafia is a game that enables personal growth, and it creates a great environment for interacting with other people. We are making unique knowledge available for all the public,” says Rogachev. “It’s possible that we are still yet to discover the whole potential of this business and importance of its social function. The potential, as we see it, is huge.”