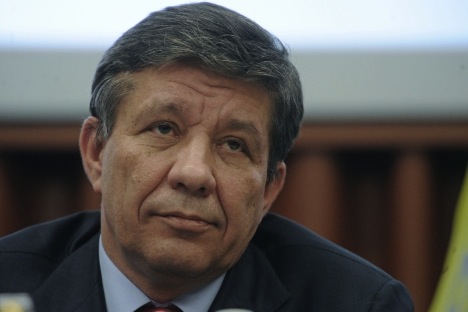 The head of Russia’s Federal Space Agency (Roscosmos), Vladimir Popovkin, talks to Izvestia about new rockets, construction of a cosmodrome and plans for international cooperation on space research.

Izvestia: Mr. Popovkin, how was this year for the rocket and space industry?

Vladimir Popovkin: The launch campaign for this year ended on Dec. 19. We performed 28 launches, putting 35 spacecraft into orbit. Unfortunately, due to a malfunction in the Briz-M upper stage, the Express MD2 and the Telkom-3 failed to reach their target orbits, as did a Yamal-402.

Izvestia: And what about the industry as a whole?

V.P.: Preliminary data show a 14.9 percent yearly increase in output in the rocket and space industry in 2012. The State Armament Program and an increase in funding through the Federal Space Program largely drove the growth.

One of our most important achievements this year is the commencement of full-scale construction of the Vostochny Cosmodrome in the Amur Region: the foundations have been laid and work is underway to create a supporting infrastructure, such as power supply systems, roads and railways.

Izvestia: Will it be possible to conduct tests of the Angara rocket this summer, as planned?

V.P.: We are a little behind schedule on this one, but both builders and manufacturers of surface equipment are working flat out to catch up by March of next year. March is a point of reference for us; that is when we intend to start trials with a test weight and a fuelling mockup.

We are confident that we will be able to conduct flight tests of the Angara next year, but a specific timeline will only become clear in March.

Izvestia: Are the rockets themselves ready?

Izvestia: How likely is it that space tourism to the ISS (International Space Station) will be resumed? Media have reported that the singer Sarah Brightman was getting ready for a flight...

V.P.: We have no problem whatsoever with people getting themselves ready to fly to the ISS, but we haven’t signed any contracts yet.

Under an agreement between Roscosmos and NASA, a super-extended expedition of two crewmembers to the ISS is scheduled for 2015, whereby each crewmember will spend a year at the station. At the same time, the maximum guaranteed length of stay of the Soyuz spacecraft in orbit is half a year.

This means that a ship docked to the ISS will need to be replaced during the super-extended expedition.

The question is how do we do that? We could put two tourists onboard and bring them back after 10 days. Or we could send an expedition. Sending a trained Russian cosmonaut to visit there for 10 days essentially as a tourist at the government’s expense would not be the best idea, though.

Plus, our European colleagues have told us that they would like to buy a vacant seat for their own astronaut. We are weighing all pros and contras right now, and we expect to make a decision in the first quarter of next year.

Izvestia: What is the status of the ExoMars project contract with the European Space Agency?

V.P.: There is an agreement, in principle, to work on this. The contract will be signed. We have started funding for this project.

Izvestia: Does Russia have to contribute anything else to this project besides the rocket carrier?

V.P.: Our participation is not limited to the rocket. We have been able to agree on the following cooperation arrangements: in 2016, the Proton will launch a European orbiter to Mars that will carry several Russian research devices and our experimental landing module.

Then, in 2018, we will send a Mars rover carrying a wide array of European and Russian research equipment, which for the first time in history will allow us to take Mars soil samples from several meters deep. The scientific data will be relayed via the 2016 mission’s orbiting module.

Dec. 21, and we agreed to sign the contract in the first quarter of next year. We are in complete agreement, and the delay is due to the ESA’s complicated official procedures. We have agreed to finalize the contract to the last letter by January 20.

Izvestia: Are you planning to cooperate with the ESA on any other projects? Are you thinking about a second attempt at the Fobos-Grunt project, for example?

V.P.: We have a cooperation agreement with the ESA on the Mars project. We are working together with them on the Moon, joint Sun research projects, and the research of Ganymede, a satellite of Jupiter.

Task forces have been set up in all of those areas with a mission to prepare relevant agreements. In general, any future major space projects are impossible without international integration.