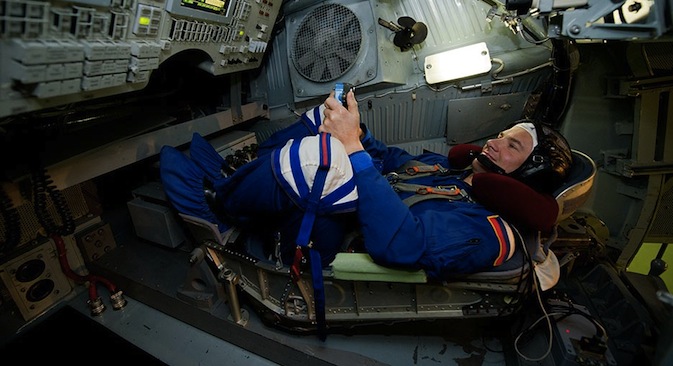 Russian cosmonaut Yuriy Romanenko sits in the cabin of a centrifuge used for training at the Star City space center outside Moscow. Source: Reuters / Vostock-Photo

Russian cosmonauts are five times poorer than their Western counterparts and even Russian civil aviation pilots.

The Russian government recently approved salaries for the country’s cosmonauts. Depending on their position and "status," they can expect to receive between 61,000 - 88,000 rubles ($2,000-2,900) per month, plus a few perks. Not only do their American counterparts earn more, but so do even Russian civil aviation pilots.

The government has approved position-dependent pay packages for Russia’s cosmonauts, as well as bonuses for tenure and qualifications. A corresponding resolution was drawn up by the Cabinet of Ministers and added to the corpus of federal regulatory and administrative acts.

In accordance with the new amendments to the regulation on cosmonauts’ remuneration (approved May 17, 1993), the basic salary is 60,900 rubles for short-listed candidates, 63,800 rubles for trained cosmonauts, and 88,450 rubles for cosmonaut instructors. After a cosmonaut’s first trip into space, the salary rises to 69,600 rubles.

Alexei Krasnov, head of the manned spaceflight program at Roscosmos, says that, in Soviet times, cosmonauts were financially much better off than ordinary citizens. They received an apartment, a Volga car, and other goodies from the state. Everything was provided for the country’s space heroes, right down to bed linen, suits, coats, and even socks.

Today, Russian cosmonauts find themselves less catered to than, say, Russian airline pilots for commercial international routes. They are also an order of magnitude worse off than their foreign counterparts.

Russian cosmonauts only receive $130,000-150,000 if they spend six months on the International Space Station (ISS), said Vladimir Solovyov, head of the Russian segment of the ISS mission.

While in those days the income of an American astronaut was 2.8 times more than the salary of a Soviet cosmonaut, today that gap has almost doubled.

Alexei Leonov, a pilot, cosmonaut and Hero of the Soviet Union, said this on the matter: "Russian cosmonauts cannot boast of a big salary; and some of them, even those awarded the title ‘Hero of Russia,’ live with their families and children for many years in one-room apartments or factory hostels."

In the opinion of Sergei Krikalev, head of the Yuri Gagarin Cosmonaut Training Center, Russian cosmonauts should receive a decent wage – above both the national and the industry average. However, money should not be the primary motivator for those seeking to enter the profession.

"Cosmonauts’ remuneration should be pegged to the actual work they perform, as well as to the degree of risk involved. There should be no illusion that cosmonauts can just rest on their laurels and enjoy privileges. I know some examples of that," Krikalev said in an interview with RIA Novosti.

Worth the same as a train driver

Vyacheslav Rodin, deputy director of the Space Research Institute of Russia, advises against comparing the salaries of Russian space explorers with their foreign counterparts.

"The salaries of Russian cosmonauts are not overly high – nothing exorbitant, of course. They don’t sit in meetings stroking a lap-dog, or anything like that; but neither can you describe them as poor," he told Vzglyad.

"Our cosmonauts do OK. They are decent, humble guys. I certainly wouldn’t compare their salaries to those of astronauts from other countries," said Rodin.

Still, Yuri Karash, a member of the Russian Tsiolkovsky Academy of Cosmonautics, believes that the cosmonaut profession in Russia has been debased to the level of pilot, at best: "These days, pilots earn more than astronauts. The captain of an A320 liner can get $11,000-12,000, or up to 400,000 rubles per month, while a cosmonaut receives no more than 88,000 rubles."

"I recently spoke with a good cosmonaut who is preparing to fly into space. He will receive $90,000 for the trip. Sounds a lot, you might say – but that won’t buy even a one-room apartment in Moscow. More significantly, he’s spent 12 years getting ready to fly, during which time his salary has been no more than 60,000 rubles a month," said Karash, concluding that Russian pilots are financially better off than cosmonauts.