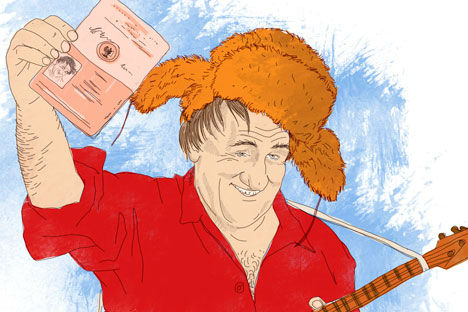 While most Russians will be glad to have a world famous actor as their compatriot, the minority have questions about Gerard Depardieu's integrity.

The actor who has chalked up scores of magnificent performances, including Cyrano de Bergerac, Danton and Napoleon, decided to surrender his French nationality after the government of President Francois Hollande introduced a 75 percent income tax on those earning over 1 million Euros per annum.

He has promised to learn Russian and settle a few dozen kilometers from Moscow, in the countryside.

But Russians are, perhaps surprisingly, split over Depardieu’s decision. While the majority will no doubt be glad to have a world famous actor as their compatriot, the minority have questions about Depardieu's integrity.

Personally I do not see anything wrong with someone not wanting to pay 75 percent tax on one's earnings. It is an exorbitant and patently unfair rate.

The question lies, rather, on a purely moral plain.

Depardieu is notorious for being willing to pay obsequies to the likes of Uzbek dictator Islam Karimov (or, rather, his daughter Gulnara), Azeri strongman Ilham Aliev and Chechnya's Ramzan Kadyrov. A YouTube video shows him shouting in broken Russian “Glory to Ramzan!” last autumn at a public celebration of the Chechen leader's birthday in the Chechen capital Grozny.

It is assumed that Depardieu takes home a handsome fee for these appearances. He is by no means alone in this; however others, such as Hilary Swank, have later expressed regret and donated their honorariums to charities.

Not so with Depardieu who seems not only to delight in pocketing the money (if, indeed, he does), but also in offending public opinion. His thank you letter to Vladimir Putin praises Russia for its “great democracy.”

This has made many Russian intellectuals complain about the French actor's lack of moral scruples. The debate is characteristic for contemporary Russia, where in the past year issues of public personalities’ moral standing and reputation became particularly acute.

Only recently satirical writer Mikhail Zhvanetsky and economist and former minister Yevgeny Yasin (both members of the metropolitan liberal elite which generally opposes the Kremlin) came under fire from sections of the public for accepting awards from Putin.

This is a problem that will not just go away. The Kremlin made a clear choice in favor of the polarisation of public opinion, particularly in portraying anyone who opposes Putin's policies as “anti-Russian.”

Given these circumstances, it will be increasingly difficult for many to maintain the good-hearted “clubby” atmosphere between metropolitan intellectuals without referring to one's public stance. Just six or seven months ago it was still possible to ignore these ideological differences.

But the string of Kremlin-sponsored laws limiting civil liberties, and the recent “anti-Magnitsky law,” banning the US citizens from adopting Russian children, have faced a lot of people with stark moral and political choices.

These choices now have consequences: including damage to personal relations on both sides of the political divide. Gerard Depardieu, if he decides to reside in Russia, may well find out soon what this means.