There will be darkness: Polar nights in Murmansk 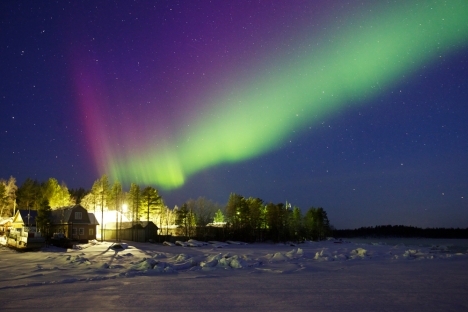 Russian brings together about 30 cities within the Arctic Circle where tourists can witness polar nights. Source: Alexander Semyonov

RBTH’s correspondents reveal how the Arctic Circle’s most populous city survives when the sun goes down for months at a time.

In Russia there are around 30 cities within the Arctic Circle. Murmansk, the Arctic Circle’s most populous settlement, was the last city to be established in the Russian Empire. The city only celebrated its 100th anniversary in 2016, and it is now home to 307,000 people.

“We were in Murmansk for three days and three nights” say soldiers that have just finished three years’ service in Zapolyarie. Here, the year is divided into polar night and polar day. Polar day is when the sun never disappears behind the horizon and merely circles around the sky for days on end. A polar night is something much more depressing: in Murmansk there is no sunlight at all from Jan. 3 through Jan. 11, when the lightest time of the day is twilight.

In general, the weather in Murmansk is unpredictable, not adhering to a strict seasonal pattern like in other Russian cities. This is due to the Gulf Stream and the nearby Arctic. In December it is not unusual to hear rain hammering on the rooftops, with thermometers showing temperatures above zero. It is not unheard of for snow to fall in June or even in July. As a result, it is hard to know what to wear in this region: in May, girls can be seen in boots and fur coats, strolling hand-in-hand with guys in shorts and sandals. In Murmansk, the day often starts as winter, but spring has sprung by the afternoon.

In summer 1942, Murmansk was almost completely destroyed: the ceaseless polar sunshine was to blame for this. Nazi bombs set fire to three quarters of the city, which was almost entirely made of wood. In just one year Murmansk was subjected to 792 air strikes and 185,000 bombs – the only city to fare worse against the German air raids was Stalingrad.

“Destroyed by bombs, scorched buildings… You need to be Russian to stay here. If it eventually comes, this peace, then it should come to the people of Murmansk first of all. They have earned it,” American journalist Dave Marlow wrote in Harpers Magazine in 1942.

The capital of Zapolyarie Region was honored twice: once in 1982 with the First Order of the Great Patriotic War; three years later, in 1985, it was given the title of Gorod-Geroi (City of Heroes).

“No one likes the polar nights: when it’s dark you just want to sleep all the time. But then, during the polar days, by the time you want to go to sleep the new day has begun. And, actually, you get used to it. Humans can get used to anything…” says Tatiana, director of School No. 7 in the village of Korzunovo in Murmansk Oblast.

On Jan. 11, the long polar night comes to an end, and on the last Sunday of the month the city celebrates the Sun Festival: concerts on the city’s squares, open-air folk festivals, and, of course, plenty of pancakes.

Murmansk is Russia’s gate to the Arctic Ocean, a city of sailors and fishermen. However, when the biggest port was first being built, fishermen were in short supply. The deficit was easily mended: in the 1920s, anyone who had had a good Friday night out could easily find himself on board a trawler, heading out to open sea by sunrise; the first mate and three sailors would do the rounds of the local drinking establishments with wheel barrows, hauling all the passed-out butchers, bakers and candlestick makers off to the ship. The newly caught fishermen were briskly given the hair of the dog and told to get down to work.

The main source for workers in this profession was actually Shanghai – one of Murmansk’s districts with a large Chinese community. Strange as it may sound, the Chinese were the first people to settle in Murmansk. They traded a home-brewed drink known as “hanzha” and organized card games, which, combined with the brutal maritime morals and the exuberance of the Russian soul, turned the young city into the Arctic’s answer to Cape Town.

Murmansk was born in harsh conditions – born, in essence, because of the war and for the war. During World War I, Russia was in desperate need of supplies from the Allies: the only solution was to build a port in the Kola Inlet and a railway from here to St. Petersburg.

The railway was built in just a year, with the help of German and Austrian prisoners of war, refugees from the Western Provinces, and Chinese immigrants.

“The polar night was attractive mainly because it was better paid,” says Oleg, captain of a small fishing boat. “‘The polar factor’ is the extra money you get for working in harsh conditions, and this is one reason to love the constant darkness. These days you hardly notice the hardship bonus, but people are somehow used to the darkness...”

Doctors estimate that the polar night interferes with the function of the human body, due to the lack of ultra-violet light and vitamins. Many people from the North become depressed and lethargic around this time of year.

During the polar night, Murmansk schools are open for a shorter time. In some educational establishments lessons start later than usual and are shortened. In kindergartens children are given vitamins and made to do strengthening exercises.

“But then the polar day is just a dream. Our electricity bill is zero,” says Vitaly, a taxi driver. “But everything we save during the summer months, we then spend on lighting the house in the winter...”

After the first day, it becomes clear that to live in Murmansk means to live in extreme conditions. “You live here at your own risk,” says Andrei, who was born and bred in Murmansk. “Next to our city is the Northern naval base (Severomorsk), the nuclear submarine base at Polyarnye Zory, and there’s also the Tulomskoe reservoir, which could flood the city!”

Thanks to Murmansk, Russia can boast the world’s first ice-resistant oil platform, the world’s first submarine vessel with nuclear power facilities, the only atomic ice-breaking fleet in the world and also the world’s only transport route across the Arctic that is constantly in operation. Murmansk is mainly seen as a strategically important port and a key link in many different transport systems – in short, a city that contributes to Russia in so many different ways.

Nevertheless, for the 307,000 odd people that live here, this city is home, with its polar nights, piercing wind, icy slopes and Northern salary. They know it affectionately as “Monamourmansk,” and its unremarkable appearance is more than made up for by the surrounding natural scenery: tundra, mountains, taiga, fjords and the ocean. If you just raise your head and look up at the sky, you can see what is probably the only mitigating factor for the long polar night – the glittering Northern Lights.