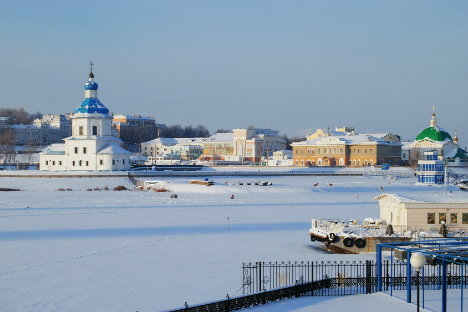 The city by the Volga is quite unique, with an interesting past and a present that has original museums and monuments that show the mix of Russian and Chuvash cultures.

Cheboksary has a reputation as one of the cleanest Russian cities and in 2002 Russian President Vladimir Putin himself awarded it as the Best Run City the year. The city is continually improving and these days new monuments to the local culture, especially cathedrals, are replacing the rusted out missile factories.

A lot of people interested in aliens and alike consider Cheboksary, or more specifically the village of Buktai which is 30 miles west of Cheboksary, to be Russia’s very own Roswell. In 1971 a Soviet SA-2 missile shot down an unidentified flying object (UFO) near there which led it to be known as ‘Russia's Roswell.’

What many probably don’t know is that there is a cultural mix in Cheboksary since the natives are called Chuvash who are descendents from a group known as the Bulgar people. The Chuvash Republic itself is populated by 1.4 million people and up to 68 percent of them are Chuvash. It has its own language too that belongs to the Turkic group of languages. What’s more it’s known to be the only remaining branch of the Old-Bulgaric language.

Aliens and ethnic groups aside, Cheboksary has some famous natives, the most famous of which, at least by Russian standards, is Vasily Chapayev. He was a celebrated Russian soldier and Red Army commander during the Russian Civil War. He was born is a village called Budayka which is now part of Cheboksary. Chapayev came to the attention of the masses in 1923 when a Russian writer called Dmitry Furmanov , who served as a commissar in Chapayev's division wrote a popular novel entitled Chapayev. Later, in 1934, it was made into a film by the Vasilyev brothers. The film was really popular in the Soviet Union and some more years later the name Chapayev became a recurring character in numerous Russian jokes.

Back to the city though, Cheboksary is actually quite a unique place, with an interesting past and a present that has original museums and monuments that show the mix of Russian and Chuvash cultures, which have been interwoven over the centuries.

Cheboksary city has a lot of museums, I can recommend some of the best or weirdest ones. One museum which it not so much weird as it is different is the Cheboksary beer museum.

Not only is it Russia’s only beer museum, it’s also one of Cheboksary's most popular tourist attractions. The building itself is quite unique and is made of wood in the style of an old-time beer hall. The interior is kind of dark, the floor is a bit rickety, and lined up on shelves you can see old brewing artifacts. At the end of the tour you get led into a drink-bar which brings the tour to an end, but what better way to finish a tour around a beer museum than with a mug of beer?

Next up on the museum list is one history fans might enjoy. This museum is called the Museum of Chuvash History and is essentially a fascinating look into the evolution of residents of this region, right from caveman to Soviet super-workers. You’ll be able to see over 50 life-size exhibits. One scene of note is a "family of the 18th century", depicting how upwards of six children, their parents and grandparents crammed together in a log cabin. Mom and dad slept on top of a giant stone hearth, with the ceiling only two feet over them.

Another cool museum in the city is the Chapayev Museum, which is a branch of the Chuvash national museum that opened in 1974. The Chapayev Museum isn’t too far away from where the man himself was born.

So moving on from museums, fans of Russian churches will also have something to see, or should I say at least 10 things to see! If you are on a tight time budget, then I suppose the main one you should see would be the Cathedral of the Blessed Virgin Presentation which is the oldest in Cheboksary. It’s been around since the 17th century. Construction was ordered by Tsar Ivan IV dubbed the Terrible and its site was blessed in 1555, but it was only in 1657 that the cathedral was actually built.

Of course, this is one of the many really impressive churches that you will come across in the city.

Now one place you’ll want to see, in fact, you can’t really miss it, is the recently completed bay area which is right in the middle of the city. It’s now the most popular gathering place for the locals and it’s the place of choice to stroll around, visit cafes, and socialize. As a bonus, Cheboksary also has beautiful boardwalks and beaches along the Volga River, where people swim in the summer.

Another nice, albeit military-themed, place for a walk is Victory Park which you can find on the very highest shore of the Volga in Cheboksary. There are a few neat things to see in this park, including a Monument to the Glory of the WW2, eternal flame and all sorts of other war monuments, but not just the Second World War. There are also monuments to the soldiers who were killed in Chechnya. If you prefer your parks to be lighter on military stuff, there is still a healthy selection of more traditional parks to see and relax in.

Generally Cheboksary is quite a well-developed cultural centre and has a philharmonic orchestra, opera-ballet theatre and a lot of other theatres where you can see plays on Russian and Chuvash languages.

Since you’ve heard a bit about what the city has on offer, it’s probably about time to look into the history. Now the Cheboksary settlement was first time mentioned by the Russian while they were on their way to Kazan Khanate in 1469. During the Kazan Khanate (Kanate) period the town most probably had the Turkic or Tatar name of Cabaqsar which is close to its present name.

The real thing the town was famous for was its many churches (there were 25 churches and 4 monasteries); Cheboksary’s church bells were even known in London and Paris.

Today you can still see some truly beautiful churches and enjoy Russia’s very cleanest of cities. Cheboksary might not be Brussels, but in the next ten years it should well be on par with Prague or Riga. Of course, that doesn’t mean that it’s not worth a visit today!