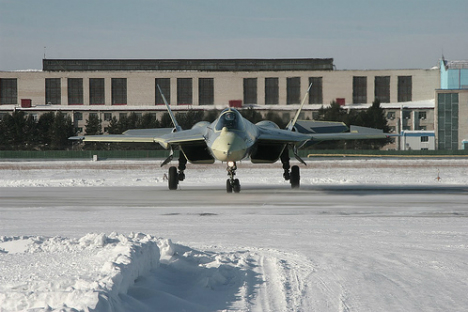 The decision to introduce the new fighter is long overdue: the United State launched it seven years ago and China is also trying to keep pace.

The Russian Armed Forces will soon put into service the fifth-generation T-50 PAK FA jet fighter (Prospective Airborne Complex of Frontline Aviation). The decision to introduce the new fighter is long overdue: the United State launched the F-22 Raptor seven years ago. China is also trying to keep pace, as it has started testing its own fifth-generation fighter.

In late December, Viktor Bondarev, Commander-in-Chief of the Air Force, said that the trials of the fifth-generation PAK FA fighters would start at the testing facility in Akhtubinsk in March 2013.

“Three machines are being tested at Zhukovsky Airfield in the Moscow region, the fourth fighter is undergoing factory tests, and the fifth one is ready for acceptance. In March, the five machines will fly to Akhtubinsk to begin government testing. The rest of the machines will be delivered there from the factory. By the end of 2013, eight T-50 fighters will have been accepted following trials in Akhtubinsk,” said the general.

The T-50 is equipped with an all-new avionics complex and an advanced radar station with a phased antenna. The plane made its maiden flight to Komsomolsk-on-Amur on 29 January 2010; the fighter was officially presented to the public on 17 August 2011 at the MAKS 2011 International Aviation & Space Salon in Zhukovsky near Moscow.

Many of the T-50’s technical features are classified, however based on data received from public sources, specialists insist that the PAK FA is ahead of its foreign peers based on a few important features, including maximum speed (both using afterburners and without them), ferry range, thrust/weight ratio, and maximum g-load.

The T-50 is operated by a single pilot. The machine has a maximum speed of 2,600 kilometres per hour. Its ferry range is 4,300 kilometres at altitudes of up to 20 kilometres. With a maximum takeoff weight of 37 tons, the fighter is capable of carrying up to 10 tons of armaments, including the GSh-30-1 30 mm cannon, guided missiles of various types and ranges, as well as precision guided bombs. Up to eight external and ten internal suspension points can be installed to attach armaments. More than ten innovative types of weapons have been developed for the PAK FA.

Foreign media have also praised the Russian plane as having clear advantages over the American fifth-generation planes. In mid-autumn, Australian military analysts at Air Power Australia issued a report comparing the Sukhoi PAK FA with its American peers F-22 Raptor and F-35 Lightening II. Based on their conclusions, the new Russian jet fighter is superior to its existing foreign analogues based on many of its features.

The T-50 uses a new aerodynamic design that minimizes heat and optical signature.

The significant proportion of composite materials used in the fighter, up to 70% in the body skin and 40% of the entire structure, makes the plane virtually invisible to radars. The fighter is equipped with innovative radar systems designed by the Tikhomirov Scientific Research Institute, which, coupled with the two onboard computers, ensure target detection at a range of up to 400 kilometres, tracking of up to 60 air targets and shooting at up to 16 targets at a time. Its radio warfare systems and infrared reduction systems effectively protect the plane from air defence weapons, specifically, from the radars currently operated in the United States, the report reads.

Experts also mention the remarkable flight characteristics of the T-50. The machine is powered by two AL-41F-1A turbofans with an integrated digital control system featuring 2D thrust vectoring. The use of high-performance engines resulted in a very high thrust to weight ratio, which stands behind the T-50’s air superiority, higher missile and bomb load, service ceiling and speed characteristics.

Another advantage of the T-50 over its peers is its unusually high fuel capacity, which enables it to carry out longer missions and ensures longer ranges as compared to the F-22 and F-35.

The Russian fifth-generation T-50 PAK FA fighter is therefore capable of becoming the leader among its competitors.