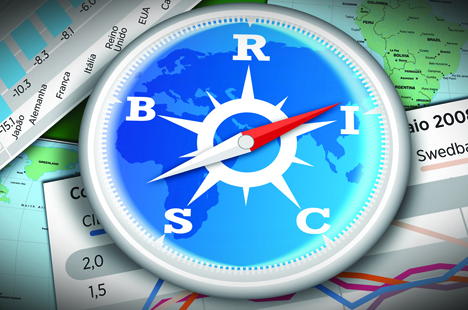 The Delhi BRICS meetings last week that covered global governance, security and health, appeared timely as these issues are crucial in the world which is currently undergoing many transformations.

New Delhi hosted two separate meetings of BRICS leaders and bureaucrats last week. The meetings on two broad areas of global governance, security and health, appeared timely as these issues are crucial in the world which is currently undergoing many transformations. Besides, the issues of cyber security, extremism and terrorism, the situation in the Middle East and health issues, were deliberated in these meetings, signifying the seriousness of the grouping to stay relevant in the changing world and pose a joint front.

As the Indian National Security Advisor, Shiva Shankar Menon elaborated, the meeting on security “concentrated on important regional and global developments. Naturally, West Asia, North Africa was major part of what we discussed. Syria, Libya, Mali (also figured). We also discussed ways to enhance our cooperation and coordination in cyber security, terrorism and piracy and other such threats to international security.”

One of the crucial issues that dominated deliberations at New Delhi is the issue of cyber security. In the full blown information age, when almost every aspect of human endeavour is touched and facilitated by information technology, the nations have become increasingly aware of this dimension of technology and geared their policy mechanisms to protect their national security by ensuring that the technology base they have is not compromised.

The past decade has witnessed the rapid rise in the cases of hacking of classified national databases on issues related to defence, scientific establishments and closed room negotiations. It is not unusual to come across news reports when nations accuse their rivals of stealing crucial information by manipulating the communications technology they have at their command.

Perhaps none of the countries in the world, including the BRICS countries, are untouched by this emerging scenario. India in the recent past has alleged that its rivals have attempted to compromise its national security, and the same allegations too are heard from other countries of the grouping. From this perspective, the meeting of National Security Advisors of the BRICS countries in New Delhi on January 10 assumed special significance. Interestingly, some of the countries in the grouping have accused the other within the grouping of infringement of national security, and hence coming together of these countries will build up trust between them, and minimize the risks of cyber security threat. Menon pointed out that there was a detail discussion on cyber security among the countries and they are “in the process of putting in place rules, structures and systems to deal with the issue.”

The focus on terrorism too appeared timely. Terrorism, though surfaced earlier, has become a raging phenomenon in the 21st century, and perhaps no multiethnic and pluralistic country in the globe remained untouched from its menace. The countries of the grouping particularly India, Russia and China have confronted this menace and invested a significant amount of national resources and intelligence to tackle it. Russia’s problems in the North Caucasus, India’s in Kashmir and North East, and China’s Xinjiang region are well known cases, in which terrorism coupled with religious fundamentalism has wrecked havoc in terms of loss of innocent lives, and material loss. The terrorists also have used cyber technology to their advantage. Hence, the coordination of the countries on this issue, and the likely formation of ‘emergency response teams,’ as revealed by Menon, to tackle cyber security threats may prove effective in confronting the menace.
As Afghanistan is passing through a phase of turmoil, with the Taliban emerging a powerful player in the process, it can prove a crucial step if the countries of the grouping, particularly India, Russia and China come together and develop a common framework to address terrorism and religious fundamentalism issues in the region, which has wider ramifications for the neighbours and for the globe.

The grouping developed a common position on the issue of Syria, and emphasised that the dialogue process has to be Syrian-led, and reiterated that “the BRICS nations are against military intervention” against the country. Syria case, unlike some other candidates of Arab Spring, has become a difficult nut to crack. The much hyped regime change with the support of rebels, some of whom are indoctrinated by the Al Qaeda ideology and supplied arms from some neighbouring countries with sectarian agendas, has not worked out.
This approach of engineering regime change has faltered. Assad appears, as can be gauged from his January 6 speech, determined to continue the flight till the end without ceding ground to the rebels. His call for ceasefire and dialogue may be a significant turning point in engaging in dialogue. Already Russia is playing a dynamic role in defusing the crisis in the country, and there are already hectic parleys, some of them ongoing, between the Arab and UN representative, and Russian and the US diplomats at Geneva to work towards a political solution of the crisis.

The common position of the BRICS countries, a rising front in international politics, on the issue may help in furthering a political process of resolving the crisis. Two of the members in the United Nations Security Council and other members having rising global clout – BRICS is poised to play a significant role not only in the Syrian crisis but also in addressing other international problems.

There are other points which need to be brought out in the context of the New Delhi meeting. Secretary of Security Council of Russia, Nikolai Patrushev met his Chinese counterpart State Councilor, Dai Bingguo in Beijing before coming to New Delhi, where they met with Shiv Shankar Menon, and Ricardo Paes de Barros, Secretary for Strategic Actions of Brazil and Siyabonga Cwele of South Africa. India, Russia and China too have other forums for deliberations like Russia-India-China forum, G-20, and grouping like SCO. Menon and Bingguo are since long heading respective country team to deliberate on border issues. Despite the leadership change in China recently, the policy will likely continue in the same pace. Though there are differences on some crucial issues, the emerging imperative of cooperation and economic diplomacy will guide the relations between the countries of the grouping. The likely establishment of a BRICS bank during the forthcoming summit at Durban in South Africa in coming March will further strengthen this economic content of relationship.

The BRICS members’ meeting in New Delhi on January 10-11 on health coincides with their meeting on security. The health issue initially figured during the Sanya declaration in China in April 2011. The New Delhi meeting will be the second such meet on health after the one in Beijing in July 2011. It further carries forward the spirit of the last meeting. It will likely emphasize on the importance for technology transfer as a means to empower developing countries and the role of generic medicines in the realization of the right to health.
BRICS countries which consist of about of half of the world’s population need to prioritize research and development to ensure a robust human capital for economic growth as well as a healthy citizenry. The New Delhi summit in March 2012 emphasized on the institutionalisation of the health meetings so that the grouping could address common goals of innovation and universal access to health technologies including medicines. The grouping has also emphasized on the coordination policies to address growing costs and burden of both communicable diseases and non-communicable diseases.

The coming years will likely witness flow of knowledge among the institutions of the member countries through joint projects, workshops and exchange of visits by scientists. As pointed out by P. K. Pradhan, Indian Health and Family Welfare Ministry Secretary, at the opening of the meeting on January 10, “BRICS gives us a very important platform to be able to do that in an environment of trust and co-operation. I am sure that this can be achieved if we agree to discuss issues on a positive note, in a constructive manner, and in the utmost spirit of trust and co-operation.”