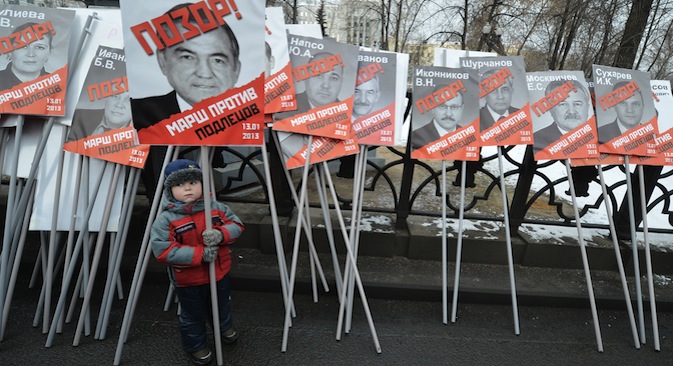 "March against the Scum" in central Moscow brough together those who want to protest the notorious anti-Magnitsky law. Source: RIA Novosti / Ilya Pitalev

Once again, opposition activists and ordinary Russians took to the street to protest against the controversial Dima Yakovlev law, know as anti-Magnitsky law banning child adoptions by U.S. citizens. While the Kremlin shares protestors' concern about orphan's plight, some opposition activists describe the demonstration as "a pro-American action, the first one since perestroika."

In an attempt to express indignation toward the notorious Dima Yakovlev law known as anti-Magnitsky law banning child adoptions by U.S. citizens, oppositon activists and ordinary people took to the streets in central Moscow.

The participants of the rally, that was named "March against the Scum," gathered in Moscow's Strastnoy Boulevard.

According to the police, up to 9,500 people took part in the protest against the law. Meanwhile, one of the opposition leaders, Sergei Udaltsov, claims that the demonstration brought together from 30,000 to 50,000 protesters.

Many of them carried flags and placards calling for the cancelation of the law. Participants in the opposition action were allowed to enter only the assigned territory through walk-though metal detectors.

The police paid special attention to the contents of the placards and forced one activist to drop his placard, because the police found that it did not comply with the objectives of the rally.

People who came to Strastnoy Boulevard got ballots to vote for the dissolution of the State Duma and for the abolition to the Dima Yakovlev law banning child adoptions by U.S. citizens. In additon, they also brought placards denouncing the Duma deputies who voted for the Dima Yakovlev law.

As a result of the protests, nine people were detained becuase they appeared drunk in a public place, the Interior Ministry said.

"Law enforcers detained nine people for violating rules of participation in massive events," it told Interfax. "They were drunk and used foul language."

Russian regions against the anti-Magnitsky law

A series of rallies againts the Dima Yakovlev law took place in several Russian cities. For example, the St. Petersburg protests brought together about 1,000 people on Sunday, according to Interfax.

There were no breaches of public order, law enforcement officers said. Participants of the rally held placards against the Dima Yakovlev law and chanted "Hands off children!"

The opposition pickets against the anti-Magnitsky law was also held in Tomsk, Barnaul, Yekaterinburg and other Russian cities. People took to the streets regardless of the severe cold.

"Despite the wind and frost, some 100 people turned up," said organizer of the Yekaterinburg rally Alexander Bychkov in an interview with Interfax. "It is good that the issue troubles people and that matters that should arouse discontent arouse it, namely the fact that children are used in political games."

"Concern about how we could offer a better life to orphaned children definitely deserves attention and is easy to understand," he said. "We hope people who have filled the streets to speak their minds are informed about the leadership's plans to adjust the adoption process and to initiative measures to ease orphaned children's lives," he said.

At the same time Peskov describes the calls for disbanding the State Duma as "absolutely nonconstructive" and thinks that they don't "deserve attention."

Opposition activist, writer and leader of the unregistered Other Russia party Eduard Limonov argues that the organizers of the march against the "anti-Magnitsky law" acted in the United States' interests.

"All have taken off their masks," he told Interfax. "It is a pro-American action, the first one since perestroika. They have crossed the Rubicon. The so-called Moscow creative class, dressed in their  sheepskin coats, has separated from the country and the people."

"It was a remarkable action in that it sealed a breakaway from the country and the people," he added. "What can I say? Have a nice journey to the U.S.! Several thousand well-to-do Muscovite intellectuals  were deceived into joining the march by the organizers who had played on their hearts' strings, using disabled children as a bait."

Limonov recently proposed a ban on foreign adoptions of Russian children, saying that Russia  has enough revenue from selling oil and gas to solve the orphanages problems.