Depardieu weighs in on Russian politics 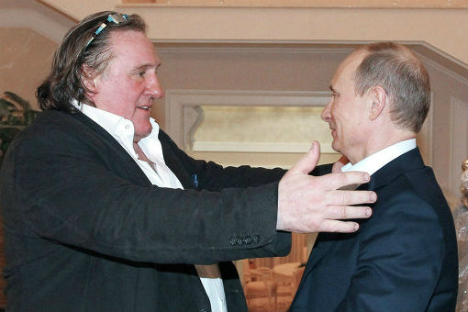 “The Russian opposition has no program, nothing,” he said in an interview Sunday night on state television channel Rossia 1.

He added that having very intelligent leaders like former chess champion Garry Kasparov was not enough. “Politics is a little more complicated,” he said.

Depardieu followed up the much-publicised meeting with a trip to Mordovia, a Finno-Ugric region on the Volga River, were he was elevated to something of a national icon.

State television feted the actor's visit, showing footage of him putting on a local ethnic costume and showing off his new passport during a public reception in Saransk, the regional capital.

The actor was reportedly offered an apartment as his official residence in Mordovia, but he declined an offer to become the republic's culture minister, saying he is already “the world's culture minister,” Russian News Service Radio reported, quoting State Film Fund (Gosfilmofond) director Nikolai Borodachyov.

Depardieu was subsequently offered the title of an honorary Udmurt by activists in Udmurtia, another Finnic-speaking region.  A Communist State Duma deputy asked him to join the Communist Party, and a theatre in the Siberian city of Tyumen offered him a job, albeit for a humble 16,000 roubles ($527) per month.

He said that if band members had performed in a mosque, “they would not have come out alive,” and he added that their behaviour would have caused outrage even in the Catholic world. Similar arguments have been made by Putin in the past.

“If I say such things in France, I'm labelled an idiot,” he said.

However, Depardieu's decision to accept Russian citizenship elicited heaps of mockery and criticism both inside and outside the country.

On Saturday's episode of ‘On N'est Pas CouchО,’ a popular late-night show on French television, actor Jonathan Lambert staggers on stage pretending to be Yury Depardioff, who speaks with a heavy Russian accent.

Critics said that Depardieu's original aim of saving money on taxes was invalid because he would not be eligible and that his trip to Russia was just a PR stunt for Putin that deals a blow to Francois Hollande, the socialist French president, who had planned a 75 percent marginal income tax for wealthy citizens.

They also questioned how Depardieu, who reportedly arrived by private plane, would legally travel between Russia and Europe, which have stringent visa requirements, after trading his French passport for a Russian one.

Russian law stipulates that foreigners from most countries must give up their previous citizenship on becoming Russians.

However, Depardieu has said in recent interviews that he is not yet ready to give up his French citizenship and that he would continue to seek a Belgian passport. National media reports said that under French law, anybody wishing to give up citizenship must wait for one year for the change to take effect.

Others said Putin's decision to decree citizenship to Depardieu is a slap in the face for thousands of former Soviet citizens, who face massive and cumbersome bureaucratic hurdles to obtain a Russian passport.

One often-quoted example is former Olympic gymnast Maria Filatova, who has been left a stateless U.S. resident after fighting for more than 10 years to get Russian citizenship.

A Gazeta.ru investigation that lists all the documents required for applicants quoted Putin's spokesman, Dmitry Peskov, as saying that the Russian Consulate in Paris dealt with Depardieu's case, which occurred during the country's New Year's holidays.

“[Putin's] decree is practically an order for those agencies concerned,” he was quoted as saying.

However, Russian law requires a presidential decree for every case in which citizenship is being obtained, restored or given up. A search on the Kremlin's website Sunday yielded just three results from the past six months.

In an indication of how rarely that process is successful, the decrees, dating from August, November and December, list just 96 cases in which citizenship was obtained or restored.

Putin announced last year that the rules for getting citizenship should be eased, an initiative that has been assailed by nationalists, who fear that the country will be swamped by migrant workers from Central Asia.

But most of the criticism focused on Depardieu's image, which has suffered blows recently. The once-famed actor made headlines when he urinated in an airplane aisle and fell off a motorcycle in Paris.

The actor, who showed up at a controversial 2010 dinner gala at which Putin sang ‘Blueberry Hill,’ has been condemned by human rights activists for appearing at a birthday gala for Chechen leader Ramzan Kadyrov and for appearing in a music video with Gulnara Karimova, the daughter of Uzbekistan's authoritarian president, Islam Karimov.

But Sergei Markov, a pro-Kremlin analyst and vice rector of the Plekhanov Institute, said the whole story was a big win for Putin because it showed the world that famous people are ready to come to Russia.

“And it is a wonderful Christmas present for the Russian people that such a great actor joined them,” he added.