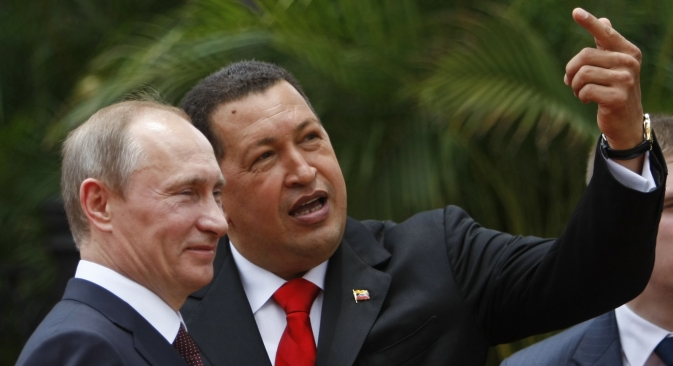 The main foreign political intrigue of the last few days has come to a close, with the inauguration of Venezuelan President Hugo Chavez having been postponed indefinitely. The opposition demanded a new presidential election, and the Venezuelan Supreme Court has ruled that the delay in the inauguration date was lawful and in line with the country’s constitution.

Moscow sees elections in Venezuela as meeting all democratic standards

Despite the final decision of the court, which was announced on Jan. 9, the situation in the country remains tense. Venezuela may find itself on the verge of a political crisis, and Moscow is keeping a watchful eye on Chavez’s health.

The Kremlin’s press service reported that, during the final days of December, President Vladimir Putin sent Christmas and New Year’s greetings to Chavez and expressed certainty that his strength and vitality would help the Latin American leader overcome recent challenges; Putin also reassured Chavez that the Bolivarian Republic of Venezuela would continue developing successfully under his leadership.

Russia’s concerns about Chavez’s health are easy to explain. The personal relations between the presidents of Russia and Venezuela have always been warm and friendly. Some political experts insist that Putin has found a soul mate in South America.

The Venezuelan president has also repeatedly emphasized the significance of the country’s relations with Russia, seeing the latter as a guarantor of the multipolar world and their relationship as fundamental to building a balanced world order.

Venezuela and Russia are linked by numerous oil and military contracts. In October 2011, a bilateral arrangement was signed worth a total of $8 billion (including a $4 billion loan to Venezuela as part of a collaborative military and technical program). The National Oil Consortium and Venezuelan PDVSA will establish a joint venture for the production of oil in the Orinoco oil belt on the Carabobo 2 deposit, with estimated reserves of 40,000 barrels per day.

The first oil has been already produced on the Junin 6 block, which is a project also involving Russian specialists. The political crisis looming in Venezuela might thwart these projects: Russian financial analysts have not ruled out such a possibility, although it is very unlikely.

Investcafe analyst Grigory Birg says that Venezuela has colossal reserves of heavy crude oil, but it requires the investments and expertise of international oil companies to develop them. In order to realize its ambitious oil production plans, Venezuela needs Russian investors. Still, if things change, anything could happen.

The military contracts signed during the last seven years are at risk as well. As of the beginning of 2012, the Venezuelan book of orders was estimated at $6-7 billion (not including the $4 billion loan that Russia extended to Caracas to encourage military and technical collaboration).

The numerous oil and gas contracts, along with the credit line allowing Venezuela to buy Russian arms, essentially create the only foundation for bilateral trade and economic relations between the two states. There has yet to be anything to offset the economic imbalances in mutual trade.

Nevertheless, Venezuela remains Russia’s main economic and political ally in the region. It was Venezuela that opened the doors for Russia to enter the sensitive Latin American market for military technologies. Venezuela facilitated Russia’s involvement in major investment projects in the region, benefiting from the open support of the country’s leader.

“It is far too early to make any predictions about whether Chavez will return to politics, as it depends entirely on Cuban medical experts,” says Andrei Pyatakov, senior associate at the Institute of Latin America of the Russian Academy of Sciences.

“Two probable scenarios for the Bolivarian Revolution can be identified. The first is that the opposition will become more active: despite the defeat at the presidential and regional elections, it remains quite popular. Second, there may be a split within the ruling party itself. If the differences become more pronounced, then Venezuela may be in for a political crisis,” said Pyatakov.

According to Pyatakov, if the opposition manages to get the administration to call a new election, orthodox Chavism will stand no chance of staying in power. However, Russian-Venezuelan relations will hardly undergo dramatic transformations.

The opposition is interested in keeping lucrative bilateral contracts in the oil sector, although a certain de-politicization of the bilateral framework is possible, Pyatakov believes. This will result in a slump in the economic component of collaboration with Russia. Furthermore, should the opposition come to power in Venezuela, there is scarcely any hope for Russian companies that cooperation will be given a boost or that new contracts will be signed.

Venezuela is entering a new and lengthy phase of profound changes. It is important for Russia to realize that its Latin American ally will never be the same again.