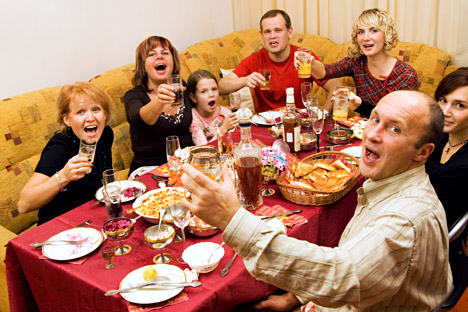 A public opinion poll conducted by the state-run Public Opinion Research Centre reveals that Russians are happier and more satisfied with their lives now than at any other time in the past seven years.

Russians are returning to their homes and places of work after enjoying the 10-day New Year holidays which Russia’s chief doctor Gennady Onishchenko had described at the beginning of the holidays as “10 days of horror,” warning the people of the rising dangerous hazards of  excessive drunkenness and deadly fire accidents during the festive period.

“We are standing on the threshold of these 10 days of horror, when the overwhelming majority of the population will be left to their own devices, and there is no worse enemy for a Russian than he himself,” Onishchenko had told journalists on the eve of the New Year.

“At best, it is absolutely meaningless, watching the television screen unblinkingly, the complete spiritual indiscriminateness of the substitutes that come to us from the screen,” he said, adding “The most humane thing there, in my opinion, is the broadcasts about murder and  ending it all with gluttony, the immeasurable consumption of alcohol, which spills over, of course, into an unhealthy situation for each family.”

Onishchenko also urged the Russians with children not to drink on New Year’s Eve. “You will be greeting the New Year with your family and, as head of the family, you will be setting a bad example,” he said, asking “Or are you not happy to be with your family?”

He also advised the New Year holiday makers to head to northern Russia, instead of journeying to warmer countries. “There is Losiny Ostrov and Sokolniki, and for more aesthetic moods, there is the Russian North and skiing,” he said.

However, a public opinion poll conducted by the state-run Public Opinion Research Centre (VTsIOM) published after the holidays, this week, had presented a different picture, saying Russians are happier and more satisfied with their lives now than at any other time in the past seven years.

In the poll, Russians' overall satisfaction with life earned a score of 60 percent, up from 43 percent in 2011.

The poll, released on Thursday, involved 1,600 respondents, and was conducted December 22-23 in 46 Russian regions. The margin of error is 3.4 percent.

Not only this. Russians are also more positive than before about their families' financial situations - 64 percent in 2012 compared to 55 in 2011 and 37 percent in December 2005, the earliest date for which the centre released results of the annual poll. The scoring system runs from minus 100 for most negative attitude to 100 for most positive.

The poll also pointed out to a greater optimism among Russians about how they will be living a year from now, with that score up to 66 percent from 53 percent last year.

The New Year’s holiday makers also ignored Onishchenko’s advice not to travel to warmer countries, which is evident from the latest statistics to the effect that during the holidays Russia’s two biggest airports - Moscow's Sheremetyevo and Domodedovo airports - handled a total of 2.2 million passengers.

Moscow’s Domodedovo and Sheremetyevo airports handled 1.2 million and slightly over 1 million passengers respectively in the period from December 24 to January 8, the press services of two airports told Interfax news agency. Sheremetyevo said the holiday figures were up 9.4 percent from the previous year.

“The most popular charter destinations over the New Year holidays were Sharm el-Sheikh, Hurghada, Tel Aviv, Phuket, Goa, Marsa and Taba (Egypt). Among traditional winter holiday destinations, the most popular were Prague, Paris, Rome, Salzburg, Geneva, New York and Munich,” the airport said. It handled about 75,000 charter flight passengers over the holidays, 23 percent more than a year earlier.

“For us, the period from December 29 to January 13 will be more indicative. The number of outbound flights increases dramatically starting December 29, and inbound flights will peak at the end of this week. Therefore, it's still early to report the final results,” Domodedovo spokesman Yevgeny Konoplev said.

Earlier this week, Russian Economic Development Ministry said in its New Year forecast that people could expect to see their real wages rise in 2013, but along with that will also come higher utilities tariffs.

However, utilities bills will also rise in 2013, with electricity costing 12 to 15 percent more, while heating bills will rise by 8 to 10 percent.

Children, students and the elderly people will also have to undergo annual medical examinations, as part of a government initiative to keep people healthy by boosting preventive medicine and detecting problems in advance, it said.

According to the VTsIOM poll, released this week, most Russians consider the critical situation in the housing and utilities sector, inflation and low living standards and corruption as the most pressing problems in the country.

The majority of respondents, 58 percent, said housing and utilities problems were their main concerns. Electricity charges are due to rise 12-15 percent by July 2013, while heating charges will go up 8-10 percent, and natural gas prices are set to rise at a rate of 15 percent a year in the near future.

Corruption and low living standards were listed as important by 50 and 51 percent of the respondents, respectively.

Foreigners coming to Moscow, often ask how much money a Russian citizen wants to be happy?

According to a latest poll conducted by the Foundation ‘Public Opinion’ towards the end of the 2012, Russians do not need luxury villas on islands, garages filled with expensive cars, yachts, vineyards or chambers full of gold to be happy. The average Russian wants to earn about $3,200 a month to be happy.

At the same time, in contrast to the average Russian citizen, people in Moscow need a bit more to be happy.

Muscovites would ideally like to have a salary of $4,000. Earning this amount each month, they could enjoy and be happy living in one of the most expensive cities in the world, the poll said.

Onishchenko, who has headed the watchdog Federal Consumer Protection Service since 1996, is known for making statements that many consider flamboyant and far-fetched.

Last August, he spoke out against the dangers of drinking kefir and driving, an act that he equated with drunk driving. Kefir is a traditional Russian dairy product with a minuscule amount of alcohol. Earlier, in February, he had advised people “who don't know how to dress properly for the cold” to avoid attending political rallies.

As for what awaits Russians after the “10 days of New Year’s horror,” Russia’s top doctor had one prognosis for the immediate future: an increase in flu cases in the second half of January.