Bratsk - a city on the Angara River 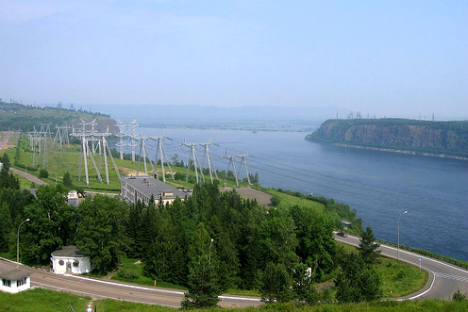 Bratsk - a city on the Angara River. Source: Flickr/SilverHorse

This industrial city is a pretty important base for assimilation of northern parts of Eastern Siberia and the Russian Far East.

Bratsk is a city in the Irkutsk region which is on the Angara River near the vast Bratsk Reservoir. The population is not so big in comparison to other Russian towns at the 260,000 mark. The actual city that you can see today was formed in 1956 thanks to construction of Bratsk hydro power station, which is to the north of an ancient settlement of Bratsk which founded in 1631 as a jail.

But from parts that used to be jails, the Bratsk of today is one of the largest industrial and economic centres in the Irkutsk region and Eastern Siberia. Bratsk is actually a pretty important base for assimilation of northern parts of Eastern Siberia and the Far East too.

Bratsk is located in what you could call severe climatic conditions, but despite this, its economic and geographical location are favourable enough and have developed infrastructure, highways, lines of electricity transmission, an international airport and pretty high resource potential.

If you’re wondering just how severe the climate conditions are, then you can expect mainly dry winters and frosty and hot and dry summers. The average January temperature is - 24 degrees so make sure you wrap up warm if you decide to visit around that time.

As for the city name Bratsk, a lot of people, Russian people at least, think it comes from the Russian word for 'brother' ('brat'), since they sound the same. In reality it actually comes from ‘bratskiye lyudi’, which is an old name for the Buryat people.

Well one thing that’s a bit different in Bratsk is the street names and statues. Unlike in Moscow, where most of the communist-esque street names were changed after 1990, in Bratsk the street names stayed mostly unchanged. Also, you can still find plenty of Lenin statues to take pictures of and with. Originally the Siberian cities simply could not afford the large expenses incurred by renaming most of the city streets (and the addresses of all the institutions and companies along with them). But now they came to the conclusion that the old names and statues are part of their history and should be kept as they are. For some, statues of the past are cool tourist attractions.

Speaking of other attractions though, probably one of the main ones is the Bratsk hydro power plant. The height of its separate installations are 125 meters high and the reservoir made by the plant takes up 5470 sqm, which makes it one of the biggest reservoirs in Russia.

Another thing you should definitely not miss is Angara Village. It’s an open-air ethnographic museum featuring a rare wooden watchtower and other buildings. It’s 12 km away from the centre of Bratsk and as I mentioned, you can see reconstructed homes and get a feel for what an old, traditional Russian village used to look like.

One of the nice museums in the city is the Bratsk art exhibition hall, so if you felt like some good old fashion art museum action, then this would be a good place for you to see.

If you feel like getting a bit more active, you can head out about 70km from Bratsk and enjoy some skiing on Pikhtovy mountin (Пихтовая гора). Apart from traditional skiing here a new snowboard park has recently been opened near the slope and it has a half pipe too if you feel like brushing up on your skills.

You could say that Bratsk’s history begins in 1623 when a unit of 40 soldiers arrived there. This was really quite an incredible trek, since back then this was all unknown territory. Once they had arrived, they were ordered to try and collect tax from the locals, in fact in 1636 the first fort was built there at the confluence of the Oka and Angara rivers to enforce the tax collection from natives. By the 1640's there were already some peasants at the fort growing crops and in the late 1600s, a monastery was built at the fort. More people began to settle, gradually forming more communities and homesteads. In 1805, the newly established Bratsk komissarstvo (administrative unit) had 5210 inhabitants.

After the fortress lost its military importance the settlement received the name of Bratsko-Ostrozhnoye or sometimes simply Bratskoye which then later became Bratsk.

By 1910, there were 60 communities with 14,006 people and interestingly enough this included over 5000 political exiles.

Cutting to the last century, the city saw a boost during the Second World War when there was an increase in industrial activity in Siberia, as Soviet industry was moved to the lands east of the Urals. After the war's end, development slowed, but not for too long.

On the late 1940s the Gulag Angara prison labour camp was constructed near Bratsk, which could hold up to 44,000 prisoners who were used for projects such as the construction of the railways and other hard labour.

A more positive and major industrial event that happened to the city was the construction of Bratsk hydro power station which if you remember, I mentioned just a bit earlier. Once the decision was made to build the Bratsk dam and hydroelectric station there was a massive influx of new inhabitants. During their first year, some of them even had to live in tents.

The city of Bratsk as it stands today was officially formed in 1955 when it was joined by some other groups of settlements.

Today Bratsk is one of the major sports centres of the Siberian federal region. It’s actually got over 275 sports objects including 81 gyms, 5 swimming pools and 4stadiums. Over 17.5 percent of the population practice or play sports and it is around 44,500 people.

So there you have what you could call the highlights of the city’s history. Although Bratsk is, in essence, industrial, there are still a good few things to see and do there.