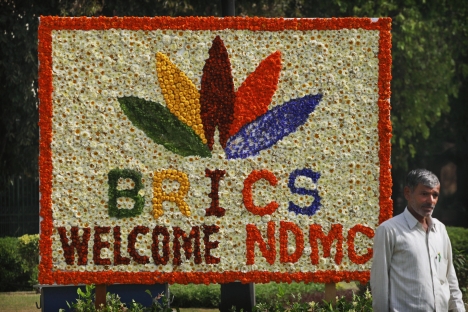 Top security representatives from BRICS countries gathered at a meeting in New Delhi, where they discussed strategies for countering international terrorism, piracy and cyber-crime.

Developing and continuing cooperation with the BRICS countries (Brazil, Russia, India, China and South Africa) is one of the main objectives of Russian foreign policy, said the secretary of the Russian Federation’s Security Council, Nikolai Patrushev, speaking in New Delhi on Thursday, Jan. 10.

“The BRICS phenomenon is a unique symbol of a multipolar world. Moreover, it is a powerful catalyst for promoting further development in this direction. As far as Russia is concerned, continued participation in BRICS is one of the main priorities of our foreign policy,” said Patrushev at the conclusion of the BRICS meeting on security issues.

The meeting was the first separate meeting of its kind – previously, security was discussed as one of many issues to be raised at general summits of BRICS leaders, notes RIA Novosti. The discussions covered general questions concerning the international situation, with a special emphasis on the situations in the Middle East and North Africa. BRICS security representatives also talked about issues surrounding information security.

At the meeting, according to Patrushev, BRICS representatives underlined the necessity to coordinate BRICS security initiatives not just between the five members, but also with other international platforms and organizations (particularly with the UN): for example, leaders of the BRICS countries recognized the need to create mechanisms to work toward preventing terrorist activity and other crimes being propagated on the Internet at an international level.

“We should not limit free access to information… But if someone is disseminating harmful information or inciting people to criminal activity, this person should be held responsible,” said Patrushev.

Russia’s security secretary believes that one of the first steps in this area could be the preparation of a draft declaration from leaders of the BRICS countries. Patrushev also believes this could potentially go on to take the form of an official agreement.

In 2012, Russia and China came out in favor of an overhaul of the way the Internet is regulated.

The two countries believe that the current system, whereby the Internet is controlled by private American companies, is outdated and does not meet the demands of the web in its current state. The Russian delegation proposed handing over Internet controls to UN and ITU structures, as well as making it possible for individual states to regulate the technical side of the web as they deem necessary.

“We are concerned by cases of commercial vessels falling victim to acts of marine piracy and armed robbery, and that Russian citizens working on board these vessels are being taken hostage,” said Patrushev.

In his opinion, the people of Somalia – and, increasingly, people in other West African countries – join piracy gangs due to extremely low living conditions and the culture of impunity in these countries. As he noted, the international community should be aware that, up until now, it has been fighting the symptoms rather than the causes of the problem.

“We need to seek out the real organizers of the criminal business, as well as other private individuals and legal entities benefiting from piracy,” said Patrushev, as quoted in Rossiyskaya Gazeta.

Patrushev also emphasized the fact that the situation in the world is changing, and that the leaders of the BRICS countries believe it is changing for the worse.

“The global economic and political systems are changing before our very eyes. They are exceptionally dynamic and, unfortunately, the changes do not appear to be for the best. The global economic crisis is creating problems, raising issues that need to be solved urgently… We are seeing economies collapsing in a number of countries,” said Patrushev. Over the meeting, many expressed the opinion that the BRICS countries have what it takes to drive the global economy.

The next BRICS meeting on security issues is expected to take place later this year in South Africa, where another BRICS summit will be held in March, reports RIA Novosti.

Before 2011, the group of BRICS countries (the world’s most up-and-coming countries in terms of economic and political influence) was known under the acronym BRIC. This term was coined in November 2001 by Jim O’Neill, an analyst working for Goldman Sachs’s, and it first appeared in one of the bank’s analytical reports. After South Africa joined the BRIC group in 2011, these countries became collectively known as BRICS.

The article is based on materials from RIA Novosti, Rossiyskaya Gazeta and Vzglyad.