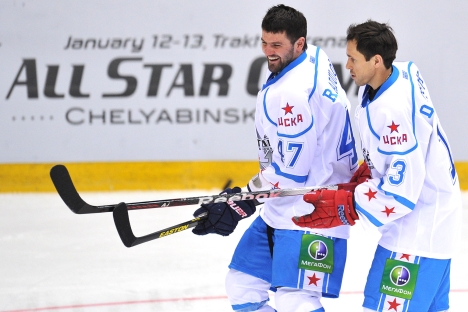 This year's meeting of the KHL's top players took place outside Moscow, in Chelyabinsk.

Chelyabinsk has been dubbed "Russian Canada": this industrial metropolis is home to one million hockey devotees, all well-versed in the sport. Chelyabinsk Hockey School is also, without a doubt, one of the best. Many of its alumni have become world champions and Olympic medalists – the names of Sergei Makarov and Vyacheslav Bykov are known across the world. The local team, Tractor, won the KHL regular championship last year for the first time in its history.

The fans got a chance to see the sport's elite out on the Chelyabinsk ice: Ilya Kovalchuk, Pavel Datsyuk, Alexander Radulov, Alexei Morozov, Sergei Mozyakin, the young, talented striker and local favorite Yevgeny Kuznetsov, plus many other famous players. In addition, the show featured the "Game of Legends," played between outstanding players of different generations, including Alexei Yashin, Sergei Fedorov, Valeri Kamensky, Alexei Kasatonov, and Alexander Kozhevnikov.

Ahead of All-Star Weekend, the vibe at Tractor's arena was electric. Some fans took pictures with their real-life heroes; others battled over a game of air hockey, and yet others snapped up souvenirs.

"There's no way I could miss such a grand – even historic – event," said Viktor Glagolev, a hockey fan with 40 years' service under his belt. "When else will I get to see so many hockey stars in one place? For me, the All-Star Game and the Game of Legends are equally fascinating. And I have no regrets about paying 5,000 rubles [about $165] per two-day ticket."

The 2013 All-Star Game aroused great interest not only in Chelyabinsk: fans from Moscow, Yekaterinburg, Omsk, Ufa, and other cities came to see the finest hockey players of past and present.

Unusually, the All-Star Game in Chelyabinsk was held over two days, as was the grand hockey show. Numerous shows and competitions were arranged to coincide with the meet. Hence the new title, "All-Star Weekend."

The hockey feast opened with the Game of Legends. To take part in the event, Vyacheslav Fetisov even interrupted his vacation.

"It took me 24 hours to get to Chelyabinsk from the Dominican Republic," said Fetisov. "I was chosen to captain the team, so how could I not be here? I'm always glad to come to Chelyabinsk. People here love and understand their hockey, and they're developing the sport nicely. Our team was more senior, and we had a tough time out on the ice. But we fought hard, and I certainty enjoyed it.”

"It is symbolic that 20-year-old Yevgeny Kuznetsov took part in the match," said Sergei Makarov. "And 67-year-old Yuri Shatalov was on Fetisov's team – it was like a roll call of generations. At 1:4 down, our opponents suddenly picked up the pace. They don't know how to lose. The match was dynamic, full of raw emotion. The result was a 4:4 tie. I hope the fans got what they came for."

At a press conference, Fetisov was asked for his thoughts on Yevgeni Malkin and Alexander Ovechkin's absence on the ice due to the end of the NHL lockout.

"I would not rush to accuse them of being unpatriotic," he said, sharing his opinion. "They have major contractual obligations in the NHL. For me, it's more revealing that they came to Russia at the first opportunity and showed grit and class in the KHL. I want to express my great respect for Kovalchuk and Datsyuk, who took the opportunity to come to Chelyabinsk."

Immediately after the All-Star Game, Ilya Kovalchuk and Pavel Datsyuk returned to their NHL clubs across the pond.

President of the KHL, Alexander Medvedev, told reporters that the league did not interfere with the NHLers' departure when the lockout finished. According to him, some wanted to stay and finish the season in the KHL, but the Russian side decided not to give the North Americans ground for litigation. Medvedev also hopes that the North American clubs will release their players for the Sochi Olympics in 2014.

After the Game of Legends, the official opening of All-Star Weekend took place, the main attraction being a colorful multimedia show. The ice arena was transformed into a blue lake: "snowflake" skaters depicted the Chelyabinsk coat of arms with a dancing version of the city's symbol (the camel), before transforming themselves into fire. The "sky" was full of snow and aerial acrobatics.

"Wonderful, the atmosphere is simply magical," said Ksenia, a Chelyabinsk fan sharing her impressions of the All-Star Game. "I still can't believe it's all happening here in Chelyabinsk."

On Dec. 12, the "Master Show" was held – a unique contest designed to show off the skills of the KHL's top exponents.

The fastest player in the league was Yevgeny Kuznetsov, who set a speed record in the history of the All-Star Games. The most powerful shot, meanwhile, for the second year running, belonged to defender Alexander Ryazantsev.

The contest between the West and East captains was won by Ilya Kovalchuk, who showed a flair for figure skating with his female partner. The competition for the best “bullet” was dominated by the peerless Pavel Datsyuk, who fired under and over the goaltender at will. Hanging spellbound in the air, the puck found its way into the net every time. The All-Stars themselves admit that, in the art of free hits, Pavel has no equal anywhere in the world.

Goalkeeper Konstantin Barulin performed two dances in the Master Show. The public was particularly impressed by his improvised bopping to rapper PSY's "Gangnam Style". The first day closed with a cheerleading contest. The winning dance came from the Chelyabinsk team.

The culmination of the festival was the match between the best players in the league. As promised by West and East captains Ilya Kovalchuk and Alexei Morozov, the match was fun and featured goals galore – a staggering 29 in total. When the gun-slinging was over, East was on top, 18:11.

In short, All-Star Weekend in Chelyabinsk hit the mark. This was confirmed by Alexander Medvedev, who praised the organization of the event and stated that the league's decision to entrust the All-Star Game to Chelyabinsk had been more than justified.