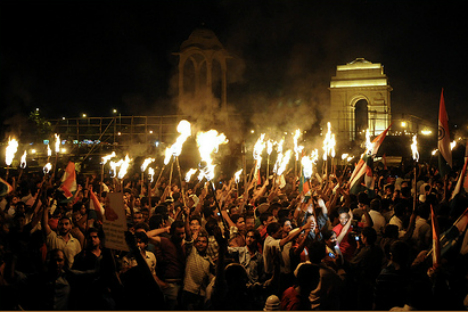 The youth of India and Pakistan are increasingly frustrated with the political elite. Source: Flickr/Mayank Khurana

The protest movements in India and Pakistan are challenging the existing political parties and are borne out of a growing sense of frustration that the established political system has become predatory and venal.

A column by former British Prime Minister Gordon Brown in the Newsweek magazine focusing on the protest movements in India and Pakistan is notable for many reasons. Britain of course is credited with special historical acumen in grasping the ebb and flow of events in its former colonies.

Again, it is a point of interest that a western statesman of high standing and immense experience in the problems of development has commented. Brown draws sweeping parallels with a “rights revolution” sweeping the Middle East and North Africa.

Curiously, he sees the protest movements as largely youth-driven in reaction to “decades of adult complacency” and “inaction”. He sizes up that the political systems as such in India and Pakistan are not under threat and in fact, under the “growing and insistent pressure from young people”, “long-delayed, long-over-due change [is] starting to happen.”

However, Brown sees a common thread running through the protests on Tahrir Square in Cairo and the Jantar Mantar in New Delhi – or the Red Zone in Islamabad. Brown attributes to globalization the credit for unleashing the “massively transformative forces.” First, globalization is characterized by the free flow of capital; second, it has led to the global sourcing of goods and services. But a third and far more potent consequence has been the new media – Internet, mobile phones, Twitter, Facebook and YouTube – which are showing the “potential to radicalize a new generation.”

Brown seems to estimate that the protests unfolding in India or Pakistan are more about social or economic inequities rather than the systemic breakdown of the existing political order. Alas, he deftly sidesteps the big question whether such profound, cataclysmic movements unleashed by the “massively transformative forces” of globalization will spare the existing the regimes or will eventually sweep them aside as has happened in Egypt. Perhaps, he is being polite.

The point is, the protest movements in India and Pakistan are also challenging the existing political parties and are borne out of a growing sense of frustration that the established political system has become predatory and venal. There Pakistani cleric Tahir-ul Qadri is essentially tapping into the vast reservoir of disillusionment that has accumulated over time.

Prem Shankar Jha has brilliantly analyzed that in India too, a flashpoint is arising, where the protest is “moving closer to the borders of revolt.”

Whereas Brown exudes an overall optimism that it is all a “movement for basic rights”, and is a progressive movement, in Jha’s opinion, the protests are by people who are “overcome by a sense of betrayal” and have lost hope that the predatory political system can change at all. He writes in a devastating tone: “Only in recent years has it begun to dawn on them that democracy has become a part of the problem and cannot therefore be part of the solution.”

In Brown’s view it is a movement for change led by the youth from the dispossessed strata of society inspired by the new media and rising expectations; but Jha sees that the “torrent of anger” knows no boundaries of age or caste and doesn’t require the Internet to enlighten them about the “denial of justice” by the venal predatory political order.

After all, where was the Internet all this while? Jha notes, “This [anger] has been apparent in the Maoist uprising that began in 2005, and has driven the state out of large parts of 83 districts in the country.”