Federal agency on orphans may be created in Russia 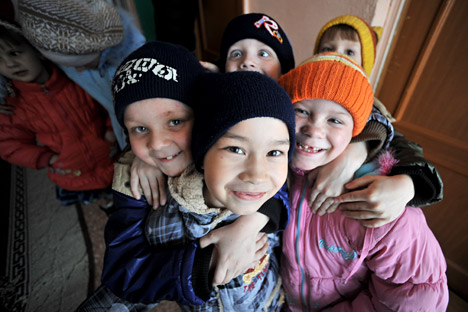 Russian authorities plan to create an agency that will be responsible for orphans and their adoptions. Source: RIA Novosti / Vladimir Pesnya

Russian State Duma wants to create an agency that will deal with orphans' problems and thier adoptions while while the country's Financial Ministry opposes this initiative.

The State Duma committee on family, women and children has proposed to create an agency in charge of orphans in Russia, Izvestia reported on Thursday.

"Committees and councils cannot resolve the current problems," Russian presidential human rights ombudsman Pavel Astakhov, who has backed the idea, told Izvestia. "The relevant committee has proposed to create a federal agency that will be in charge of orphans and resolve problems promptly"

Such agencies exist in France, Norway, and Germany, he said.

Astakhov believes Russia needs such an agency too because the authorities intend to give close attention to the issue of orphans now that Russia has adopted the Dima Yakovlev law, which prohibits U.S. citizens from adopting Russian orphans.

On December 28, 2012, Russian President Vladimir Putin signed into law the "Dima Yakovlev bill", which is Moscow's response to the U.S. Magnitsky Act. The Russian law bans Americans from adopting Russian children and suspends Moscow's participation in the Russian-U.S. adoption agreement, which was signed in Washington on July 13, 2011.

Astakhov also told Izvestiya he has suggested that the Kremlin and the government discuss the issue.

Olga Batalina, first deputy head of the State Duma committee on family, women and children, has confirmed to Izvestiya that the committee has discussed the formation of a special federal agency on orphans.

"We need to change the system of management in the sphere of child protective services, which is now poorly managed," she told the newspaper.

Batalina recalled that there is currently no unified agency in charge of orphans and these issues are handled by different agencies at different levels, including at the federal level (the Education and Science Ministry), regional level (relevant agencies), and municipal level.

In the meantime, a source in the presidential administration told Izvestia the Kremlin backs the idea.

The source said the only agency opposing this idea is the Finance Ministry, which finds it unnecessary to spend money on such an agency.

"The administration knows about the proposal made by Astakhov and the parliamentarians and some contradictions with the Finance Ministry." the source claims. "We also understand that the creation of a federal agency that can help children is more important than the Finance Ministry's saving, and therefore we are inclined to back the proposals made by the legislators and the ombudsman."

The Finance Ministry has declined to official comment on the situation to Izvestiya.

"Everything is now at the level of Astakhov's wish to create such a body, but there is no program," a Finance Ministry official told the newspaper. "For this reason, we can't talk about the Finance Ministry's official response on this issue."

"The first time I heard a proposal to create such an agency was in the State Duma," Astakhov told a press conference in the Interfax central office on Thursday. "It needs to be created, but this decision needs to be made by the president and the government."

According to him, 19 agencies are now working on orphans' issues in Russia, but this system is inefficient.

"For example, the Interior Ministry deals with children who have committed crimes, but they don's see the social roots of this phenomenon," he explains. "They only deal with law enforcement prevention, but they need to engage in social prevention. It turns out that too many cooks spoil the broth."

Astakhov said the office of the presidential ombudsman on children's rights currently fulfils this function. "We work with orphans, children with disabilities, etc. our main task is to collect information from these 19 agencies and offer our decisions," he said.

"Many countries have taken this path," Atakhov added. "They have come to understand that family at the modern stage is an organism that should not be underestimated. The foundation of a person's future is laid in the family. There was an idea to replace a unified agency on children with an interdepartmental commission on minors led by a deputy prime minister. However, this commission meets once in six months. You can't work according to such schedule."

The Russian presidential human rights ombudsman also says that the so-called Dima Yakovlev law will not be repealed regardless of the criticism.

"What has been done will not be cancelled despite the protests," he said at the press conference at the Interfax central office. "No one is going to dissolve the State Duma. Other tasks are facing the State Duma and the Russian government today. The measures that have been taken are a new reality, in which we have been living since Jan. 1, when the Dima Yakovlev law came into force."

"The visible part of the protest mostly includes rhetoric demanding the cancellation of the ban on Americans adopting Russian childre," Astakhov said. "In fact, it includes a lot of other principles that many civil society representatives find most frustrating, including a ban on funding from foreign sources."

The possibility of banning U.S. citizens from adopting Russian children was first voiced in April 2010, following the death of an adopted Russian child in the United States, Astakhov said, adding that this initiative was supported by 90 percent of Russians at that time.

"Americans used to adopt many children, although Italians and Spaniards have overtaken them in the past year," he said. "At the same time, some 50 percent of people responsible for children's deaths go unpunished."

According to Astakhov, some Russian regions do not tackle adoption issues at all.

The information in this section is provided by the Interfax news agency and is intended for personal use only. It may not be reproduced or distributed in any form without express permission from Interfax. To request permission to republish, email: ifaxru@interfax.ru.