The View from Moscow: Women’s rights in India 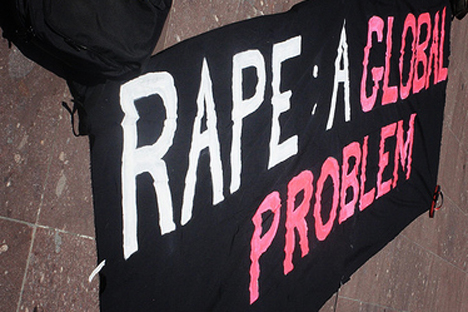 According to official reports, a woman in India is raped every 20 minutes. Source: Press Photo

Recent protests in India following a brutal gangrape of a college student in Delhi have brought the problem of rape and sexual abuse in the country into the global spotlight.

Women’s rights in India have remained in the forefront of international concern lately. Last week another woman was gang raped on a bus in India’s state of Punjab. Meanwhile, every year Indian police register thousands of rape cases. Sociologists agree that the Indian society is ill.

On January 12, a 29-year-old woman took a bus to travel home. When she asked the driver to let her get off, he refused and brought her to a desolate location. There the victim was gang raped by seven men. The next day, the suspects dropped her off at her village, where she informed her family and police. All seven rapists were arrested the same evening and admitted their guilt.

This happened less than a month after a brutal gang rape of a 23-year-old student in New Delhi. The girl died two weeks later in a Singapore hospital. The Delhi incident spurred a nationwide protest over the treatment of women in India. Meanwhile, official statistics say that in 2012 some 600 rape cases were registered in Delhi alone, while the total number of Indian women suffering sexual abuse stands at 24,000.

Expert for the Russian Institute of Strategic Studies, Boris Volkhonsky finds these figures “shocking.” He adds, “Indian women are abused not only by strangers but by their husbands, too. Not all women, however, dare to report abuse to the police- and this is a question of Indian cultural traditions. What is especially sad about all this is that some politicians, public and religious figures blame the victims.”

According to official reports, a woman in India is raped every 20 minutes. But most cases remained unknown to the public until recently. One should mention that rapists were not even barred from seeking posts in parliament. Expert for the Institute of Oriental Studies, Tatiana Shaumyan says, “Actually, there is nothing new about the situation with women’s rights abuse in India. But those incidents had been always hushed up. This is very sad. On the one hand, India has had a number of outstanding women politicians and public figures, on the other hand- Indian women continue to suffer this humiliation.”

Notably, the suspects have not been trying to conceal their crime. The authorities do not seem to be offering a really acceptable solution to the problem despite a national outcry about the Delhi brutal incident. Experts agree that the Indian society is living through a deep cultural crisis when old religious norms are dying off to be replaced by distorted modern pro-Western values.