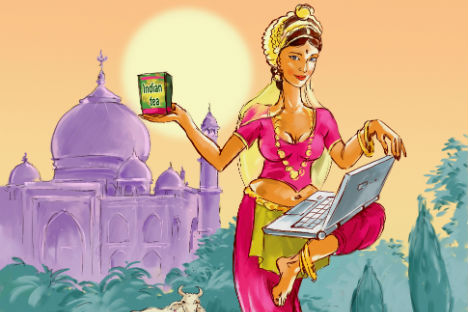 How do Russians see India? An IT power, a global player and growing economy? But strange as it may sound, exotica still colours most Russians’ views of India.

India may be one of the world’s fastest growing economies with nearly half its population living in cities, but for many Russians, India remains, first and foremost, an enticing and enigmatic land of ancient temples and exotic dance. Although many more Russians are travelling around the world, images of the "Oriental exotica" have persisted due to lack of first-hand contact. If you haven’t visited a country and interacted with its people, your picture of that place will be cluttered with clichéd images and out of sync with reality. Here is a quick lowdown on how Russians view India:

The images of Aishwarya Rai or Amitabh Bachchan look-alikes, dancing in bright clothes, may have stemmed from the way most Russians get to know India - through music and films.

So where does the cow come from? Due to heavy traffic, crossing a road in Russia, even humans often run the risk of getting hit by a vehicle, not to mention animals. "I was amazed that in India cows take precedence over cars, buses or rikshaws; a cow is the queen of the road there," Alexei, a 22-year old Russian student who has recently been to India says excitedly.


Every joke has a bit of truth

Laid-back approach isn't probably the exact word to describe many Indians who are thriving in Russia due to their business acumen, result-oriented hard work and natural instinct for adapting to a foreign culture. However, many Russians feel there is a grain of truth in this stereotype. In contrast to Russians' knack for nagging, Indians generally appear calm and relaxed. Besides, Russians who work with Indians speak about their need to take their time to think things over, as well as the Indian habit of replacing a categorical "no" with "maybe sometime in the future". My Russian friend Anna, who frequently works with Indians, says their ladback ways sometimes put her off but, “ it's good that Indians don't fret over trifles like we do.” The very idea of India being a place devoid of aggression and competitive spirit, an oasis of peacefulness in the stressed-out world, is very appealing. Probably, this is one of the reasons why so many Russians have been drawn to India like a magnet, wanting to see for themselves what it's really like.