Music within the law 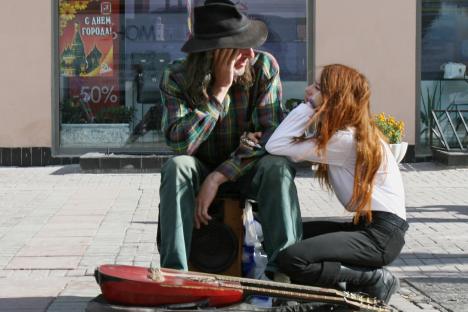 A new law may impose some restrictions on street musicians which will prevent them from performing on the streets. Source: ITAR-TASS

In its latest attempt to imitate Europe, the Russian Ministry of Culture began regulating Russian street musicians, who had until now been regulated simply by a musician’s unwritten code of honor and tentative arrangements with the local police.

It is not uncommon for street musicians to be regulated through systems that give both the musicians and the government rights and responsibilities. In both Toronto and London, once a year, the government holds several rounds of auditions, and anyone who wants to can take part. After the auditions, year-long licenses are issued that give performers permission to play and also impose obligations on them. In London there are strict limitations on the time a musician is allowed to play – no more than two hours at a time on the same spot. In Madrid, musicians risk being fined 750 euros ($975) and, worst of all, being deprived of their instruments, for playing in a place where they’re not allowed.

Izvestia reported recently that Moscow street musicians may be assigned permanent pitches in Moscow parks, citing a source in Moscow’s Department of Culture. Buskers in the Russian capital are most likely to start passing the hat legally as early as next summer.

The Department of Culture source explained that the basic necessities would be provided for musicians to enable them to perform in parks, including lighting and an electricity supply, or to put it simply, “a street lamp and a power socket.”

There are no plans to pay the performers, but as usual passers-by will be free to show their appreciation to musicians they like. Park administration bodies will select talented performers. “This is not about censorship, but about maintaining a level of quality, so that we don’t get criminal gangs’ songs, for example, being sung in the parks,” the official stressed.

A pilot program was carried out this summer in Gorky Park when Sergei Kapkov was the park’s director. Kapkov is now the head of the Department of Culture and interested in overseeing an expansion of the experiment.

Most street musicians in Moscow prefer the Metro, but according to the Moscow Metro’s press office, playing there is illegal. Musicians may apply to the Metro’s administration with a proposal to hold an event in the subway. The metro has already hosted a few concerts: the Kremlin Chamber Orchestra played twice at Kropotkinskaya station on the Night of Museums, and the Gnessin Virtuosi Chamber Orchestra staged a performance at Mayakovskaya station. But these events were planned beforehand and held outside peak hours when there were no passengers on the stations. The Metro is not ready to provide permanent places for daily concerts by street musicians.

Vladimir doesn’t see why the authorities should impose restrictions on street musicians. Before coming to Moscow he gave music classes at a Pioneers’ Center in Tambov.  “When the classes were shut down, I had to find something to do for a living,” he said. “Why do I play in the streets? Where else can I play? I’ve been a pensioner for many years now, I’m 70. I’ve been offered a job with the Veterans’ House, but the pay is peanuts, and I have children and grandchildren to support. Life’s hard on people in Tambov. First, I tried playing down in Moscow’s metro, but they would throw me out every time. They didn’t touch me in underground passages though. If policemen do approach me, however, I tell them that I’m a registered self-employed entrepreneur and pay my taxes.”

Once, I was nearly taken to the local police department – handcuffed and beaten properly. A passer-by called the Novaya Gazeta newspaper: journalists arrived, and I was released. Later on, it turned out that the police were responding to a call from the city administration – I was playing in the vicinity of its building. The caller complained that I was singing in English: ‘God knows what he’s singing about, maybe he’s insulting the authorities.’
Alexei, Voronezh

As for the buskers themselves, they are not exactly delighted with the new idea. Currently, they play without any prior approval, either avoiding the police or taking advantage of “connections.” Seasoned street musicians advise not to push for rights when dealing with law enforcement officers, since they know a few dozen absolutely legal ways to make life a real nightmare for street musicians.  “I remember an officer – I will not disclose his name – who told me that unless I cleared off from the Arbat, he would powder me with cocaine and send me to prison. When I asked him where he’d got so much cocaine, I was immediately taken to the local interior ministry department,” said Andrei, a street musician from Moscow.   According to some street artists, the fee is 500 rubles (about $15) per day to avoid being bothered.

Experienced street musicians say that with the arrival of the new mayor, the situation became harder.  City officials are seeking to remove everything unseemly from the streets, and buskers have fallen into this category, although there is no law prohibiting their activities.

I remember I was playing late one evening in Arbat, and a foreigner came up to me – a Spaniard, as it turned out. He shook my hand and asked me in bad Russian: “Could you sing ‘Fragrant bunches of white acacia’?” I started singing, and he broke into sobs and explained that this was the song his grandmother, who was of Russian descent – now long since dead – used to sing to him as a child. A nice picture we two made: a street musician in an orange robe sitting on the pavement at night singing ‘All the night, a nightingale whistled to us,’ and next to him a grand-looking gentleman sobbing. Incidentally, he gave me all the money he had on him for the song.
Oleg, Moscow

They could be called to account under the Moscow city law against disturbing the peace at night. According to this law, “actions disturbing the calm and silence during the night time include the use of… sound reproducing devices, as well as sound amplifying devices, playing on musical instruments, shouting, whistling, singing…” between 11 p.m. and 7 a.m. However, almost all street musicians pack up before 10 p.m., and they rarely use anything more than 1kW audio amplifiers which produce sounds within the volume limit permissible for city streets.

The life of a street musician in Russia is probably not very different to that of his colleagues in other countries. Sometimes, you can lose everything – or become fabulously rich – in a moment. It’s playing roulette, just like in a casino. The only difference is, you’re in the street.