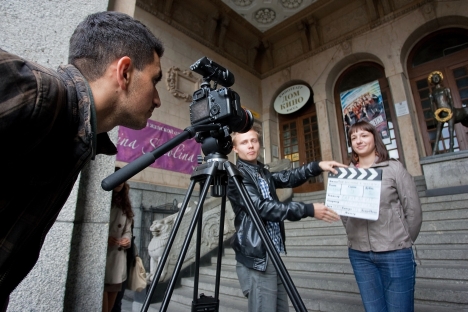 During the production of short documentaries in St. Pteresburg for the International Film Festival. The name of the film is "The Message to a Human." Source: ITAR-TASS

Twenty-four young cinematographers from 15 countries are making a month-long train journey around Russia, filming Russian stereotypes – snow, ice, wide immense landscapes, Russian women, Russian vodka, Russian bears and Russian cars. They are due back on Feb. 1, with their material already edited and ready to show at film festivals.

The Cinetrain international documentary film project has arrived in Russia. Twenty-four young filmmakers from 15 countries are making a round-trip rail journey from Moscow to Irkutsk, taking in St. Petersburg, Murmansk, Kotlas in Arkhangelsk Region and Tomsk along the way. During their trip, they will be filming short documentary pieces about Russian stereotypes – snow, ice, vodka, colossal landscapes, Russian women and Lada cars.

“The participants are all expected to film and cut their material during the trip. They’ll get back to Moscow with their films ready to screen,” said the project’s partner, Documentary Film Center DOC.

The project has been set up by Russian producer Tatiana Petrik, in collaboration with their French colleague Guillaume Protsenko. Participants will be making films entitled “Russian Women,” “Russian Sauna,” “Russian Winter,” “The Riddle of the Lada,” “Let’s drink!” and “Bears.” All of the filmmakers have to make a short movie about their allotted topic, but they will also work together on a joint film.

This is the third time around for the Cinetrain project. In 2008, the filmmakers took the Trans-Siberian Railway from Moscow to Vladivostok, and, in 2010, they made a railway journey around Central Asia.

“This time we realized that the final frontier is winter – the cold. We’re taking a huge swing across Russia by rail, from Moscow to Lake Baikal and back, taking in Murmansk, St. Petersburg and Tomsk while we’re at it,” the French producer Protsenko wrote of the project on the DOC website.

“There are just hundreds of stereotypical images of Russia, and this year our filmmakers are setting out to investigate those stereotypes. The most widespread are that people in Russia drink vodka all the time and drive Ladas; that bears wander through city centers; that Russian women all dream of marrying foreigners and are all astoundingly beautiful; and that Russians jump into ice-holes after winter saunas.

“Why are we filming about stereotypes? One reason is that it would be stupid to deny them, because they are a genuine part of the national psyche," Protsenko said. "But, on the other hand, it would be ridiculous to base our perception of a nation’s identity on stereotypes, such as the Germans liking order. But there’s far more to Germans than that, or the French eating frogs and carrying baguettes, even though a Frenchman without his baguette is still a Frenchman."

"Could Russia remain Russia without vodka or without bears? This is the question that interests us,” Protsenko added.

The Cinetrain participants were selected in open competition on the Internet. They were required to have both a degree in filmmaking and past experience at international film festivals. This year, the project had to select 25 individuals from more than 300 applicants.

“I imagine that, during the trip, I’ll meet people who might seem cold at first, but who are humane, sympathetic, wise and patient. Well, that’s what experience leads me to expect. When Russians gather around a table and lift their glasses in a toast, these are words of deep and sincere feeling. It’s actually what I lack sometimes in Switzerland – real emotions. I hope I’ll find them in Russia, as well as a great sense of humor,” Swiss director Benni Jaberg told Moskovskie Novosti.

Squaring the Circle of Life on film

“The first association that comes to mind is Yuriy Norshteyn’s ‘Hedgehog in the Fog.’ You could say that this 10-minute animated film about a little hedgehog trying to find his way home in a dense fog is a metaphor for the Russian soul itself," said Dieter Deswarte, Belgian director of “The Riddle of the Lada.”

"Its melancholy and lyricism have influenced my work a great deal. I feel that these qualities have enabled Russians to penetrate closer to the question of human nature than Westerners have managed. Yet, overall, my impression of Russia is formed from what is written and shown in Western media, which shows a corrupt and unfair country of oligarchs,” Deswarte added.

The first cinema train was headed by Soviet-era filmmaker Alexander Medvedkin in the 1930s. It toured the country with a specially equipped carriage in which film could be developed and edited. The project stopped in small Russian towns, where it filmed the lives of local people and the problems they faced.

Then, in the late 1960s, a similar kind of social documentary train operated in France – the director, Chris Marker, believed that working people needed cinema to help them protect their rights. “We are continuing that work today,” said Protsenko.

“We travel to towns both great and small, giving prominence to people who are rarely filmed and whose voice isn’t heard.”

On Feb. 1, the Cinetrain will arrive back in Moscow. The films will premiere at the Documentary Film Center DOC on Feb. 6.

The article is based on materials from RIA Novosti, Moskovskiye Novosti and the Center of Documentary Film website.