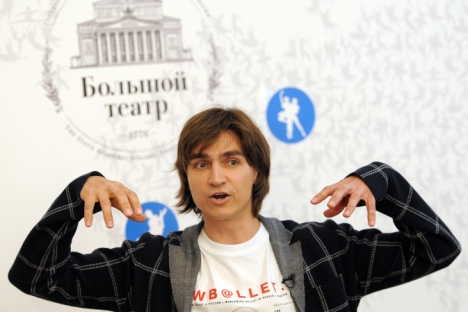 As a result of an acid attack on Jan. 17, artistic director of the Bolshoi Ballet Sergei Filin has been moved out of intensive care and doctors now describe his condition as stable. Source: ITAR-TASS

Sergei Filin begins his work with police as his condition stabilizes after surgery.

Sergei Filin, the artistic director of the Bolshoi Ballet, who was the victim of an acid attack on Jan. 17, has been moved out of intensive care and doctors now describe his condition as stable. With this upgrade, Filin can begin working with the police to find his attacker.

Vladimir Neroyev, Chief Opthamologist of the Russian Health Ministry and Director of the Helmholtz Institute of Optical Surgery, spoke to the press about Filin’s condition.

“Our institute was consulted about the burns to his eyes. Such circumstances demand both surgical and restorative treatments – everything depends on the severity of the lesions, the results of the diagnosis, and how the healing process goes. It’s a complex situation. Our priority at the present moment is to save his sight,” Neroyev said.

Yekaterina Novikova, head of the Bolshoi’s press section, addressed rumors that Filin would leave Russia for treatment in Europe in comments she gave to Komsomolskaya Pravda about Filin’s condition.

“We need to know what results the first operation can give,” Novikova said. “Specialist opthamologists will be watching the situation carefully – and will then make decisions about whether it’s necessary to fly Sergei to Belgium or not. The Belgian Military Hospital is famous for its burns center. But right now, we have to save Sergei’s eyesight. Moscow has top-flight consultants in that field.”

Novikova confirmed that the criminal investigation into the attack on Filin has intensified considerably.

“His personal email has been investigated – although nothing suspicious was found, other than some unpleasant reviews of his closest aides," she said. "Natalya Malandina and Company Manager Ruslan Pronin have already been dismissed. A fake page for Filin appeared on Facebook, including insulting reviews directed at the theater management; the artistic director had received threatening phone-calls, and his car tires were slashed by unknown individuals.”

Anatoly Isankov, the Bolshoi Theater’s General Director, told the journalists of the worries Filin had mentioned to him on the eve of the attack.

“It was just yesterday that I spoke with Filin, who told me that he felt as though he’s on the front line here," Isankov said. "I told him in reply that in fact all of us here feel as though we’re at the front. You have to understand, working in a theater is very tough, especially in his position. Of course, we knew about the threats. But no one could have expected that they might result in such a tragedy! It’s impossible to imagine who could possibly do this kind of thing…”

Burns specialist Dr. Andrei Vesyolov said that the burns Filin suffered in the acid attack could result in serious scarring, and that plastic surgery would be required over many operations in order to rectify the damage to his facial tissue.

“If it proves to be third-degree burns, then his face will be disfigured. He may need more than one artificial face process. The process of replacement could take a great time – many years,” Vseyolov said.

On Jan. 18, Russian Minister of Culture Vladimir Medinsky asked Procurator-General Yuri Chaika to put the case under special investigation. A criminal investigation into the attack on Filin has been set in motion, on the basis of “intentional causation of grievous bodily harm.”

A conviction on this charge would carry a maximum penalty of eight years imprisonment. Police believe the principle motive is connected with Filin’s professional activities, but the police do not exclude the possibility of a domestic aspect to the attack.

Filin’s colleagues have been appalled at the savagery of the incident.

“I’m completely shocked. I can’t begin to imagine what might have prompted this,” Bolshoi prima ballerina Nina Kaptsova said in an interview with RIA Novosti. “The morale in the ballet company is marvelous – I haven’t noticed any kind of unpleasantness, conflicts or intrigues. Sergei Filin is loved by everyone – he’s a very fair and reasonable man.”

Despite Kaptsova’s comments, others say that the Bolshoi ballet is a less than perfect place to work and well-known Russian choreographers recalled previous cases of threats. Makhar Vaziev, now the principal Ballet-Master of the La Scala company in Milan, Italy, said that threats were made against him when we was working in St. Petersburg.

“It’s unbelievable when the artistic director has threats made to him," he said.  "When I was made head of ballet at the Mariinsky Theater, I received threats almost on a daily basis. I really thought that those days were behind us now.”

Alexei Ratmansky, the Bolshoi Ballet’s previous artistic director, and currently choreographer of American Ballet Theatre, believes that the tragedy underscores the absence of theatrical ethics at the Bolshoi.

“This appalling incident with Sergei Filin is no coincidence," he said. "The Bolshoi is riddled with disease – the terrible cliques that drive a wedge between the performers; black-market ticket dealers and their middle-men; half-loony fans ready to gnaw out the throat of rival stars; cynical hacks, lies in the press, and tittle-tattle interviews with the staff – it’s like a huge snowball."

"The reason is the absence of any theatrical ethics – something that has eaten away at the Bolshoi for years, taking real people down with it. That’s the actual mayhem behind the scenes at our great theater,” Ratmansky added.

Sergei Filin, 42, is a People’s Artist of Russia. He joined the Bolshoi company in 1988, after graduating from the Moscow Choreography Institute. His roles as a dancer there included Prince Desire in “Sleeping Beauty,” Siegfried in “Swan Lake,” Albert in “Giselle,” the Prince in “The Nutcracker,” Romeo in “Romeo and Juliet,” and the Classical Dancer in “The Bright Stream,” along with many others. He has appeared as a Guest Artist with the English National Ballet, the Hungarian National Ballet, and the Tokyo Ballet.

As Filin approached his home late in the evening of Jan. 17, a man called out his name. When Filin turned around, the man threw acid in his face and fled. Filin was rushed into surgery at the burns center of City Hospital #36 and doctors now say that he will not be permanently blind, although it is too early to speculate about the extent of the damage to his face and eyes.

This report is compiled of materials from RIA-Novosti, Interfax, Kommersant, Komsomolskaya Pravda, lenta.ru and gazeta.ru.