The Voice of Russia
Brendan Cole 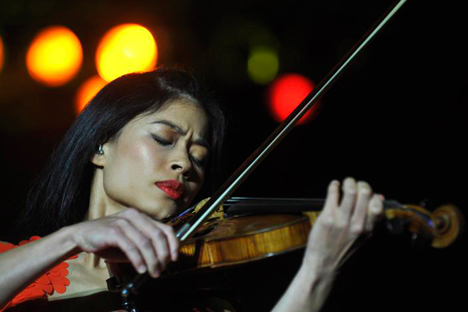 The world's most famous female violinist has announced that she's hoping to ski at the 2014 Sochi winter Olympics, where she hopes to represent Thailand.

She's a darling of the concert hall and she's sold millions of albums. But Vanessa Mae has more than one string to her famous bow. The world's most famous female violinist has announced that she's hoping to ski at the 2014 Sochi winter Olympics, where she hopes to represent Thailand. VoR correspondent spoke to her a short time ago and asked her to outline her sporting ambitions.

I’m aiming to qualify for the next Winter Olympics, so that I can represent Thailand. I came to love skiing at 4, it was about the same age that I started to play violin. I had more promised potential as a violinist, but I still managed to go skiing most of my holidays. Back in 2009 when I moved to live in Switzerland, I thought it would be great to somehow try to become a better skier. So with one year to go between now and the Olympics I hope to knuckle down to some training.

What about the training that you’re going to undergo now? Obviously, the Olympics is going to be sport at the very highest level. I presume you have a battery of coaches and nutrition advice and training advice. What’s the plan for the next year?

The thing is that I’m not going to be competing to become in the top, because they’ve been taking races since they were about 8 years old. I just hope to qualify – to get 140 points. I don’t have any illusions of being on the podium or in top-100 of the world. Just to be there would be cool. I’ve actually been training sporadically. I haven’t got a full-time coach. I’m in the middle of interviewing for one. When I return to Zermatt in a few days’ time – I’m currently in London – I’ll be training two-three days and I’m going to racing camp in Oslo for about a week, and then we’ll see what the rest of the year’s training is going to look like. But definitely the priority is to qualify.

There’s an interesting story behind that as well, because you’ll be trying to represent Thailand. Thailand doesn’t have go in for winter sports that much. You’re aiming to change that.

You know, if I were speaking about Ping-Pong or badminton, it’ll be more in tune. When I mentioned I’m to go in for Alpine skiing and slalom as well, they were like, “Ok, cool, but we can’t give you much, expect for our blessing.” So basically that’s their contribution. In terms of my heritage, as my second father is English, I’ve been British since I moved to this country, to London, but now I live in Switzerland. The fact is that I now represent Thailand, because my natural father is Thai – kind of complicated family history.

Has this made waves in Thailand and the Thai media itself?

No, I hardly go to Thailand. The last time I went there was about a year ago. So I hope to make a visit before the Olympics. But I don’t know. In the beginning it was like a secret project of mine. I wasn’t sure if I was going to go for it. But I know that someone in the Olympic Committee actually leaked it to the media. After that I don’t really know that happened. For me, at least I’m just hoping to knuckle down to some hard working. When people ask me, I say, “Yes, this is my priority for this game – to qualify.” Hopefully, we’ll see this happening.

And then, of course, you’ll be performing on the stage. You’re not concerned about injuries? Travelling on that kind of speed down mountain slopes, can affect your violinist career, can’t it?

I think that, at the end of the day, if you love something, even if it’s only your hobby and not your day job, depends on your priorities in life, but I think that you’ve got to do what you love and take the risks. I broke my elbow back in 2009, but recovered in a couple of months. So I think you should go for it, if you think it’s worth it.

If you do qualify for the Sochi Olympics, could we perhaps be seeing you during the day and maybe performing that night somewhere?

Yeah, maybe, maybe! It’ll be cool to combine the two, wouldn’t it?