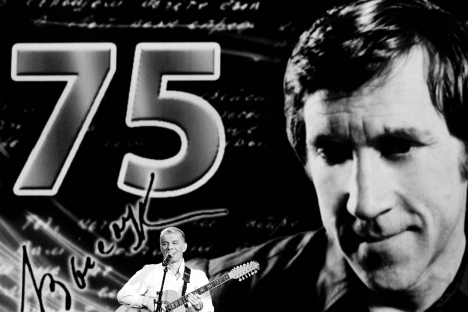 Russian artist Oleg Gazmanov performing during a tribute concert at Crocus City Hall, which commemorated what would have been the 75th birthday of Vladimir Vysotsky, Soviet prominent artist and poet. Source: Benjamin Hutter

RBTH met the son of Soviet prominent artist Vladimir Vysotsky and several other Russian performers at the Jan. 19 tribute concert at Crocus City Hall, which commemorated his 75th birthday. They talk about their memories of this timeless icon and his legacy.

His records used to be swapped under the counter in the days of the Soviet Union. Today, more than 30 years since his death in 1980, Vladimir Vysotsky continues to draw crowds in Moscow. Russia Beynd the Headlines met his son and several other Russian performers at the Jan. 19 tribute concert at Crocus City Hall, which commemorated what would have been his 75th birthday. They talk about their memories of this timeless icon and the legacy he left.

“When people ask my father what he wanted most, he would always reply: ‘I want people to remember me.’” Nikita Vysotsky did not know his father well, since he divorced and remarried the French actress Marina Vlady in 1969. Still, he has honored his father’s wishes to the letter. For what would have been his father’s 75th birthday, Nikita has brought together a sprinkling of famous performers to sing, reminisce and revive Vysotsky’s art on stage at Crocus City Hall. 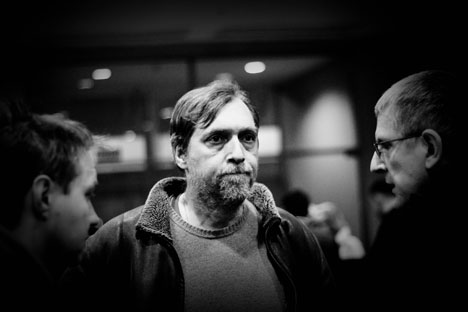 Vladimir Vysotsky made an appearance, speaking on a huge screen that dominated the Hall. Of his exceptional voice he recalled: “When I recited poetry at the age of six, my parents’ friends said that I had the voice of a real drunkard. That’s how it has always been, I never forced it. My imitators had quite a difficult task...”

He also recalled the first time he made a recording, when he was still an actor at the Taganka Theatre in Moscow: “I was with a group of performer friends and one of them wanted to record me. So we did. Then the cassette was passed around.” Vysotsky’s songs were never officially permitted in the Soviet Union; he was only recognized officially as a theatre and cinema actor.

On stage, wearing a pullover, he gave a revolutionary performance of Shakespeare’s “Hamlet,” and he made a lasting impression on the big screen with “The Meeting Place Cannot Be Changed” (1979).

“Every song is a drama”

Click here to view the text of the song

So he couldn’t make records legally. So what? “Even without posters and leaflets, everyone knew when and where his next underground concert would take place,” says actor Sergei Bezrukov, who played him in the film “Vysotsky,Thank You for Being Alive” (2011).

Vladimir Shakhrin, leader of the group Chaif, did not discover Vysotsky through the secretly made cassettes; his father used Vysotsky’s songs to help teach him how to play guitar. Shakhrin will turn 54 this year, and his group continues to fill concert venues.

“Each of his songs is like a whole drama: a piece of theatre that can be read, again and again; and each time you find new emotions, a new meaning,” says Shakhrin.

As a young man, Shakhrin worked on the construction of a new district in Yekaterinburg. His reason for doing so was that, once the work was finished, he would be allowed to live in one of the new flats. “My friends and I insisted that our street should be called Vysotsky Street, and we succeeded! I was very proud that this address was in my internal passport...” he says, smiling.

Vladimir Vysotsky was born in Moscow on January 25, 1938. In 1955, he enrolled at the Moscow Institute of Civil Engineering, but dropped out in order to attend the Moscow Art Theatre School. In the early 1960s, he recorded his first songs, which would later be heard through every window in the Soviet Union. In 1964, Vysotsky joined the Taganka Theatre, and he remained with the company until his death. He went on to star in a number of cult television shows and films, including “The Meeting Place Cannot Be Changed” and “Little Tragedies.” Vysotsky died in his sleep on July 25, 1980, presumably of a heart attack brought on by alcoholism and an addiction to morphine.

By way of summing up, Shakhrin makes an interesting comparison: “Europe had its Beatlemania. We didn’t have the Beatles at that time – but we did have Vysotsky.”

Ilja “Chjort” (a devil) Knabengof, leader of the group Pilot, was not around when Vysotsky was alive. Nevertheless, Vysotsky’s legacy is crucial for him, as well. “Through his attitude and his deep, intellectual lyrics, he created Russian rock in the way it exists today. Vysotsky was the first Russian rocker,” says Knabengof.

Vysotsky’s legacy is so profound that some see him as untouchable in terms of the heights he reached. “There is a big gap in Russian song. People are wasting their time trying to say yet again something that Vysotsky shouted out loud long ago,” says singer Elena Kamburova, founder of the Moscow Theatre of Music and Poetry. On stage, her repertoire includes songs by Vysotsky and Jacques Brel, whom she considers to be Vysotsky’s spiritual brother.

The audience is also enchanted by this legacy. The greying heads of those who were the singer’s contemporaries can be counted on the fingers of one hand among his fans. This jubilee was attended by thousands of Muscovites, offering Vysotsky that which he desired above all else during his lifetime – immortality.