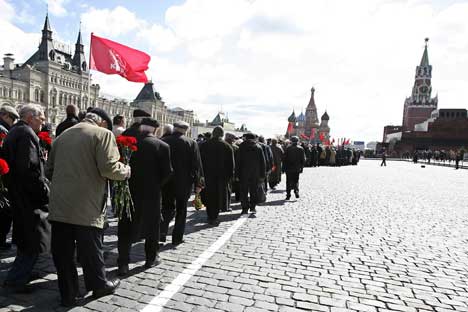 Right now, an increasing majority of Russians want Lenin’s remains to be given a proper burial.

Let’s call her Valentina Petrovna. Standing with her bundle of red carnations, she looked at me, a little indignant, and said, “I’m here to lay flowers at Lenin’s monument, of course. The Mausoleum is closed.”

For the 89 years since Lenin died, enough has been said of his religious cult and of the priests of that cult. Yet I don’t think enough ever will be said, or understood, about the acolytes whose dues to Lenin have become habit.

It was Jan. 21, a little before 11 a.m., when the Communist Party had planned to hold its annual commemoration of Vladimir Lenin’s death. Normally it did this on the Red Square – but the Mausoleum, that modernist ziggurat temple in front of the Kremlin holding the preserved remains of the “leader of the world proletariat,” was under reconstruction. Therefore, about 50 people, most of them elderly, were milling around Lenin’s monument on Kaluzhskaya Ploshchad.

Even though Valentina Petrovna said she knew that Communist Party top brass were due to show up after 11, she didn’t really care that much – laying flowers at either his sarcophagus or his monument seemed more of a religious act than a political one. “I lay flowers every year, for Lenin and Stalin,” she said with the kind of self-righteousness I’d often hear from a God-fearing Baptist, proud that he, unlike us liberals, goes to church every Sunday.

Right now, an increasing majority of Russians want Lenin’s remains (and according to experts, only about 10 percent of the actual body of the Communist leader remains in the Mausoleum) to be given a proper burial. Only 28 percent want his body to remain on display, according to an April 2012 poll. But if he were buried, I don’t think things would change much for those who have been paying their dues all their lives – if one church is destroyed, another will be erected in its place.

Nearly a century after his death, Lenin remains a polarizing figure

Before becoming the current culture minister, Vladimir Medinsky said there was something pagan and necrophilic about having Lenin’s body on view. But Lenin’s niece, Olga Ulyanova, an avid proponent of keeping the body where it is, maintains that he’s buried according to Christian tradition (his coffin is technically 3 meters below ground, she said in a 2008 interview).

Whichever way you look at it, the religious, cult-like quality of Lenin commemoration stands out, right down to the Christian parallels. Any new cult, after all, absorbs the habits of the old, much like early Christians redirected certain pagan practices toward new saints.

It’s still hard to call what brought Valentina Petrovna out to Kaluzhskaya “worship.” The substance of what Lenin achieved, the ideology, politics, the death and destruction, is of secondary importance to someone like her (on another level, death and destruction help maintain a necessary sense of religious awe).

Laying flowers is a matter of habit and tradition. It also has powerful elements of community, and I fear only someone deeply out of touch with fellow human beings could brush away that aspect of organised religion as the “opiate of the masses.” Take away one habit by force, another will emerge. Toss out your toddler’s pacifier when he’s not ready, and he will suck his thumb for years.

It’s far too easy to dismiss a historic generation and its superstitions, as if when they’re gone they will take their cults and superstitions with them. They won’t. In Lenin’s case, I’ve heard his supporters and avid Communists say that he should be buried – and while this is probably the right thing to do, it won’t end the habit of paying tribute, because it’s a habit that’s as old as life itself.