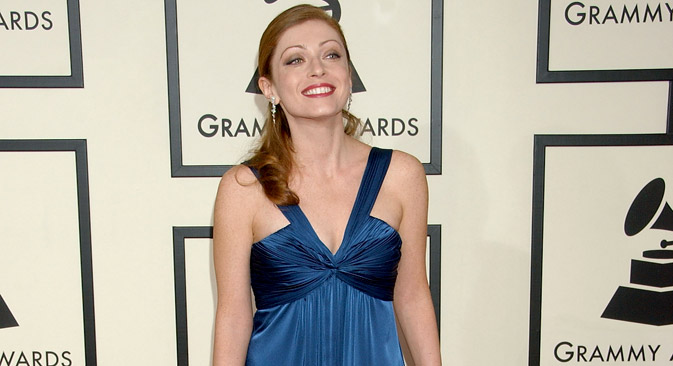 Born in the Soviet Union, the Armenian Jewish Khitruk (now an American) traverses national and ethnic identities with fluid ease. One thing is clear, though – her femininity defines her music. Source: Getty Images / Photobank.

Khitruk, who performed at Carnegie Hall January 28, discovered the sound and the works that makes her one of a kind.

January 28th, violinist Anastasia Khitruk performed several chaconnes, musical compositions from the Baroque era, at New York’s iconic Carnegie Hall. The artist has carved out a niche for herself as a performer of forgotten works both old and new, and this evening features music from the 17th century to a world premiere by American composer Michael Colina.

“I play so many pieces I have never heard before [because] then I am forced out of my comfort zone. It’s nice to have self-discipline, but it’s better to have discipline imposed upon you,” Khitruk said. “As a performer, you cannot do the same thing the same way; you have to keep surprising yourself.”

Trapped in a Nightmare

The Grammy-nominated artist’s first release consisted of Brahms’ violin sonatas. But she was discouraged by the fact that there were already so many recordings of Brahms. That pushed her into delving into new or forgotten music. Khitruk loves digging into old sheet music in music stores and in the process found music by Ivan Khandoshkin, a violinist and composer from Catherine the Great’s time. She has also recorded works by Léon de Saint-Lubin, a contemporary of German composer Felix Mendelssohn.

Seated in the living room of her Upper West Side one-bedroom apartment, Anastasia Khitruk stares intensely at her interviewer with her heavy-lidded green eyes, appearing both frank and a little curious. The enviable apartment (it is not large but has a small balcony, very high ceilings, a loft and even a small fireplace) looks immaculate and ready for a photo shoot. The most personal touch is the untidy stacks of books filling up every windowsill. “I think I was born old. I was never young, never knew what toys were for. I was always reading,” she explained.

Born in the Soviet Union, the Armenian Jewish Khitruk (now an American) traverses national and ethnic identities with fluid ease. One thing is clear, though – her femininity defines her music.

Her latest recording released in November 2012, a collaboration with composer Colina, features “Baba Yaga,” a fantasia for violin with orchestra. Khitruk had been collaborating with the Grammy-winning composer for seven years, and the two started discussing mythology one day.

Colina was particularly taken by the story of Baba Yaga, the witch-like character who flies around in a mortar, wields a pestle and lives in a hut standing on three chicken legs. Yet, as the old Russian fairy tale goes, Baba Yaga is not just a big bad witch; she gives Vasalisa several tasks to complete, and when the girl does them to her satisfaction, she helps her win against her malicious stepmother.

Colina’s “Baba Yaga” is a portrayal of the relationship between two different types of women and the different powers they have. Khitruk’s performance emanates these contrasting aspects of femininity throughout. She brings womanly richness, fecundity and a sense of female potency to Colina’s Latin-infused music.

The power of femininity is one she herself is strongly aware of. Her unexpected conducting debut was in France– it was only when she got to the rehearsal that she realized that she was not only the soloist but the conductor as well, and the orchestra ignored her directions completely. She had to give her instructions to the concertmaster; only then would do what he said.

“I used to be a huge feminist and I was furious. How dare they, I thought. Then I realized something. If you are a woman of childbearing age, you are given the greatest power in the world. You get to decide who gets to reproduce. It would be unfair to want more power on top of that. You are literally the arbiter of the future of the human race.” Thus she made peace with herself and the orchestra’s snobbery and sexism.

Classical music is still a very sexist world – the vast majority of the repertoire has been written by male composers; there are still more male soloists than female; and until 1997 the Vienna Philharmonic Orchestra (arguably one of the best orchestras in the world) did not allow women to become full members. There are famous female violinists, but most have as much steel and power in them as any man.

Khitruk, however, fully embraces her femininity and it is revealed in her playing as a maiden’s song, soaring and melodious.

A daughter of pianists, Khitruk begged for a violin for a long time until her mother gave up and took the five-year-old to a violin professor at the Central Music School, the elite school where musically gifted children were sent. The teacher looked at the child’s hands and said, “she can’t become a violinist, her pinky is not long enough.” Her fifth fingertip did not even reach the last joint of the fourth.

For a violinist whose left pinky has to be able to reach far, that was clearly a great disadvantage. “But look,” she said, pressing her hands together and holding them up before my face. “I grew it – I got it done!” The pinky on her left hand is considerably longer than the one on the right. “I really wanted to play the violin – you do what you need to do! I very rarely want anything, but when I do…” she smiled knowingly. “I always get it done.”п

After she moved with her parents to New York when she was six, she gave up the violin for a few years and decided to become an anthropologist. As luck would have it, when she was 13, her old violin teacher from Moscow not only moved to the U.S., but moved into the same building, taking an apartment one floor beneath Khitruk’s: She started playing again. Eventually she came to be noticed by famed violin pedagogue Dorothy DeLay, the mentor of dozens of famous violinists.

Always an overachiever, Khitruk strove to please, but instead of pursuing the image and sound in her own head, she was pursuing DeLay’s. “After a while, I was in Julliard with a scholarship and all, the famous student of the famous teacher, but I was crying all the time.” She practiced and cried from misery, until she couldn’t stand it any longer and went back to her first teacher, who had moved to Boston.

“That was like going back to Russia for me. And we started out again from scratch to get the right sound. Americans like a very straight and even sound. For me this was profoundly inorganic. In Russia, the sound of a violin breathes, and it has a tear in it.”