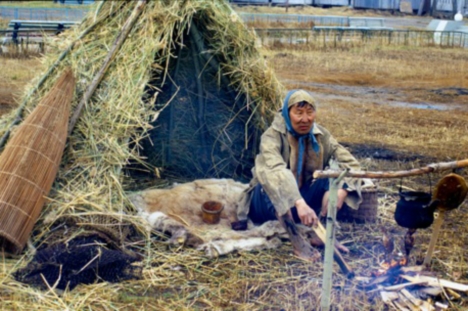 One of Russia’s most remote cities, Yakutsk has much to offer the intrepid traveler.

Yakutsk is one of the most distant of Russia’s cities, a strategic outpost in a region of permafrost and intense cold. It is the capital of the Republic of Sakha – also known as Yakutia—the largest territorial division in the Russian Federation. From Moscow it is almost 3,100 miles by air and nearly 5,000 miles by land.

Yakutsk is located on the left, or west, bank of the Lena, one of Siberia’s three mighty rivers (The others are the Ob and the Yenisei). Arriving by plane, one is greeted with an unforgettable, awe-inspiring view of the vastness of the Lena.

Despite the isolation of Yakutsk and the severity of its climate, there are many reasons to explain the city’s steady growth: diamonds, gold, oil, are just a few. With its suburbs, Yakutsk now has almost 300,000 inhabitants, or roughly a third of the Sakha Republic’s population.

The Yakuts, who now number almost half a million, are a Turkic people who migrated to their current lands from the Lake Baikal region. Indigenous Yakut culture has traditionally been based on the spiritual authority of the shaman. Yakut culture possesses a distinctive crafts tradition and a remarkably beautiful musical heritage, particularly in song. The reindeer is an important part of their landscape, as is a small but sturdy breed of local horse.

Yakutsk is officially considered to have originated with a fort established in September 1632 by  Peter Beketov, who had been given command of 30 cossacks in Yeniseisk , the “capital”  of east Siberia. Moscow's representative in Yeniseisk ordered Beketov to establish a Russian presence on the Lena River, the next great Siberian waterway to the east of the Yenisei River.

The small outpost that Beketov built rapidly expanded, particularly since early relations with the Yakuts were turbulent. Heavy Russian demands for tribute payments in furs led to discontent and uprisings in the 1630s and again in 1642, which were brutally suppressed. The year 1632 is celebrated not only as the founding date of the city, but also of Sakha/Yakutia as a territory.

View the Gallery: Ice, bone carving, strogaina and other treasures of Yakutia

Beketov’s original fort was situated about 40 miles south of Yakutsk’s current location. Ten years after its founding, the settlement was relocated to its current site in the Tuimaada Valley, and the new fort was considerably expanded. One of its original log towers survived until the beginning of this century, and it has now been reconstructed.

During the tsarist regime, Yakutsk served as the administrative center of a vast territory and as the headquarters of the Yakutsk Cossacks. The Russian Orthodox Church also had a strong presence that is being actively revived today. By the19th century, most Yakuts had converted to Russian Orthodoxy.

Like settlements throughout Siberia, Yakutsk had a grim reputation as a place of exile for political prisoners, including many of Polish nationality. To this day there is a Roman Catholic mission supported in part by residents of Polish descent.

In the early 20th century Yakutsk experienced significant progress, primarily under the capable governorship of Ivan Kraft, son of a Polish exile. Between 1907-1913 Kraft oversaw improvements both in the town and in the surrounding agriculture.

Most of the town’s historic architecture dates from the turn of the 20th century – this includes banks, churches and administrative buildings, as well as houses. The majority of these buildings were built of logs, a durable material but one needing constant maintenance because of the periodic melting of the upper layer of permafrost.

The discovery of gold at several places along the Lena River further stimulated development in the area. Extremely harsh working conditions in the Lena goldfields led to labor unrest in the spring of 1912 and a subsequent massacre of protesters by government troops in which hundreds were killed and wounded.

After the revolution of 1917, Yakutsk became the capital of the Yakut Autonomous Soviet Socialist Republic. The area’s industrial base grew, particularly in gold mining, but at the cost of much GULAG labor. During World War II, Yakutsk served as a major point in the Lend-Lease program for ferrying American airplanes to the Soviet Union—the so-called Alaska-Siberia air bridge. In the late 1950s, diamonds became a prominent source of the region’s wealth.

In recent decades, Yakutsk has experienced major development, reflected in the many new high-tech buildings throughout the city, from administrative buildings, banks and shopping centers to university buildings and hospitals. Economic growth has resulted in a growing population with a high proportion of young people attracted by opportunities for higher education.

ifficulties remain, however, especially with infrastructure development in a complex permafrost zone. Summer thaws lead to problems with wastewater disposal, streets are often poorly maintained, and housing needs constant repair. Yet the strategic importance and wealth of Yakutsk instills confidence that these problems will be addressed.

Perhaps the best illustration of the city’s challenges is the trouble involved in getting there. At present, air travel is the only reliable year-round means of transportation, and a large modern terminal recently opened. But the city’s active river port is only useful for the brief months between the spring thaw and fall freeze.

As for land routes, Yakutsk is more or less connected to the rest of Russia by the Lena Highway, which extends south some 750 miles to the town of Never on the TransSiberian Railway. To say that the road is primitive and dangerous is an understatement, although it is reasonably passable during the months of winter freeze.

There is, however, hope for a solution. Construction of the Amur-Yakutsk Railroad  (AYaM, for short), which began in 1985, is almost complete to the vicinity of Yakutsk, despite enormous difficulties presented by the terrain. (The rail link begins at Tynda, on the Baikal-Amur Mainline, or BAM.)

The rail line and the automobile road, however, are on the east bank, and in the entire Sakha Republic there is no permanent bridge over the tempestuous Lena River, which periodically floods in the spring. Discussions continue as to the optimal location for a dual purpose rail-auto bridge. In the meantime much of the rail line already carries freight and passenger traffic.

In view of the distances involved, these challenges with the overland route have relatively little impact on tourism. Most visitors will in any event choose to arrive by air. A non-stop flight from Moscow, for example, is seven hours. The length of the journey will be amply rewarded with memorable experiences of the cultural heritage of Yakutsk, as well as vistas of the boundless landscape and the deep blue of the vast Lena River.