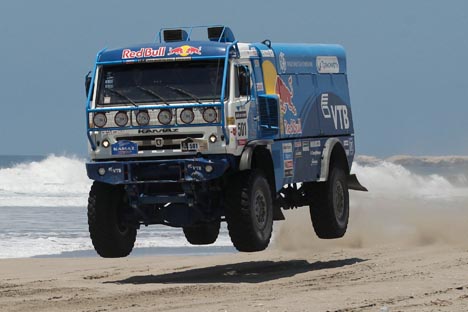 The next generation of KAMAZ trucks drivers celebrated the team’s 25th anniversary in style.

The new Dakar trucks division champion, Eduard Nikolaev, was left speechless after crossing the finish line in Santiago; he had trouble stringing together any kind of answer for reporters and wept like a baby, unable to calm down. Yakubov gave him a fatherly hug: “I’m so happy for you! Don’t cry – although I did cry myself when I won my first Dakar race – you made it!”

“I had no doubts that they would finish first,” Yakubov said. “It’s quite natural and predictable that they did. He even finished a bit earlier than we had expected, and team manager Vladimir Chagin should be given the credit for this. He’s been working with the guys all year, and now you can see the result! He was with them though the entire race, so this is his success.”

Nikolaev did not win a single stage, but he had the best overall result. He wasted no time on the track and drove at his own pace, being careful not to overexert himself or the truck. It was a smart tactic that won him the Dakar trophy for the first time.

Ayrat Mardeev, son of the famous KAMAZ driver Ilgizar Mardeev, could not believe his success either; he came in second place on the podium. His father had accompanied the team in a fast support car during the race. Ilgizar came in 14th place, but, having sacrificed time in order to help his teammates come in first, it was his victory too.

“It’s like I’m flying right now,” Vladimir Chagin said, trying to describe his feelings after the team’s performance. “We never expected anything like this. We had a rough start to the race and weren’t even thinking about a top-three finish. It would have been a real achievement to get just one of our guys onto the podium. But the lads dug in and never let go of their positions. The mechanics were just incredible, working all through the night, every night, to get the trucks ready – the trucks that brought us victory. I’m happy that we not only met the expectation of our fans, but even exceeded them.”

When Andrei Karginov’s KAMAZ truck crossed the finish line, the entire team was shocked. When it came to a halt, the vehicle collapsed on its side. Karginov completed the rally on three wheels and could not even remember where he had lost the fourth. Yakubov prompted everyone to applaud the winner of the “Bronze Bedouin,” while Andrei remained unaware that he had managed to snatch bronze from the Dutchman, Gerard de Rooy. “Andrei, relax! It’s all over, you won,” his teammates yelled at him.

It was an unusually close finish for third place this year. The bronze winner was only decided in the final miles of the rally. There were obvious favorites for the gold and silver medals before the final stages of the race (Nikolaev needed to go smoothly with no breakdowns, and Ayrat Mardeev had to pick up the pace a little), but Karginov’s bronze was most definitely hard-won. It turned out that Karginov’s tire had burst 5.5 miles away from the finish line, but he decided to keep going without it.

Karginov lost his mirrors as well, so he could not see what was happening behind him, where de Rooy was making a final push to take a least third place away from the Russians. But this was not to be: Karginov’s truck seemed to grow a pair of wings at exactly the right moment. “I was pushing so hard on the gas that I’ve got an enormous blister on my foot,” Andrei said afterward.

In addition to Karginov’s tire and mirror troubles, other things did not go as smoothly as they seemed for KAMAZ. For example, the team’s heavy support truck broke down during one of the stages.

“The breakdown made at least half of the KAMAZ team feel what real Dakar is all about,” the team’s spokesperson, Erik Khairullin, said. “Their personal stuff, the tents and the sleeping bags were left in Farit Badretdinov’s truck, which was sent to tow the broken support truck to the bivouac in Arica.” Thus, a 26-ton truck, plus 24 tons of the broken KAMAZ, had to cover 186 miles of serpentines in the Andes. The truck only caught up with the rest of the team on the morning of Jan. 10.

The situation was further aggravated by the fact that, once they crossed the Chilean border, they entered a new time zone and lost two hours of precious sleep. Those who managed to get some shut-eye that night simply fell on the ground and covered themselves with whatever they could find. Comfort was out of the question that night. The team veterans were smiling when they saw the picture: “This is real Dakar!”