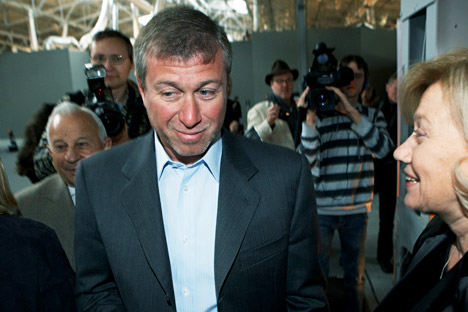 The collection of Kabakov’s works purchased by Abramovich had been assembled over the course of the last two decades by the American collector John L. Stewart. Source: PhotoXPress.

Roman Abramovich recently purchased one of the largest and most comprehensive collections of artwork by the Russian artist Ilya Kabakov – widely considered one of the founders of Russian contemporary art and originator of the Moscow Conceptualist School. The collection, rumored to be worth $60 million, was assembled by American collector John L. Stewart.

Russian billionaire Roman Abramovich and his girlfriend Darya Zhukova (founder of the Garage Center for Contemporary Culture in Moscow) have purchased approximately 40 pieces of art by Ilya Kabakov. Kabakov’s work is among the most expensive of all living Russian artists, and the pieces involved were formerly titled albums and installations, Bloomberg reports.

Today, Ilya Kabakov resides in New York and is considered to have been one of the originators of the “Moscow Conceptualist School.” His surname is included among others on the list of founding figures of Russian contemporary art. Kabakov’s work can be found in the top galleries of Russia, Europe and the United States.

When his painting “Beetle” went under the hammer in 2008 at Phillips de Pury & Co for $5.8 million, Kabakov earned the unofficial title of the most expensive living Russian artist – a title that remains to this day.

Kabakov: The man who flew into space from his apartment

The Garage Center: From Soviet landscape to Japanese-style pavilions

The collection of Kabakov’s works purchased by Abramovich had been assembled over the course of the last two decades by the American collector John L. Stewart. The price paid for the collection is not officially known, but experts believe that around $60 million changed hands.

According to Kabakov’s wife and artistic collaborator, Emilia, this constitutes one of the largest and most representative collections of his work in the world, consisting primarily of work he completed before leaving Moscow for New York in 1987. This aspect lends particular historic significance to the collection.

One of the most intriguing and engrossing elements of the collection is the assortment of albums Kabakov created during 1968-1975. Such albums became a recognized art-form among the Moscow Conceptualist School, as well as a valuable genre of artistic practice. In a word, the genre was founded by Ilya Kabakov. Kabakov’s album-works present a series consisting of several dozen pages of graphic illustrations accompanied by text, some descriptive, others ironic or philosophical. His most well-known album cycle is probably “Ten Characters” (1970–75) – two albums which were exhibited at the Pompidou Centre in Paris. Some sections of this work are represented in the collection acquired by Abramovich.

This purchase is by no means Abramovich’s first venture into the art world. The businessman is also known to have bought Francis Bacon’s “Triptych” (sold at Sotheby's for $86.3 million), “Benefits Supervisor Sleeping” by Lucian Freud (sold at Christie’s for $33.6 million), and Alberto Giacometti's sculpture “Femme de Venise I” (sold at Art Bazel for $15 million).