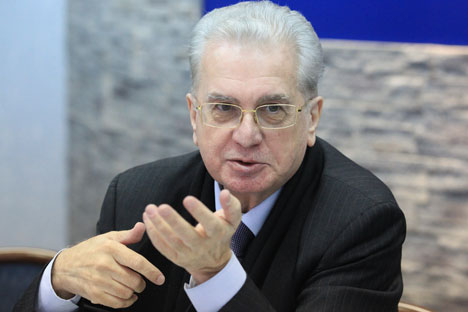 We need a special agreement, a special-regime law for exhibitions between Russia and the United States. We’re working on it. Source: Arkady Kolybalov

Mikhail Piotrovsky, director of the State Hermitage Museum in St. Petersburg and chairman of the Council of Museums of Russia, recently sat down with the editors of Rossiyskaya Gazeta to discuss criteria for judging the effectiveness of museums, the heads of museums, and the current catastrophe in Russian-American museum relations.

Russia Beyond the Headlines(RBTH): You’ve just returned from the Davos Forum. What did you do there?

Mikhail Piotrovsky (M.P.): There was a round table on The Economics of Culture. Taking part in it were the director of the Metropolitan Museum in New York, the director of the British Museum, the director of all the museums in Berlin, the general director of the International Union of Museums, and the director of the Florentine Opera. We presented projects that can help one survive in this era of crisis. We think that the Hermitage helped Petersburg pull through the crisis, while the project “The Great Hermitage” [a museum complex with a wing devoted to 20th-century art and contemporary art] is helping Petersburg to be a global city.

There was also a round table devoted to encyclopedic museums. We discussed their role in the world today for cultural dialogue. And of course we touched on questions of restitution. This coincided with the publication in the New York Times of a very good article, in my opinion, that said: American museums should stop giving back various antiquities to the Italians and Greeks without court rulings.

RBTH: Did you discuss the Schneerson Collection?

M.P.: With Schneerson we’re at a complete impasse. At first we were planning to write a joint letter to Hillary Clinton. But it’s useless to write a letter now, after the ruling by a federal judge [obliging Russia to pay fines of $50,000 for every day of delay in returning the collection].

RBTH: Do you have any works on loan now in America? Do you worry that they might be seized and held as ransom in the dispute?

M.P.: There’s never been anything like this in the history of Russian-American relations. For two years in a row: zero in the way of museum exchanges. To date, there has been only one similar incident: the Americans canceled an exhibition from Russian museums when we went into Afghanistan. Otherwise, good relations or bad, everyone traveled. Now nothing is happening.

RBTH: What prospects do you see?

M.P.: I think that all decisions about such things should be taken by only one organ — the State Duma. But this is not our concern. Our concern is exhibitions. The United States adopted a law that prohibits seizures. It was adopted specially for a show of Scythian art from the Soviet Union. It became a model. If in the register it says that such and such an exhibition is useful for the United States and non-commercial, then it is protected from seizures by the ruling. A court may make any decision, but it can’t seize anything. This is a law that truly works. When they wanted to seize a work from Moscow’s Pushkin Museum, the action was thrown out of court.

But in the case of Schneerson, we have to do, unfortunately, with a religious organization. And they are especially strong not only in Russia. On the basis of the law, the Ministry of Culture will not allow an exhibition to go to any country without guarantee of its prompt return. The United States cannot give us any such guarantee. They say that they don’t have to give us that guarantee since there is a law. But if everything is in order, give it to us on the basis of the law. We need a special agreement, a special-regime law for exhibitions between Russia and the United States. We’re working on it.

RBTH: What is your position on the matter of restitution?

M.P.: Our position is absolutely clear: we don’t need to transfer or return anything. It is all collected in a large world museum. This is a special category of museum for cultural dialogue. The British museums, the museums in Berlin are literally groaning. In Egypt… the Islamists won and they don’t care a bit about Egyptian antiquities. That’s why the conflict with the British museums and the Berlin museums is not so acute. But there are the Turks, for example… It’s a Pandora’s Box better left unopened.

Right now everyone is demanding [restitution]. Everywhere this is about property. We are forever confusing cultural values with a sense of property. The same thing happened with the Hasideans. This is not about cultural values — the Schneerson library is accessible, you can pray there. The Greeks are always demanding that we give them back their valuables, give them back, and now Greek cities are demanding this as well: “Give us back from the central Athens museum all our archeological valuables.”

Churches are demanding that paintings from the Uffizi [in Florence] be returned to them. There was big argument about Giotto. Then tourists will come there. Unfortunately, the argument “let the tourists come” is often at the root of these conversations.

RBTH: Museums today are increasingly on the battlefield, and not only international ones. Whyisthat?

M.P.: Museums are on the front lines of the fight for culture, of good with evil — in any case, of the fight against platitudes and primitiveness. Vandals threw a bottle with quotes from the Bible through a window in the Nabokov Museum, then scrawled on the wall: “pedophile.” There are other scandals involving the Erart Museum, the Museum of Contemporary Art, the Hermitage, and Vinzavod. Museums seriously irritate all those in disguise, of whom there are very many today: pseudo-antifascists, pseudo Cossacks, pseudo Orthodox Christians, pseudo Hasideans, and so on. It is an important aspect of our virtual world that a museum is a very genuine thing.

RBTH: There has been a lot of talk lately about the change in leadership at the Kizhi museum-preserve. Does a modern museum today need a manager or a professional curator?

M.P.: I havealways said that a museum needs not a manager, but a scholar. This is a typical point of view for Europe; in America they may think otherwise. My position is that the person we now call a “manager” used to be called a “party worker.” This is a person who supposedly knows how to work with people and can do anything. But, as we know, that is not usually the case, especially in museums. Moreover, it’s very important that Kizhi is a UNESCO monument. An increase in the tourist flow will trample it. Kizhi is a place where you can’t build anything. At the same time, Kizhi is a very effective museum. In 2011, the museum community named it the best museum in Russia.

You can’t judge a museum’s effectiveness by the number of visitors alone. If you do that, our museums will be looked at like Disneyland. In that case, we’ll go the route of Egypt: there’s a museum, there’s the Valley of the Kings into which tourists flow, and virtually everything else exists to serve that flow. For the local social context, a museum is a place to pump the tourist flow, which often does not care at all what it is shown.

We recently discussed various goals of museums. The International Council of Museums was here. The director of the Louvre said something important: a museum must have attendance as one of its goals. When they built the Louvre, they were thinking in terms of 3 million visitors. Now they have more and people feel crowded. But things like that have to be planned in advance.

Another very important thing is the influence of museums on what surrounds them. It is a museum in a city, in a country, in the world. The annual report of the British Museum looks like this: museum, museum in London, museum in Great Britain, museum in the world. I think in roughly the same terms.

RBTH: Can there be common criteria for judging the effectiveness of the Hermitage and, say, a small museum in the Vladimir region?

I think we talk about not the “effectiveness,” but the “success” of a museum. The assessments should be made by experts. We have various prizes and competitions; and our Inter-museum Exhibition takes place every year. One’s own community is always the most jealous.