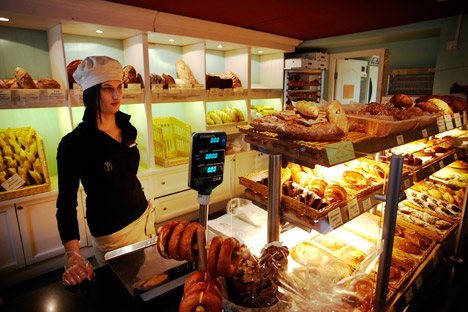 Foreign journalists who come to work in the Russian capital often ask us, as colleagues, the same question: “Where can you buy good bread in Moscow?” In search of an answer, Russia Beyond the Headlines visited several of the city’s most popular bakeries.

Paul only opened its bakeries in Russia in early 2012. For the moment, this famous French firm is content with having only two outlets in Moscow and is not considering developing them elsewhere. All of the bread sold at Paul is made from flour directly imported from France.

All photos by Antonio Fragoso

“Only these two sorts of our bread are made using Russian flour,” says the sales manager, a young blonde wearing a chef’s hat, “the rye bread ($1.95) and the nareznoy bread ($1.65).”

Maison Paul has just introduced organic breads into its range, and these novelties are flying off the shelves. The prices are virtually the same as in the Paul bakeries in France.

Our choice: The tortano organic bread made with honey and potato flakes. It is round and slightly sticky, with a soft, smooth crumb. ($6.50)

The Volkonsky bakeries are part of the firm owned by Eric Kayser, as shown in the oval logo of these Russian bakeries. In addition to standard fare such as the French flûte or the ciabatta, Volkonsky offers monge, whole-wheat and mixed grain baguettes, as well as traditional Russian breads in French style, such as the paline baguette that contains buckwheat flour.

The only downside is that the prices for these different sorts of bread are very high. For example, a baranka (a Russian specialty consisting of a ring-shaped bun made with wheat flour and sugar, sprinkled with poppy seeds) costs 79 rubles ($2.60).

The bakery also offers a “bread of the day,” each type baked only once a week. For example, on Wednesdays the special is bread baked with goat cheese and tomato, while on Saturdays it is bread made with bacon and prunes.

Our choice: The paline baguette made with buckwheat flour has an aerated crumb and a crisp crust ($3.99).

In this bakery, two long shelves are filled with all kinds of bread. “The top shelves contain the breads risen with commercial yeast; those below them are breads risen with sourdoughs,” says the shop assistant. The prices are reasonable: filippovski, a rye bread flavored with coriander, costs 70 rubles ($2.30) and small buns with dried fruit cost 25 rubles ($0.85).

Our choice: Detox bread with activated charcoal and raisins. The crumb is nearly as black as ink, due to the charcoal used in the dough ($3.30).

The Khleb &Co bakery chain, which is owned by the Russian restaurateur Stepan Mikhalkov, was founded in Russia in 2008. Khleb & Co bakeries offer 40 types of bread made from different flours at prices ranging from 40 to 300 rubles ($1.30-10.00). Their strong point, however, is their range of traditional Russian bread, pastries and cakes. Here you can find the famous kalatch (white bread braided or shaped like a padlock) and karavai (round ritual bread decorated with dough figurines, made mainly for weddings).

Our choice: The ring-shaped whole-wheat bread with plums and a dense but light crumb ($6.50).

This little establishment on Nikitsky Boulevard is one of the rare examples of a unique artisan bakery that is not part of a chain. It is famous not just for its flamboyant interior, with its intense turquoise walls, but also for the bread made by the young French baker according to French recipes. The shelves are stocked with buckwheat flour baguettes ($2.50), sourdough bread with hazelnuts and dried fruit ($5.99) and olive bread ($3.99).

Our choice: Ciabatta flavored with dried tomatoes and paprika ($3.65).