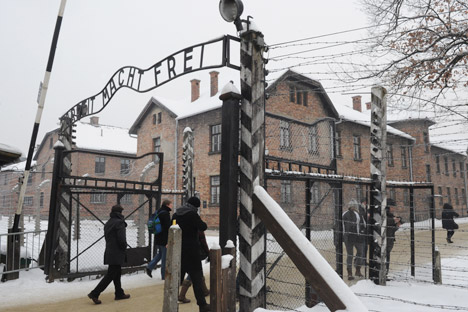 Auschwitz-Birkenau (Auschwitz), where a Russian exposition "Tragedy. Martyrdom. Liberation" opened in the museum as part of commemorative events to mark the 68th anniversary of the liberation of the concentration camps. Source: RIA Novosti

Following renovations that led to a decade-long closure, the Russian national exhibit at the Auschwitz-Birkenau Memorial and Museum was reopened at a ceremony on International Holocaust Remembrance Day.

The Russian national exhibition was opened at a ceremony in the Auschwitz-Birkenau Memorial Museum on Jan. 27, the date that Auschwitz was liberated by Soviet forces in 1945. January 27 is now held as International Holocaust Remembrance Day.

The Soviet exhibition first appeared at the Oświęcim camp (the Polish spelling of Auschwitz) in 1961. It was displayed in Block 14 of the notorious death camp – a camp in which tens of thousands of prisoners of war, Jews, Romany and other victims of the Nazi regime were executed.

The display had been closed to visitors for renovation for the better part of 10 years. It was reopened on Sunday, Jan. 27, by the speaker of the Russian Parliament, Sergey Naryshkin. Speaking in the barracks opposite the gas ovens where thousands of prisoners were liquidated, Naryshkin warned against attempts to justify Nazi crimes.

“In the years immediately following World War II, it was hard to imagine that there would be people who would attempt to whitewash the Nazis and their crimes against humanity. Regrettably, today we now see such examples, and we cannot close our eyes indifferently to them,” Naryshkin said. Among the distinguished guests attending the ceremony were Russian Minister of Culture Vladimir Medinsky, diplomats from Israel and the United States, and groups of visitors from Italy and Israel who had been inmates at the camp.

Block 14 is no different than any of the other two-story, red-brick barrack buildings. The next barracks in the row, closer to the barbed wire fence, house the Romanian exhibition. It tells the story of the Romany who were murdered here. Nearby are the national exhibitions from Slovakia, France and other countries, all of which tell the story of atrocities committed against prisoners from their homelands.

The Russian exhibition similarly relates the tragedy that befell Soviet prisoners at Auschwitz. Yet it also celebrates the victory of the Red Army, which repelled the forces of the Third Reich from Eastern Europe. This victory remained an indictment of Nazi crimes for decades.

The struggle for victory was not easy, and hundreds of thousands of Red Army soldiers gave their lives to free Poland. Veteran and commander of the machine-gun battalion of the 60th Army of the 1st Ukrainian Front, Ivan Martynushkin, spoke on their behalf at the ceremony. “The Auschwitz concentration camp was liberated thanks to their achievements, and Krakow – one of Europe’s most beautiful cities – was saved from annihilation,” said Martynushkin, who was one of the first soldiers to enter the abandoned Nazi camp. “Every building, every step from Krakow to Auschwitz, had to be taken by force,” he said.

After crossing the Vistula River, the Soviet soldiers saw the barbed wire of Auschwitz but did not immediately understand what they had found. The colossal scale of the atrocities here only became clear after a thorough investigation of Nazi crimes.

In 1941, nearly 15,000 Red Army prisoners were brought here. They were put to work as slave laborers to build the adjacent prison camp of Birkenau. Nearly all died – of hunger, cold, illness and injury. Fewer than one hundred men survived this nightmare.

The exhibition in Block 14 runs in chronological order, beginning with the story of the first camp inmates on whom the deadly nerve gas Zyklon B was tested. There is also a section about the resistance. The display similarly recounts the lives of civilians in the occupied territories, with a special section about the children.

Additionally, there is a small conference room on the upper floor where visitors can watch documentary film material. Temporary exhibitions will also be held on this floor – currently there is a display of work by the artist Zinovy Tolkachev. He arrived at the Auschwitz camp in 1945, just hours after it was liberated by the Red Army, and made a number of sketches.

The greater part of the exhibition comprises multimedia materials, with a special video display in three languages – Russian, Polish and English.