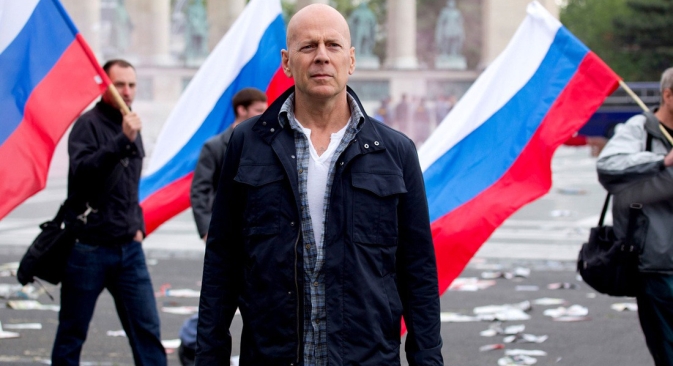 Bruce Willis: "I think people love John McClane because he’s not a superhero." Source: A footage from “A Good Day to Die Hard” / Kinopoisk.ru

One of Russia’s favorite Hollywood actors sat down with Rossiyskaya Gazeta’s Marina Ochakovskaya before a screening of “A Good Day to Die Hard.” Bruce Willis discussed filming in Moscow, why fans love the Die Hard series, and the ways in which he has grown along with his character, super-cop John McClane.

“A Good Day to Die Hard,” the fifth installment in the Die Hard series, is going into wide release in Moscow. Though one of the most popular blockbuster franchises in Russia, it has not had an easy life here. John McClane first came crashing into our culture at a time when film distribution had died, while legal video rentals did not yet exist.

As a result, we learned of the feats of this sardonic New York cop from grainy pirate videos in appallingly bad amateur translations. Even so, we loved him instantly and completely. If Schwarzenegger and Stallone appealed mainly to teenage boys, Willis was a hero for grown-up men and women.

The business of pistol-fueled shootouts and running barefoot through broken glass aside, McClane does nothing out of the ordinary. Every man knows that, sooner or later, he will find himself in the midst of a total catastrophe: he will grit his teeth and do what he has to do. Every woman dreams of such a man and, of course, would prefer him to be bald and with a slight squint.

Trust in Willis and his action hero is so high that a Russian bank has capitalized on it in a major Moscow ad campaign. Willis looks down from billboards at drivers and passersby, squints and seems to say: “Get a loan, man! No pain, no gain.”

“A Good Day to Die Hard” takes place in Moscow. John McClane’s son, Jack, is working in the Russian capital under an assumed name. He is protecting a former Russian criminal-turned-whistleblower named Komarov, who is ready to open the world’s eyes to the theft of plutonium from Chernobyl (Russian mafia, plutonium, clan warfare: Hollywood’s ideas of Russia change very little, if they change at all).

When Jack finds himself in a fix and his life is in real danger, old man McClane jumps into the fray — because who else will?

Bruce Willis himself, whom Rossiyskaya Gazeta caught up with following a reception on the 21st floor of Fox Plaza, has a simple explanation for fans’ longstanding and well-wishing interest in the career of John McClane.

Bruce Willis: I think people love John McClane because he’s not a superhero. He’s got no special skills or natural abilities. He’s just an ordinary guy who, when he finds himself in extreme situations, realizes that he’s just got to fight. Otherwise, things won’t go well for him and his family. That’s why it’s not hard for viewers to put themselves in his shoes.

Rossiyskaya Gazeta:But hasn’t he changed after 25 years? Gotten some muscles? Learned to jump out of a plane without a parachute?

B.W.: Well, of course he’s gotten smarter and, to put it mildly, older; but, otherwise he’s the same guy he was. It’s we, the people who make movies, who’ve changed. There’s new technology, we know how to shoot fantastic fight scenes, chase scenes. But in these new surroundings he’s still the same guy: loyal, down-to-earth, and with a sense of humor.

RG:I recently talked to Milla Jovovich, who starred in an action movie shot in Moscow — and now you. Why this sudden interest?

B.W.: You’d have to ask the guys who write the screenplays. I’m an actor: wherever they send me, I act. As for Moscow, I have to say that I’ve been there many times — always had a great time without any chase scenes. It’s a high-energy city, I feel good there. This time we filmed on the Garden Ring Road, and the local authorities did everything they could so that nothing got in our way. Great organization.

B.W.: Of course the role demands a lot physically. There’s a lot of running and jumping, but I keep in shape. And, so far, I can handle it, even if I’m a little slower than 25 years ago. But my character hasn’t frozen in time either. So far, so good.

But I’d like to point out that these Die Hard films aren’t just about a victorious hero: every one of them is also about McClane’s family; about his difficult relationship with his wife; about his successes and failures in relating to his kids. I think that aspect is no less important in explaining the success of the first four films and — I hope! — the success of this one.

From film to film, my character becomes wiser and thereby enriches the action that calls for all those chase scenes and explosions. I never get tired of those scenes because, fortunately, I can rely on my own experience in relating to my three daughters as they’ve grown up and transfer that, in one way or another, to the screen. All that makes me think I’ll never get tired of playing John McClane.