Learning Russian by solving a mystery 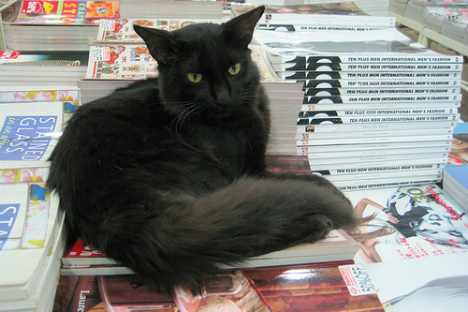 Ignaty Dyakov’s new book intends to help learners crack the code of the Russian language by engaging them in a detective story.

Though he doesn’t aspire to rub shoulders with the likes of Boris Akunin or P.D. James, Ignaty Dyakov nevertheless had good reasons to make a foray into the world of mystery writing.

Dyakov is a London-based Russian linguist and entrepreneur whose business specialises in providing support services for companies entering the Russian market. He is also the author of a new book that intends to help learners crack the code of the Russian language by engaging them in a detective story.

The author said he believes that “The Story Sensation: For Learners of the Russian Language (and not only for Guadeloupians!)” is the kind of aid that Russian language learners have been searching for.

A major complaint among students that Dyakov heard while teaching was that the texts they were learning from seemed uninspiring and had little relevance to contemporary life. He decided to address this problem by writing a book in a genre with an enduring appeal and put the action in a modern setting.

“Students aren’t ready for Pushkin or Dostoevsky, but they do want something interesting to read,” he said. “Detective stories are a familiar convention in any language, and they can be picked up whenever the student has time in his day.”

Dyakov’s book is meant to be a supplemental aid rather than a replacement for core texts, and despite the unconventional approach, he said he feels that there is as much information as entertainment in what he has written.

Unorthodox and adventurous takes on any subject, even Russian language learning, don’t always go down well with everyone in Russia. Dyakov is only too well aware of this, following the minor tempest that surrounded the popular textbook “Let’s Go! (Poehkali!)” by St. Petersburg-based Stanislav Chernyshov last year.

The book series sold more than 100,000 copies around the world, but a Duma deputy from United Russia, Frants Klintsevich, proclaimed that passages in the book tarnished Russia’s reputation in the way they discussed money, drugs and corruption.

Some of the passages feature a corrupt policeman and a drug-taking university professor.

Dyakov counters that the Duma critic “completely misunderstood the purpose” of the exercises that he found offensive in the book.

He sees his own book as a companion reader to such textbooks, and though his characters encounter corruption as well, he feels he has little to fear by way of censure, especially since his story is set outside Russia, in Guadeloupe. This choice of locale was made more to accommodate the needed grammar explanations rather than as any attempt to avoid controversy, he said.

Within the framework of his mystery, Dyakov tried to include as many current expressions as the story would bear. These relate to a diverse set of topics ranging from food and sports to transportation and business life. There is also a smattering of common proverbs and references to well-known Russian songs and films to help the reader get up to speed with general conversation.

For those wanting to establish and maintain business contacts in Russia, it is important to be able to display some knowledge of the local culture as well as the language, Dyakov said.

“When foreign partners do that, it shows they’re serious,” he said.

Language learners with a business goal in mind are a particular group he expects to benefit from his efforts. It is a group that is slowly starting to grow again, he said, as companies emerge from the downturn and look again to the Russian market as a place to expand.

Undoubtedly, overcoming the language barrier remains a key point in living, working and doing business in Russia, and Dyakov said he hopes that solving a fictional crime will help his readers solve some of their own problems with Russian.

“Rasskaz Sensatsiya” (The Story Sensation) is available through Amazon in Europe and the U.S., and Dyakov aims to find a publisher for it in Russia in the near future.