Russia seeks return of Jewish books lent to the U.S. Library of Congress 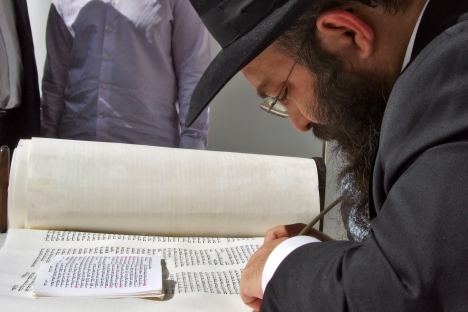 The Russian State Library had repeatedly asked the U.S. Library of Congress to return the seven valuable books from the Schneerson Collection. Source: Kommersant

Russia is going to get back seven books from the Shneerson Collection borrowed by the U.S. library of Congress.

"We are considering various options for the return of these books, including legal action, but there may still be a possibility to bring the books back with another appeal to the Library of Congress without a court order," he said.

Visly said the Russian State Library had repeatedly asked the U.S. Library of Congress to return the seven valuable books.

"We wrote them a lot of letters. Sometimes they responded and sometimes they did not. They offered other books as a substitute. But the offers were unequal. We are mired in a stalemate," he said.

Visly added the books were most probably stored at the library of the U.S. Jewish community rather than at the Library of Congress.

Seven books from the Schneerson collection were passed temporarily to the Library of Congress in 1994 through the international interlibrary exchange system, the Kommersant daily on Friday citing Russian State Library Deputy Director Alexander Samarin.

Having received the books from Moscow, the Library of Congress passed it to the Agudas Chasidei Chabad library. The United States later asked Russia to extend the lending period, and the Russian State Library issued extension permissions at the Culture Ministry's sanction in 1995 and 1996.

In 2000, the Hasidic community through the U.S. Embassy in Russia to exchange the seven book and prepared a list of replacements. However, the Russian side said that it the offered books were of lower value and did not agree to the exchange, Samarin said.

The Schneerson Library is a collection of old Jewish books and manuscripts built by Rabbi Yosef Yitzhak Schneerson in the Russian Empire at the end of the 19th century. Part of the collection was nationalized by Bolsheviks in 1918 and eventually joined the Russian State Library collection.

Schneerson managed to take the other part of the collection out of the Soviet Union while emigrating in the 1930s. About 25,000 pages of manuscripts from the collection were later seized by the Nazis, then were regained by the Red Army and handed over to the Russian State Military Archive.

Chabad-Lubavitch has been seeking the Schneerson collection's handover since the end of the 1980s.

Reports posted on January 17, 2013, said a federal court in Washington had ordered a daily fine of $50,000 for Russia's failure to transfer the Schneerson Collection to the Chabad-Lubavitch religious community.

The Russian Foreign Ministry expressed indignation at the court order.