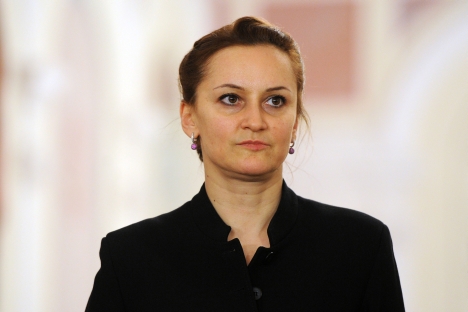 The acting artistic director of the Bolshoi Theater spoke with Russian daily Izvestia about stepping in to implement recovering director Sergei Filin's program for the ballet company.

Following the assault on Sergei Filin, Galina Stepanenko, a People’s Artist of Russia, assumed leadership of the Bolshoi Ballet after being appointed to the position by the recovering artistic director. She will be responsible for carrying out his plans for the season, including a new production of Igor Stravinsky's masterpiece "The Rite of Spring" on its 100th anniversary.

Izvestia: You are the first representative of “the fairer sex” to be in the position of artistic director of the Bolshoi Theater.

Galina Stepanenko: I am very proud of it, and my family is extremely proud of me. It is a huge responsibility, of course.

This summer the Bolshoi Ballet will travel to Australia. In late May–early June the company will perform “The Corsair” and “The Bright Stream.”

On Jul. 29–Aug. 17, the Bolshoi Ballet will celebrate the 50th anniversary of its London tour on the stage of the Covent Garden. It will give its three classic performances: Yuri Grigorovich productions of “The Sleeping Beauty” and “Swan Lake,” as well as the Marius Petipa production of “La Bayadère.”

The program of three one-act ballets will include the UK premiere of Yuri Posokhov's “Classical Symphony,” the new production of “The Rite of Spring” (created for the Bolshoi by choreographer Wayne McGregor to celebrate the 100th anniversary of the classical version of the ballet), and George Balanchine's “Diamonds.” In addition, the ballet company will perform “The Flame of Paris” in London — a production by the former head of the Bolshoi Ballet, Anatoly Ratmansky.

Izvestia: Did you know about your appointment in advance?

G.S.: No, it was completely unexpected. Sergei Filin called me from the hospital and said: “I’ve got an idea.” And, so, I’ve become the acting artistic director.

Izvestia: Did you agree right away?

G.S.: I had no time to consider other options.

Izvestia: Do you and Sergei Filin call each other often?

G.S.: Very often: if there is something I don’t understand, I make sure to seek the advice of Sergei Yuryevich.

Izvestia: Have you developed any plan of action for the next few months?

G.S.: There is a plan — there are tours, premieres, performances, openings. My goal is to make sure that everything in this plan is accomplished. We are to have a big tour in London and a smaller one in Australia. In spring we will open “The Rite of Spring” and “Apartment.” In the second half of July we will premiere the “Eugene Onegin” ballet.

Izvestia: As an interim officer, legally you have all the rights of the artistic director. Do you have any plans to dismiss current dancers and hire someone new?

G.S.: We always admit young artists at the end of the season.

Izvestia: How are you going to develop your work with the main opponent of the theater management, Nikolai Tsiskaridze?

G.S.: Today Nikolai Tsiskaridze is still on the team. He teaches, rehearses and dances.

Izvestia: There is an opinion that Wayne McGregor has delayed the production of “The Rite of Spring,” because the time allowed to him for rehearsal was insufficient and the artists of the Bolshoi were engaged in other performances.

G.S.: That is not true; we've been negotiating for several years. All the conditions to enable the work of the choreographer were there. The truth is that Wayne McGregor and the management of the Bolshoi Theatre have decided to reschedule the production to a later time — when Sergei Filin fully recovers and returns to his duties.

Izvestia: In your search for a replacement for McGregor, why did you decide in favor of Tatyana Baganova?

G.S.: I got this idea while I was taking over my new duties. Our festival, "The Age of the Rite of Spring – The Age of Modernism," was conceived as the key event of the season. We will be visited by various ballet companies coming to give their outstanding performances of Igor Stravinsky's “The Rite of Spring,” on the 100th anniversary of the music.

That is why [we] definitely wanted to keep the premiere; and it was decided to invite Tatyana Baganova. Sergei Yuryevich encouraged this idea. Tatyana is a very courageous woman: she agreed to produce the performance on a very tight schedule, developing the new performance together with the designer Alexander Shishkin virtually from scratch. She visited us for a day: she saw all morning classes; she viewed the artists she can cast. We begin rehearsing on Feb. 15.

Izvestia: So, in the end, the Bolshoi Theater is going to have two productions of “The Rite of Spring” in its repertoire.

Izvestia: How is the preparation for the premiere of Mats Ek's “Apartment” going?

G.S.: We have been rehearsing for several weeks. The artists of the Bolshoi Theatre have worked with Ek's assistants. His wife, the outstanding ballerina Ana Laguna, came here; and now the choreographer himself has come here. He will spend the next several days watching the performing artists and assessing the work done.

Izvestia: He wasn't scared away.

The interview was first published in Russian in the Izvestia newspaper.