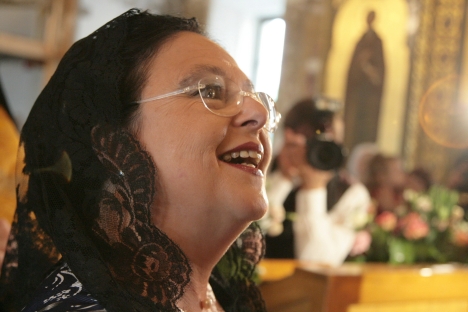 Grand Duchess Maria Romanova: " I believe a monarch or a dynasty head must be above political strife with a duty to unite the entire nation." Source: PhotoXPress

While the House of Romanov is celebrating its 400th anniversary in 2013 Grand Duchess Maria Romanova, its head, spoke with Russia Beyond the Headlines about her position and what role her family could play in modern Russia.

Grand Duchess Maria Romanova the head of the House of Romanov, talks to Elena Novikova of Russia Beyond the Headlines about her position and what role her family could play in modern Russia.

Russia Beyond the Headlines: The House of Romanov is celebrating its 400th anniversary in 2013. What is the meaning of this date?

Maria Romanova: For me, the 400th anniversary of the House of Romanovs is only a part of a great national celebration of the 400 years that have passed since the end of the Time of Troubles and the restoration of the Russian sovereignty.

How did the Romanovs come to power?

In 1598, Fyodor, the last tsar of Russia’s founding Rurik Dynasty died without leaving an heir. The next 15 years, known as the Time of Troubles, were ones of turmoil, during which Russia was invaded by the Commonwealth of Poland-Lithuania. A coalition of Russian nobles and peasants defeated the invaders in late 1612. On Feb. 21, 1613, a gathering of Russia’s landed nobles and a few peasants elected Mikhail Romanov tsar, establishing the Romanov Dynasty, which lasted until the murder of Emperor Nicholas II and his family by the Bolsheviks on July 17, 1918.

Our dynasty was offered the crown by the Great Local Church Council and Zemsky Sobor (“assembly of the land”) in 1613. This was a decision that set the outcome of the fight for liberation in stone, a historical fact that cannot be undone. This victory was won thanks to the sacrifice and valiant efforts of the representatives of all Russian social classes.

I am convinced that the 400th anniversary of the end of the Times of Troubles will be celebrated with due splendor. However, I believe that this date we needs to be commemorated first and foremost with prayer, charity and educational campaigns.

RBTH: You were born in Madrid, went to school in Oxford and have lived most of your life in Spain. That notwithstanding, in your interviews you have frequently called Russia your true home. What is stopping you from going home?

M.R.: If I were a private person I could return to Russia at any moment. However, as head of the Russian Imperial House I am entrusted with the task of its preservation as a historical institution. In civilized countries, dynasty heads were only able to return to their homelands after the states had clearly defined their legal status.

As proven by France, Italy, Portugal, Bulgaria, Romania, Hungary, Serbia, Montenegro, Albania, Afghanistan and many other countries whose royal houses had been banished and later returned, a legal status of a non-ruling dynasty is absolutely compatible with a republican political system and does not go against the local constitutions and laws.

I am not putting forward any political claims at all, nor am I trying to reclaim any of my ancestral property. I do not expect any preferential treatment either. However, I am justified in my hopes that the reintegration of the imperial dynasty in modern Russia’s contemporary life will be as successful as in other European countries.

Moreover, I expect a law to be passed to protect the Russian Imperial House as an object of historical and cultural heritage in accordance with the article 44 of the Russian constitution. I have no doubts that all legal issues will sooner or later be resolved and eventually we will come back to Russia for good.

RBTH: You have met with the country’s leaders more than once but all of those meetings were informal. Would an official meeting with the Russian president be possible in the near future?

M.R.: It is entirely up to the president. I am certain that such an audience will be a token of our mutual respect. Moreover, if such a meeting leads to an action plan to enhance the relationship between the modern state and the historical institutions that preserve the country’s ties with its great history, it will be likely to benefit Russia’s global image.

RBTH: Do you believe in the restoration of monarchy in Russia?

Despite going through periods of decline and revival, the idea of monarchy will never cease to exist. Indeed, you could come up with a thousand arguments against monarchy pointing out its numerous flaws, but has the republic done away with them? In fact, it seems to me these problems have only gotten worse.

The spreading of the republican form of government has failed to deliver humanity from wars, political terror against own people and powerful social and economic crises, let alone avert moral and spiritual catastrophes.

Home to a large number of ethnic groups with a variety of religious and cultural traditions, Russia might be in need of a living symbol of unity, which is a lawful hereditary monarch.

RBTH: Would you like to play a more active role in Russia’s political life?

M.R.: I believe a monarch or a dynasty head must be above political strife with a duty to unite the entire nation. He should not have his name associated with any of the parties, even the one he feels the most congenial with.

Neither my son nor I will ever take part in political struggle as a matter of principle. We are completely above politics. If the Russian nation expresses a desire to restore monarchy, our lawful successors will be ready to fulfill this duty.

Should that happen, however, the legitimate monarch would ascend the reclaimed throne not as a party leader but as head of a historical dynasty equally close to all fellow citizens, willing to hear opinions of all parties and groups without belonging to any of them.

RBTH: You have said numerous times in your interviews that you do not have any claims on the Romanov dynasty’s property in Russia. Do you not believe in restitution?

M.R.: I strongly oppose the idea of restitution. I am not asking for anything for myself personally and do not recommend anyone else do it either. A new round of property redistribution will provoke bitter conflicts leading to violence, suffering and resentment.

The only exception is Orthodox monasteries and churches as well as other confessions’ places of worship. Those were intended as prayer houses when they were built; using them for other purposes is a blasphemy and a slap in the face of believers. Although most of the sacred objects have been restituted by now, some problems still remain. Nevertheless, I hope they will be resolved according to the principles of law and justice.