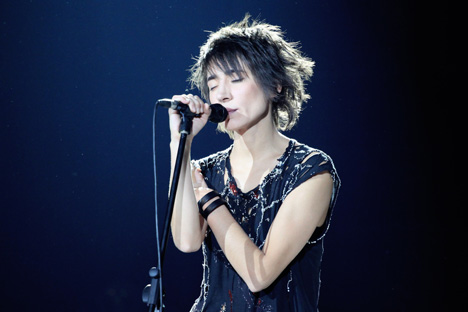 In the first 12 hours, the new album by Zemfira the Russian queen of rock was listened to more than a million times

The day before Zemfira’s album was officially released and appeared in music stores — it became available on Yandex’s music platform, Yandex Music, free of charge. Analysts say this is a new trend in the music industry, whereby CD sales are only seen as a means of promotion at tours and concerts.

Throughout most of the 2000s, Zemfira’s influence on the Russian music scene could not be underestimated. At the beginning of the last decade, her serious, poignant and exciting tunes filled the airwaves and could be heard pumping out of every other kiosk and open window.

Her concerts filled stadiums and she headlined at numerous summer festivals — when she felt like going, that is. By the end of the 00s, however, Zemfira went quiet. Her last album, “Spasibo” (“Thank you”), came out in 2007. Her concerts also became something of a rarity, as did her interviews with the press.

The release of her new album, “Zhit v tvoei golove” (“Live in your head”), is timed to coincide with her big Russian tour. The CDs will be sold for the first time in the Siberian city of Tomsk. A large portion of disc sales will take place as Zemfira is on tour, as CDs will be sold to fans outside the concert halls.

The music will also be sold on the website of her record label, Navigator Records, and on iTunes, which has recently become available in Russia. Still, it is unlikely the singer will earn big money from this.

The leading Russian critics, who have been following Zemfira’s every move since the start of her career, are already singing the album’s praises.

“It’s important to remember that ‘Zhit v tvoei golove’ is not something Zemfira has made because that is what is expected of her; it is not a throwaway record, made to fulfill a contract. In theory, it could be either of these things. More than anything, the album is a conversation that has matured to the extent that nothing can be said against it,” says the editor-in-chief of Afisha magazine, which is Moscow’s answer to Time Out.

Since her new album debuted online, Zemfira’s sad and poignant tunes about humility, love and death have become some of the most talked about themes on social networks.

“It’s just the girl has gone quiet for five years, and, over this time, she’s recorded 10 songs. Whatever they are like, there is no one more talented than her singing or recording. And it seems this is just something we have to accept,” Aleksei Kruzhevsky wrote in Gazeta.ru.

The album is being distributed as such: the songs are streamed from the country’s main search engine; the discs are nothing more than souvenirs that are only necessary at the singer’s concerts, where they are sold to the Zemfira’s hoards of young female fans.

Many artists — both Russian and Western — have been known to distribute their albums online for free.

The case with Zemfira’s latest album, however, has a nuance. For its music service, Yandex has employed the same strategy as Spotify: thanks to advertising, Internet users can listen to music legally, without having to pay anything.

Spotify offers a paid subscription service, while Yandex users only pay for music if they use the service on their mobile devices.

Yandex Music has five million tracks from the biggest labels, as well as recommendations and “radios” from LastFM. The service has attracted billions of hits, though is not yet certain whether it has managed to make a profit: there are still not many advertisements on the site, but big search engines such as Yandex can afford to wait.

Yandex also offers a mobile phone app that users have to pay for, which makes it possible to download music and listen to it offline, with a subscription.

All of Yandex’s music services are currently only available in Russia, Ukraine, Belarus and Kazakhstan — these are the limits of the license. However, most of Zemfira’s listeners are from these countries. Meanwhile, Yandex Music’s catalogue is not limited to Russian music.

The company has signed contracts with all the major players in the music market and is now starting to close deals with the less mainstream labels, slowly but surely increasing their collection.

At the end of the last century, nearly all recordings were pirated on tapes, CDs and pirate websites. Thus, artists could not expect to get rich by releasing an album: the record would immediately become available to purveyors of pirated goods, and no one expected large legal sales.

However, legally sold CDs still worked as a promotion and as souvenirs at concerts; this was the main way music artists of all genres balanced their books in Russia.

In the mid-2000s, sales of music on discs fell across the world, and live appearances were what kept most artists in the black. Releasing physical discs is merely intended to complement a concert tour. Selling music online only partly corrects the situation.

In Russia, legal music sales continue to fall. All music platforms have a massive pirate competitor — the social network VKontakte, which stores almost every song ever made. The strange thing is that the site is prepared to delete music on request, but such requests hardly ever come through.

“The rare artists who insist on their tracks being removed from the social network cannot boast of top sales on iTunes,” Pavel Durov, the founder of VKontakte, told Vedomosti newspaper.

This is why, according to him, more and more musicians are voluntarily putting their tracks on VKontakte to be listened to — because the Russian Joe Shmo does not care if he is listening to legal music or not, as long as it is free.

Musicians have more or less come to terms with the fact that they do not stand to make money from recordings: they are still interested in selling tickets at concerts. In Zemfira’s case, you can be pretty sure that the venues will be packed wherever she goes.