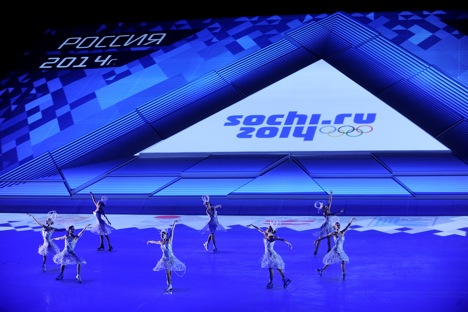 A successful conclusion to the 2014 Olympics will offer Sochi the chance to send out a strong message about the strength and capabilities of modern Russia.

In about a year from now, the Winter Olympics flame will be extinguished, drawing to an end two weeks of sporting festivities that will have put Sochi and Russia in the global spotlight like never before. International observers hopefully will have witnessed a spectacular sporting event, but they will also be eager to see what kind of statement the games have made about the new, modern Russia and its place in the world.

Hosting the Olympic Games is a showcase of national pride, culture and capability like no other. Previous Games have proved that the Olympics is one of the very few international events that can change the way its host country is viewed by the world — for better or for worse.

Vancouver's hosting of the last Winter Olympics is a good example. The success of the games, combined with smartly targeted promotional activity to capitalize on the event and its afterglow, helped propel Canada from 12th place in the Country Brand Index in 2006 to first in 2010.

As London prepared to host the 2012 Summer Games, British businesses and the British government were quick to recognize the scale of the opportunity.

Sponsors, suppliers and thousands of other companies and brands with a stake in the games were determined to make the most of the global spotlight to drive new business at home and abroad. Meanwhile the government launched its biggest ever campaign to promote Britain abroad and attract new investment and new visitors to Britain.

But while we were keen to focus on rewards, the domestic and international media were determined to remind us of the reputational risks. Reports repeatedly questioned whether the construction industry could deliver on time and to budget, and whether the government was up to the job of managing the process. They said local communities would be damaged by the building project, London's transportation systems would never cope with demand, and security fears would ultimately overshadow the games.

Sochi has suffered similarly at the hands of the press in recent months — despite the praise that the games preparations have regularly received from the International Olympic Committee's inspectors.

Fears about the construction project falling behind schedule have frequently been raised in the international media, along with concerns about poor working conditions, bribery and corruption, security and environmental impact. Critics within Russia and abroad have seized the opportunity to draw attention to their causes, and this will only become more intense now that the one year countdown has begun. These reputational challenges are faced by similar projects the world over.

In London, the media scrutiny reached its peak in the final weeks before the games, when journalists had arrived in Britain but the sport was yet to begin. Every part of the Olympic experience was tested — from ease of arrival into the country and the effectiveness of transportation systems, to the quality of the spectator experience and security around the Olympic Village.

This is the period that can make or break the Olympic Games. In Beijing, concerns over air pollution threatened to derail China's final preparations. In Vancouver it was a lack of snow, while for London it was the issue of security and manpower.

All businesses, organizations and sponsors associated with the Sochi Games will be acutely aware of the need to protect their reputations from the inevitable scrutiny. They know that, in the digital age, they are only ever one tweet away from a potential crisis, and that journalists arriving in the country have the power to set the whole tone of the games based on the welcome they receive at borders, airports and security.

For them, just as for the athletes, the final 12 months preparation is critical and will make the difference between success and failure. The contingency plans that they put in place over the weeks and months ahead will define their ability to respond to surprises in that crucial final period.

That is why many will already have their crisis response structures and plans in place, with trained spokespeople backed by robust media operations and proactive communications campaigns. The year ahead will be about testing these structures to destruction, working through crisis scenarios to ensure that every eventuality is covered.

The risks may be high, but the potential rewards are great. London 2012 proved that successful games can provide a major boost to a nation's global brand, and Russia cannot allow its critics to jeopardize such a priceless opportunity.

About a year  from now, a successful conclusion to the 2014 Olympics will offer Sochi the chance to send out a strong message about the strength and capabilities of modern Russia. And with the glamour of Formula 1 gracing Sochi shortly after, and the World Cup in 2018, Russia has a chance to make that message resonate even more powerfully over the decade to come.