Russian Adele will perform at Eurovision 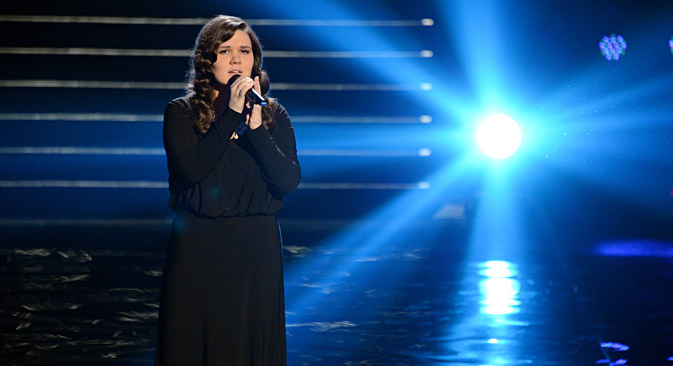 The winner of The Voice TV song contest Dina Garipova during her final performance. She will represent Russia in the Eurovision Song Contest 2013 (archive photo). Source: RIA Novosti / Ruislan Roshcupkhin

Dina Garipova, the winner of the Russian version of the TV talent show “The Voice” (“Golos”), will go straight to the Eurovision Song Contest, bypassing further selection rounds. Garipova is renowned for her strict, buttoned-up style, and may count this to her advantage in the competition.

As a rule, a country decides who will represent it at the Eurovision Song Contest. This year, however, Russian TV Pervy Kanal (Channel One) decided to speed up proceedings. Without any additional voting, it was announced on Feb. 19 that the winner of “Golos” season one, Dina Garipova, would sing for Russia at the famous song contest, which is held every spring.

This is not the first time Eurovision participants were selected without voting.

On this occasion, though, the jury had solid grounds for making the executive decision: at the “Golos” final on Dec. 29, fifty-four percent of Russians voted for Garipova; on the following two days, there was already talk of sending her to the Eurovision contest.

At the competition, Garipova will sing a piece titled “What If” (specially written by Swedish songwriters Gabriel Alares and Joakim Bjornberg) and be accompanied by the former bassist for the Russian band Avtograf, Leonid Gutkin.

Garipova could be the first performer in the entire history of Russian show business to experience such a fast ascent to fame — the sort of meteoric rise enjoyed by the stars of “American Idol” and “The Voice.”

Dina was born in 1991 into a family of doctors in Zelenodolsk, in the Republic of Tatarstan. Yet Dina was not destined to follow in her parents’ footsteps: from the age of six, she was obsessed with singing.

The flamboyant sextet of Russian grannies

In 1999, Garipova won the all-Russian song competition Zhar-Ptitsa; in 2005 she won an international competition in Tartu, Estonia, and in 2008 she joined up with the Zolotoi Mikrofon song theatre to tour around France.

Her singing aspirations did not stand in the way of her completing a distance-learning course in journalism at the Kazan State University. In 2010, Garipova gave her first solo concerts in her native Zelenodolsk. A year later, she was nominated for the President of Russia Prize.

Dina was already a popular singer in her hometown when she entered the first rounds of the “Golos” show last year, managing to get onto Alexander Gradsky’s team. Gradsky is one of the leading stars of Russian show business — and quite an eccentric one at that.

Gradsky started as a rock musician, performing Elvis Presley songs in his first groups. Later on he expanded his repertoire, thanks to the songs of classic Soviet singers Alexandra Pakhmutova and Nikolai Dobronravov.

In the late 1980s, he sang the part of Zvezdochet in Rimsky-Korsakov’s “The Golden Cockerell” at the Bolshoi Theatre. He has written several rock operas and not so long ago finished a “Master and Margarita” production, based on Mikhail Bulgakov’s novel.

Garipova has benefitted from teaming up with the Russian vocalist: he was the one who branded the singer as the Russian answer to British superstar Adele.

Garipova won the hearts of the audience not just because of the way she looked, but mainly because of her phenomenal, professionally trained voice and perfect selection of songs. On one episode she even performed one of her British counterpart’s songs — “Skyfall,” which is now the most successful Bond song of all time.

As the singer told Moskovsky Komsomolets in an interview, there was talk about her being sent to the Eurovision competition as soon as she had performed at the “Golos” final; nonetheless, the news of her approval as the Russian representative still came as a huge surprise.

According to Garipova, the song “What If” (which has yet to be aired publically) is “bright, tender and very strong at the same time.”

Universal Music Russia recently signed a contract with the “Golos” winner. The head of the division, Dmitry Konnov, told Gazeta.ru that Eurovision’s reputation as being a bit of a freak show is now defunct.

According to him, although the craziest acts are remembered for their very grotesqueness, in recent years, public voting has placed these acts right at the bottom of the chart.

Meanwhile, the comparatively severe style of Dina Garipova can only be to her advantage.

In the past decade, Eurovision has seen both types of performers: no one could have predicted the victory of the Finnish masked heavy-metal band Lordi in 2006; nor could anyone have guessed that Bosnian Maria Sherifovich would come out on top a year later, with her song “Molitva” (“Prayer”).

Whatever the case, Gradsky, as Garipova’s mentor on the “Golos” show, is sure that Dina will give it her best shot and make Russia proud.

Gradsky told RIA Novosti that he would not start predicting her victory — not because he has any doubts in his pupil’s abilities, but because of the unpredictable nature of the event, which, according to him, hinges more on socio-political factors than the music itself.

However, Gradsky did say that he is very pleased with the song his pupil will sing, and that he plans to help her prepare for the competition.