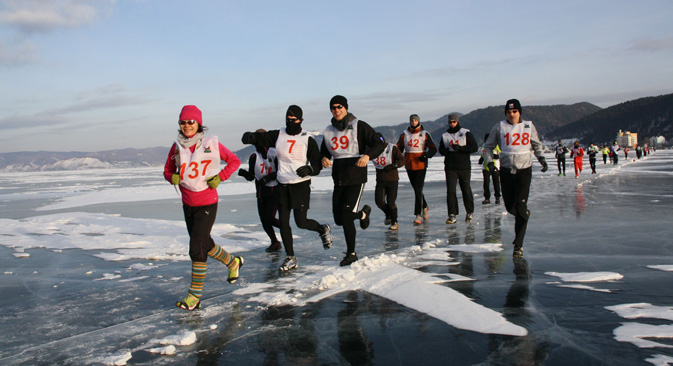 Lake Baikal Ice Marathon was held for the ninth time on March 3, 106 of the 143 participants were foreigners, mostly from Europe, the U.S. and Japan. Source: David Isaksson.

Athletes battle negative temperatures (and evil spirits) to run a marathon on the frozen Siberian lake.

In the lobby of Hotel Baikal in Listvyanka, a small town on the shore of Lake Baikal, Alexei Nikiforov is explaining to about 80 people that a large part of the lake is covered with “black ice” – and therefore very slippery.

”I'm sure that what's most important for you is to run the whole course, so don't be in a hurry,” he said.

The people in the lobby have gathered here to run the Lake Baikal Ice Marathon, which was held for the ninth time on March 3. Nikiforov is its organizer – the man who came up with the idea of a marathon across a lake in Siberia.

“I wanted the race to go from one side of the lake to the other, because then you can look at any map of Baikal and see the course,” he said. “If you're going to run a marathon in New York, you can't look at the map of the city and understand where you're going to run.”

As marathon running has become more popular organizers are coming up with unusual settings for their races. There's a midnight sun marathon in Tromsø, Norway and a polar circle marathon on Greenland. The more exotic races attract international runners, and 106 of the 143 participants of the Lake Baikal Ice Marathon are foreigners, mostly from Europe, the U.S. and Japan.

Olkhon, a natural treasure island in the middle of the Lake Baikal

For many of the runners, the marathon is part of a longer trip to Russia. Edward Graham from Chicago is on a month-long trip through Russia with his girlfriend. He found out about the marathon when he visited Listyanka a year and a half ago, and decided to come back.

“We had a few snowstorms in Chicago, so I've had the chance to run on ice. But the climate here is different of course,” said Graham. “Listvyanka makes Chicago look like a tropical island he said in a hostel in Listvyanka the day before the race.”

Some of the runners are expats who live in Moscow. Hawaii native Irene Tsai moved to Moscow last year. “Me and my husband have been running in Gorky Park, where there's ice and snow. That was supposed to be our training for this, but we went out on the ice here today and it's quite different,” she said.

For better traction on the ice, almost all the participants have brought ice cleats or shoes with studs. “We have something called Yaktrax,” Tsai said, referring to steel coils that you strap on your shoes. “We never ran with those in Moscow, but we tried them here and they worked surprisingly well.”

Plunging into the icy waters of Lake Baikal

The next morning at 9:40 am, slightly behind schedule, the runners gather on the lake. The sun is shining, and even though the thermometer shows -5 C, it feels warm.

There's a somewhat rushed ceremony in which all the runners get a cup of milk to sprinkle on the ground in order to pacify evil spirits. Up until this year, vodka has been used in the ceremony, but today the spirits have to make due with a non-alcoholic alternative.

Nikiforov counts down from five, and the runners are off. Between three and six hours later they will have reached the other shore. Except for at the start, there are no spectators and during the race some runners find themselves completely alone on the ice.

Back at the hotel after the race, British participant Michael Bartley was pleased with his run. “I was a bit worried about the wind chill factor,” he said. “I only had three layers of clothes, but when we got out on the ice the sun was shining, so it was too hot. A few people were taking off layers of clothes while they were running.”

Bartley said that he found the race well-organized, but some runners were upset that they had to wait for more than three hours after they'd finished to get back to the hotel. A crack had opened in the ice, which made it difficult to transport the runners from the finish back to Listyanka.

”Terrible. You're cold and it took forever,” said Simon Biltcliffe. Biltcliffe, who has run a marathon in Greenland, described the Siberian race as very difficult. “I'm amazed how many surfaces you had to endure,” he said. “It goes from sheet ice through different cobbled areas to thick snow. It was as hard as I expected in some places, and harder in some places. But I made it.”

Next year is the 10th anniversary of the race, and Nikiforov says he wants to do something special. But whether the marathon will grow is uncertain. “Last year we had 125 runners and we saw that as the limit, but this year there were even more,” he said. “The race is not advertised. If we did that, we'd have thousands of runners, and our company is small.”