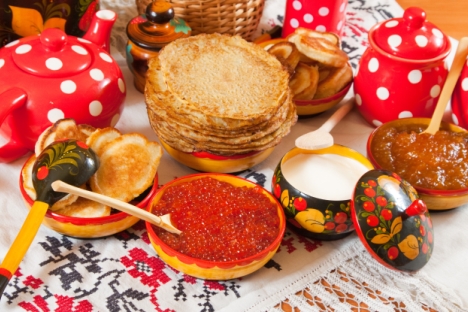 Russia’s Maslenitsa spring carnival starts on Mar. 11, even though, climate-wise, it still feels like winter. To warm themselves, Russians spend the festival week eating tons of pancakes with countless different kinds of fillings. RBTH takes a look at the Maslenitsa pancake tradition and shares a recipe for Russian Beer Pancakes with readers.

Russia has a special kind of festival. To start with, it is not called Festival like many other festive seasons celebrated around the world right before Lent. Instead, Russia’s festival is called “Maslenitsa” or “Dairy Week.”

Instituted in the dim and distant past (like other self-respecting carnivals) and dedicated to the cult of fertility and ancestor worship, Slavic Maslenitsa survived the Christianization of the ancient state of Rus and entered the Orthodox calendar as the last week before Lent.

The main feature of Maslenitsa is pancakes, which Russians make by a hundred different recipes: using sour dough and without yeast; rich and without eggs; from wheat, rye and buckwheat flour.

Like their Western cousins — crêpes, British pancakes and Bulgarian palachinki — Russian pancakes have innumerable fillings, both sweet and savory. However, there is one thing their fillings always contain, and that is melted butter and sour cream (used as a sauce in most dishes in Russian cuisine, including soups). Finely crumbled hardboiled eggs are also preferable, but you can manage without them.

Beyond this, the composition of the filling depends on the imagination of the cook — but fish dishes are essential. First place goes to caviar, followed by herring in spicy brine, sturgeon, salmon, sterlet and, finally, sardines and sprats. Russian brine is different from the Northern European version: there is none of the dill that Russians love so much, but there is ginger and coriander seeds.

The smoked fish for filling can be hot or cold, salty or unsalted, or prepared with herbs and steamed.

The next candidates for fillings are mushrooms, cheese and crumbly buckwheat porridge. Some people also enjoy using boiled tongue and various cooked meats as fillings. Dessert means more pancakes, but served with jam and honey (preferably white) this time.

This Slavic festival is marked not only by eating pancakes but also by riding on troikas and parading around the Maslenitsa effigy, which symbolizes the harsh winter. The most charming carnival tradition of Maslenitsa is the conquest of the snow town: one team builds a snow fortress and defends it, while the other tries to destroy it.

Fortunately, the tradition of fist fights ended by the time the Soviet government came to power. In the old days, the young men and youths of various districts used to gather in an agreed upon place and test their strength in a showdown. There were a few rules: kicking and using brass knuckles or other objects to add weight to your fists was not allowed; still, serious injuries and even deaths occurred regularly among those taking part. Nowadays, soccer fans still engage in this kind of amusement, but without regard to the Lent calendar.

But let’s not talk about hooligans: let’s stick to pancakes. We can credit the Soviet period not only with putting a stop to fist fights but also with a pancake recipe that was nowhere to be found in cook books before the revolution.

1. Mix the milk, slightly warmed, together with the beer. Keep stirring and add flour.

2. Carefully mix the batter, adding the eggs, vegetable oil or melted butter, sugar or white honey, salt, and, just before you finish mixing, baking soda. The more fluid the batter, the thinner the pancakes will be — experiment and find out how you like them.

3. The pancakes must be cooked in a cast-iron frying pan: do NOT wash it; instead, warm it and wipe it with a napkin before using it.

4. Traditionally, the frying pan is greased with half of a raw potato on the end of a fork. Cook the pancakes in a very small quantity of melted butter.

5. Put the finished product — they should be a beautiful dark red in color — into piles and pour melted butter over them. Guests can make their own fillings, though this differs from the way Hungarian and Czech cooks make their pancakes.